All 22 film breakdown: How the 49ers found their offensive identity against the Rams

An All 22 Footage breakdown illustrating how the 49ers dominated the Rams by returning to smash mouth football and play action passing.

Share All sharing options for: All 22 film breakdown: How the 49ers found their offensive identity against the Rams

On Thursday night, the 49ers we know and love returned. Wide receivers were replaced with tight ends and full backs as the smash mouth football that has become analogous with the 49ers reemerged. Behind their monstrous offensive line, the 49ers pounded the Rams for over 200 yards rushing and opened up the play action passing game. While the Rams presented little resistance, the 49ers seemed to have found their offensive identity again.

Establishing the run: After three weeks, Frank Gore was averaging less than 50 yards rushing per game and the 49ers had attempted more passes than rushes. This meant the onus of their offense was placed solely upon Colin Kaepernick's shoulders, who despite leading the 49ers to the Super Bowl has only 14 starts under his belt. That changed Thursday, when the 49ers ran the ball early and often in order to stabilize their offense.

Due to the lack of outside weapons, opponents had been bringing the 8th man in the box to stop the run and Thursday was no different. The Rams routinely brought up one of their safeties and loaded up against the run. The 49ers attacked it differently, instead running directly into an 8 man front, they used wham blocking plays to take advantage of the Ram's aggressiveness against them. This play demonstrates how the 49ers used non-traditional running plays to jump start the running game.

Pre-Snap: The 49ers are in their 22 personnel with WR Anquan Boldin out wide left, TE Vernon Davis in line right, TE Vance McDonald motioning across the line to the left and QB Colin Kaepernick in the I-formation with FB Bruce Miller and RB Frank Gore. The Rams counter with their base 4-3 personnel with SS Darian Stewart in the box lined up over Davis. 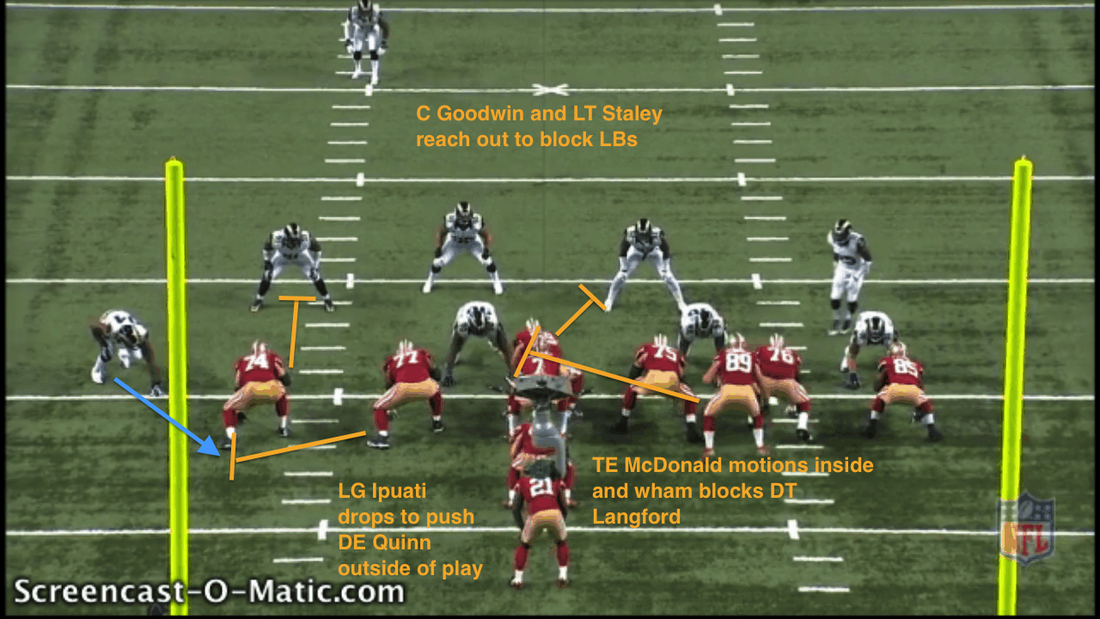 Post-Snap: The 49ers executes a wham blocking scheme; C Goodwin lets DT Langford into the backfield for TE McDonald to block. This allows Goodwin to get to the second level to block the WLB. On the left side, LT Staley shoots forward to block the SLB while LG Iupati slides over to block DE Quinn. 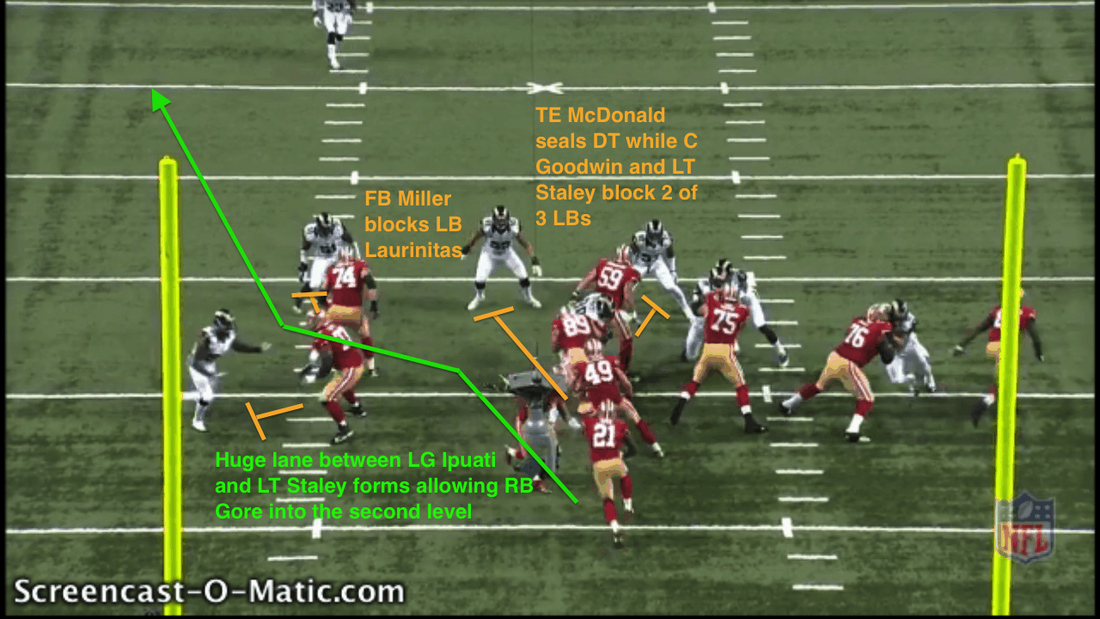 FB Miller blocks MLB Laurinaitis and the blocks provided by Goodwin and McDonald seal off SS Steward from impacting the play. RB Gore takes the handoff and jump cuts off Miller's block into a running lane between Staley and Ipuati. 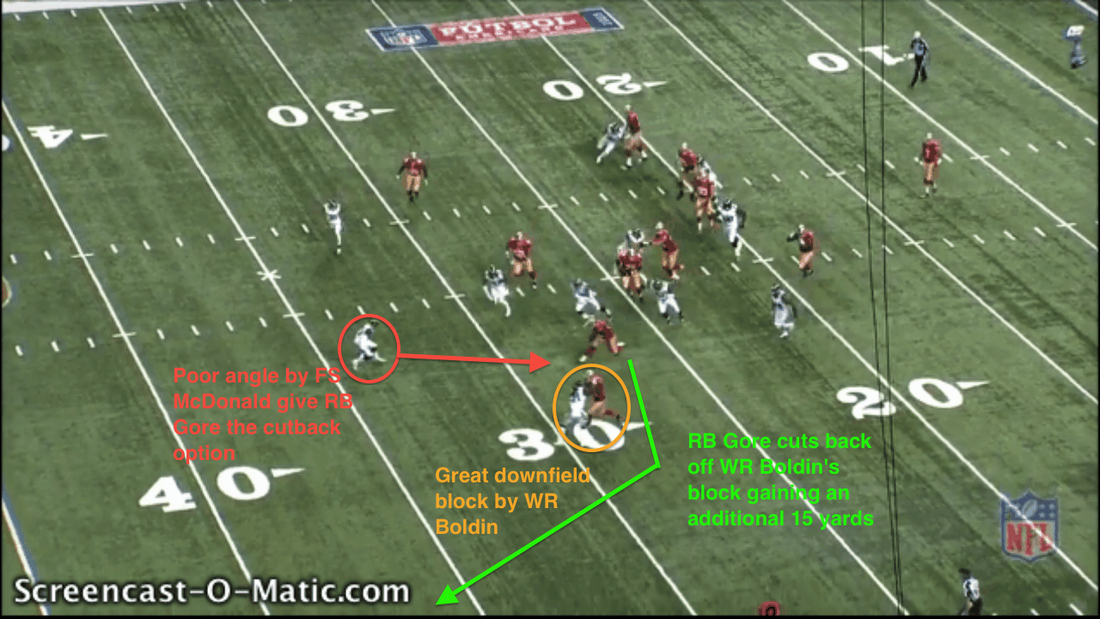 In the secondary, WR Boldin manhandles CB Jenkins 10 yards downfield preventing him from making a play. Gore attacks up field at FS McDonald only to cut off Boldin's block to the outside, gaining an angel on McDonald. WLB Olgetree eventually pushes Gore out of bounds for after a 27 yard gain.

Summary: The wham play is one of the 49ers change of pace running plays that can be effective if DT gets far enough up field for the TE to block. On this play, McDonald contained Langford and allowed the OL to take out the second level creating a huge running lane for Gore. A pair of sweet cuts by Gore turns this solid gain into a big one that helped get the 49ers offense rolling.

After two games of countering the 8 man boxes with pass plays, Jim Harbaugh decided to return to 49er football with 2 TEs and 2 RBs. Using power personnel with a change up strategy like the wham play is the essence of 49er football. This combination of physicality and creativity helped establish the running game and ultimately the 49ers offense.

Play action passing game: A good running game is often called a quarterback's best friend. This was evident in St Louis the 49ers run game opened up the passing game for Kaepernick. A combination of play action, bootlegs and single high safeties allowed Kaepernick to settle into the game early. Compared to the previous weeks, which featured shotgun sets with multiple receivers giving their young quarterback lots of responsibility, the 49ers put Kaepernick in a position for success. Here is the first offensive play for the 49ers demonstrating how Greg Roman was setting up Kaepernick for easy throws.

Pre-Snap: the 49ers are again aligned in their 22 personnel with WR Bolding out wide left, TEs Davis and McDonald inline right and QB Kaepernick in the I formation with FB Miller and RB Gore. The Rams are in their base 4-3 defense with SS Steward walking forward. 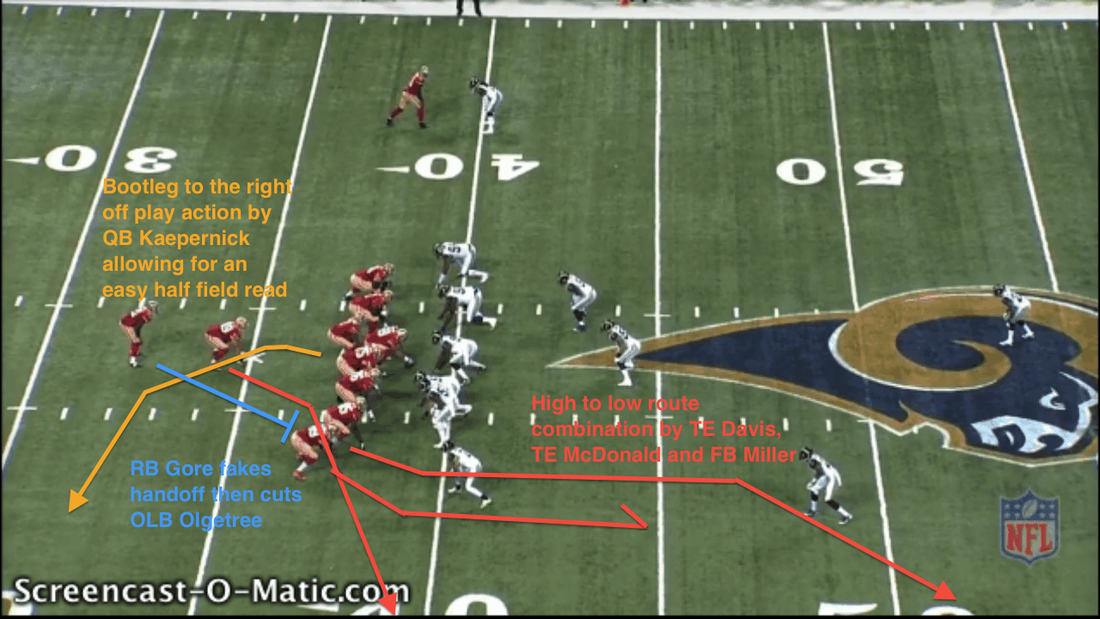 Post-Snap: A play fake to Gore off tackle right allows Kaepernick to bootleg to his right. The three receiver on the right run a high, mid and low options for Kaepernick: Davis runs a corner, McDonald a 10 yard turn around and Miller a flat route. 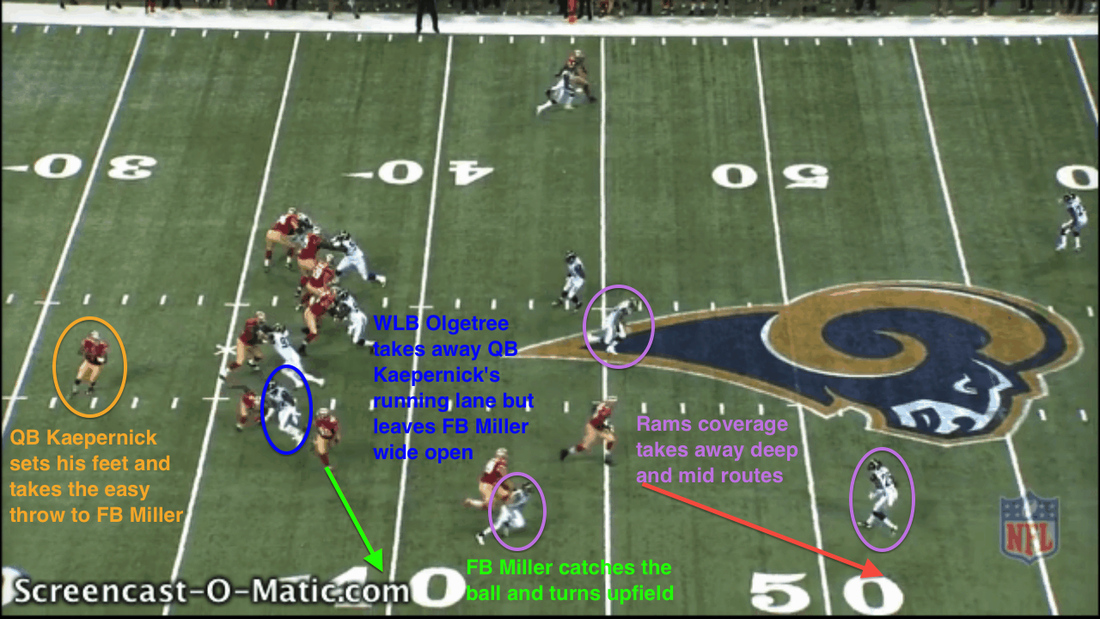 Once outside the pocket, Kaepernick is only responsible with reading half of the field and sees the Rams deep zone taking away Davis and CB Finnegan covering McDonald. In addition WLB Olgetree has gotten caught in no man's land between QB Kaepernick and Miller, allowing for the simple throw to Miller which results in a 11 yards.

Summary: Even thought this was the first offensive play, the threat of the 49ers run game was present because the Rams expected the 49ers to take pressure off Kaepernick. Later in the game, after the 49ers had established a run game, they continued to run multiple bootlegs off play action to give Kaepernick a series of easy throws and the option to run. Theses roll-outs limited his reads to half field while getting him on the move where he's proven to be more comfortable than in the pocket.

Once outside the pocket Kaepernick is presented with the classic high-low read, an easy progression to run through. The combination of easy decisions and the fall back of running the ball helped ease Kaepernick into the game and gain confidence, especially important after the two worst games in his career.

Simple passing plays with a confident quarterback: Even though Kaepernick had found his rhythm, the 49ers continued to pass the ball conservatively. When it wasn't play action, the pass plays were often quick throws that were designed to limit the need for progressing through multiple reads. These quick plays, along with the return of Vernon Davis, allowed Kaepernick to succeeded passing the ball for second time this year.

Pre-Snap: The 49ers are in 22 personnel with FB Miller and TE Davis aligned inline left, OL Synder as the 2nd TE inline right, WR Boldin in motion to the left and RB Hunter in the backfield with QB Kaepernick under center. The Rams are in their base 4-3 with backup FS Giordano in the box covering Davis and a single high safety. 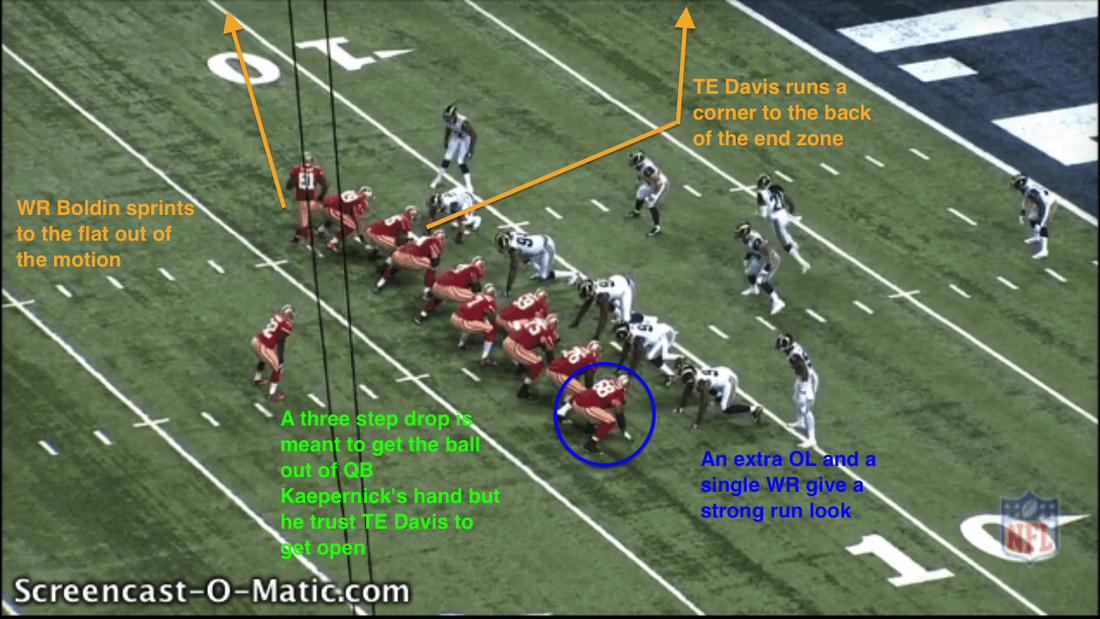 Post-Snap: Boldin continues running left off his motion into a short flat route just past the first down marker. Kaepernick hits the final step of his 3 step drop but decides not to throw quick hit. Instead he drops back further and resets his feet while shifting his vision to Davis's corner route. 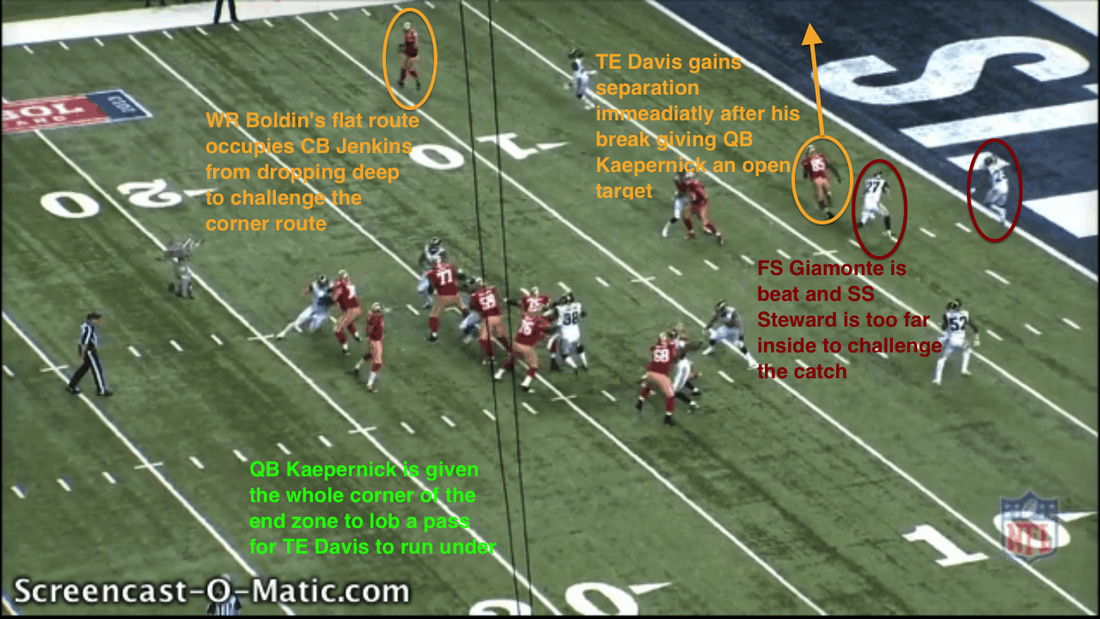 Davis gets on top of Giordano and breaks into the wide open space in the corner of the end zone away from the single safety. Kaepernick simply lobs the football into the end zone and allows Davis to run under it for an easy 12 yard touchdown.

Despite Boldin being open for the first down, Kapernick decided to shift his attention to Davis, as he knows Boldin is occupying the corner underneath. This was a clear demonstration that Kaepernick was playing with confidence, not only in himself, but also with his receivers ability to beat the coverage. Ultimately, this play came down to Kaepernick having the belief that Davis would be able to get to the corner of the end zone first. He did and a simple touchdown was the result.

After both Seattle and Indianapolis exposed the 49ers' passing offensive, the 49ers returned to their roots with a healthy dose of Frank Gore. Once the running game was established, the 49ers were able to put Kaepernick in easier situations off play action and eased him into the game. This is not new for the 49ers, the offense Thursday night looked more similar to the Alex Smith days than the Super Bowl run with Kaepernick.

While some might see that as a regression, it was the only logical decision given the lack of weapons on the outside. Instead of putting their faith in WRs like Kyle Williams, Jon Baldwin and Quinton Patton, the 49ers let their dominant offensive line decide the outcome.

Following the game, many analysts pointed out that the game said more about the Rams being bad then the 49ers being good. And they were right, the Rams are one of the bottom teams in the league, but given the past two games, it was refreshing to see the 49ers prosper using the offensive identity that was responsible for so much of their success in recent years.