Week 1 brings a familiar face to San Francisco. The Niners played Green Bay twice last year, winning both contests. There are some significant changes on both ends. The games in the 2012 season were fairly high scoring and delivered several favorable fantasy performances. Here is a quick breakdown of the players and what to expect.

The road to fantasy football glory begins in just a matter of days. It's been a long time, but it'll be worth the wait.

To briefly introduce this series - each week we will discuss the 49ers through the scope of fantasy football. By taking a look at the relevant fantasy options on both teams we'll preview the matchup and highlight key playmakers.

Week 1 brings a familiar face to San Francisco. The Niners played Green Bay twice last year, winning both contests. There are some significant changes on both teams. The 49ers will be without their top receiver Michael Crabtree and the Packers lost Greg Jennings and Donald Driver, but added rookie Eddie Lacy to improve their rushing attack.

The storyline here is Colin Kaepernick's return to the scene of his greatest performance of his young career. One for the history books for sure, but without Crabtree is there enough talent around him for a proper encore?

The two games last season yielded several favorable fantasy performances. Here is a quick breakdown of the key players this year and what to expect:

49ers vs. Packers: All you need to know 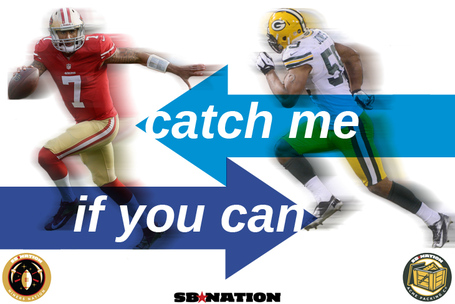 Had Kaepernick's last performance occurred during the regular season it would have been an instant fantasy classic. We would have been talking about one of the greatest fantasy lines by a player since Michael Vick's Monday Night Massacre of Washington a few years back. Don't expect another 400 total yards and 4 touchdowns from Kaep in week 1, but he'll be one of the better options at QB to start the season. We'll see if Clay Matthews and company have learned how to keep their eye on #7. Green Bay's defense isn't horrible, but they aren't a huge factor when planning your fantasy roster. Start Kaepernick with confidence, he'll be a top 7 QB this week.

I you have another RB2 level option on your roster you may want to wait a week before allowing Lacy to make his fantasy debut. The only Packer running back who had any measure of success against this defense in 2012 was DuJuan Harris and he is on IR. Lacy is a strong power runner who prefers to go between the tackles. A wise strategy for his size and speed, but it's going to be a long day if the front 7 for the Niners are on their game. Lacy is normally a strong RB2, but he is closer to a flex option this week.

Kaepernick can move the ball downfield efficiently, but I doubt San Francisco wants to trade punches with an Aaron Rodgers led offense. The 49ers will work to see very little of Aaron Rodgers on the field Sunday. Gore is just the man for the job. The grueling rusher will grind away at this defense much as he did in 2012. He may not make it 3 100 yard games in a row against the Packers, but he is good bet for a TD and a quality RB2 option.

The versatile wideout made quite a splash in week 1 last year totally 9 receptions for 77 yards. Greg Jennings is out of the picture now, which should open Cobb up for more short routes designed to put him in open space. This group of receivers are a secondary's nightmare and Cobb is about as dangerous as anyone of them. He finishes with the best fantasy score of any receiver in this matchup.

Out of his 68 receptions in 2012, 14 were TDs. Yes, I agree, that is insane. Jones tends to be relatively touchdown dependent, but that is good news this week. He hit pay dirt once in each contest against San Francisco last year. With his past success against this secondary I'd feel comfortable starting him as a WR3 this week.

Nelson is a solid play in PPR leagues, but those in standard formats have reason to be concerned. The Green Bay receiver may need a few snaps to shake off the rust, as he only appeared in one preseason game after offseason surgery. Jones will probably be the most frequent deep option, which leaves Nelson with plenty of chances to do damage running intermediate routes. Nelson averaged 5 catches and 80 yards in the two 2012 games. I wouldn't expect much more from him Sunday.

Out of the receivers most likely drafted this year in fantasy, Boldin brings up the rear. The big bodied vet should be able to grab plenty of balls from Kaepernick , but I'm more inclined to sit him in standard formats. If you set the over/under on Boldin's receptions at 5, I'd take the over, but until we see him develop into a legitimate red zone option for San Francisco it's best to exercise caution in leagues that only factor in yards and touchdowns.

Finley's preseason hype has been louder than usual. With Jennings now in Minnesota, the perennially overvalued tight end stands to see an increase in targets. He did have a useful stat line week 1 against the 49ers back in 2012 (7/41/1), but was kept out of the end zone in the playoffs. The Niners generally excel at defending the tight end so keep your expectations low for Finley week 1.

Vernon never put up big numbers last year against the Packers, but he should stand to see a significant increase in targets on Sunday. This should be a relatively high scoring game and San Francisco will need to utilize all their advantages on offense. Green Bay's ability to stifle tight ends puts a limit on his upside, but he is one of the team's few deep threats so the chance for a long TD reception is there.

With LaMichael James out, Hunter is going to see more action. He'll have his fair share of opportunities while spelling Gore throughout the game. He went for 41 yards on 9 carries the last time he played Green Bay. Don't be surprised if he gets 10+ total touches and mixes in a 20 yard TD run.

What player not featured do you think has the best fantasy game?