We're back! The 2013 NFL Season is just about here and with it comes another season of The Booth Review authored by yours truly. While the San Francisco 49ers have yet to kick off, take this piece as a preview of what's to come. It's a brand new year, a brand new team, and a brand new format.

Take a deep breath. Football is in the air.

If you're still nursing any ill will or bitter feelings from yesteryear - and I imagine there's at least a few of you - it's time to let go. Seriously. The season has arrived, and for our beloved San Francisco 49ers, that means a clean slate and a new opportunity.

Historically, teams who have gone far in the playoffs in the previous year suffer major casualties the following offseason. The most recent example of this is the defending Super Bowl champion Baltimore Ravens who lost ...*takes a deep breath*... Ed Reed, Bernard Pollard, Paul Kruger, Dannell Ellerbe, and Cary Williams to free agency. On top of that, future Hall of Fame linebacker Ray Lewis and two-time All-Pro center Matt Birk decided to hang up their cleats for good. And of course, Anquan Boldin traded in purple and black for scarlet and gold. That's a laundry list of losses, folks. And while it may be an extreme example, it illustrates my point. 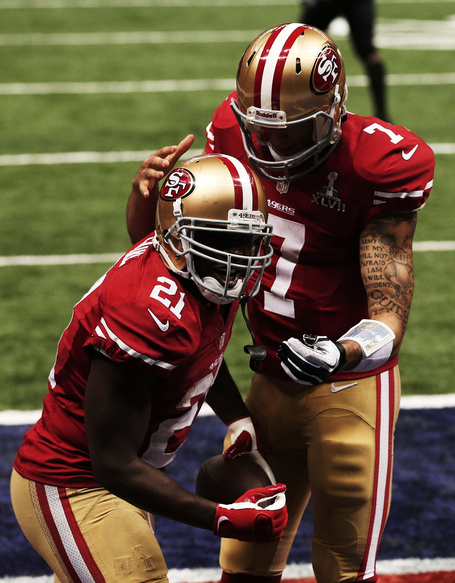 Simply put, playoff teams typically don't return the following season as the same squad. Yet, somehow, San Francisco has managed to buck the trend for the last two years now. Going into the 2012 season, the Niners returned a team that was virtually the same from the previous year. And this past offseason, the most notable free agent losses were tight end Delanie Walker and safety Dashon Goldson. That...was pretty much it.

General manager Trent Baalke and the front office were able to offset those losses by drafting Rice tight end Vance McDonald and LSU safety Eric Reid - both of whom have shown immense promise in the preseason. McDonald has been slotted as the second tight end behind Vernon Davis and Reid has been penciled in as the starter.

The essence of the team remains the same. Postseason superhero Colin Kaepernick enters his second season as the Niners' starting signal caller. San Francisco's all-time rushing king Frank Gore is back, as is All-Pro tight end/freak-athlete Vernon Davis. And that nasty defense we've all grown to know and love has gotten even nastier.

On paper, there's not a team in the league with more talent and depth. But as we know, perfect on paper seldom translates to perfect on Sundays.

The biggest question - how will the loss of Michael Crabtree affect the offense?

Beyond Kaepernick, Crabtree was arguably the Niners' most important offensive player last season. Consider he was the first 49ers receiver to eclipse 1,000 yards since Terrell Owens in 2003. He was also, far and away, the most targeted receiver on third-downs once Kaepernick took over in Week 11. Crabtree ran 64 routes on third down and was targeted 26 times - that's a third-down target rate of 40.6%.

"His whole approach to this game is something we all can learn something from. He’s so serious about it. He doesn’t play around." - Kyle Williams, on Anquan Boldin

The acquisition of veteran receiver Anquan Boldin, in exchange for a measly sixth-round draft pick, should anesthetize much of the pain from Crabtree's absence. By all accounts from OTAs, Boldin was as prolific on the practice field as he was on the sidelines and in the locker room.

"[Boldin] has been so good with the younger guys, trying to teach them how to be professionals," receiver Kyle Williams told Jim Trotter of Sports Illustrated. "He’s not just teaching them what to learn, but how to learn it, how to learn concepts and how you can see certain things in coverages. I think his whole mentality, his whole approach to this game is something we all can learn something from. He’s so serious about it. He doesn’t play around."

I have no reservations about what Boldin can do. My reservations lie in the guys behind him. Let the record stand - I expect a 'breakout' year from Williams, but he may be better suited in the slot. Rookie receiver Quinton Patton hit the ground running and made some impressive plays in the last two weeks of preseason, but in the words of Allen Iverson, we talkin' about preseason. And I need not remind you of a certain running back named Thomas Clayton who tore it up in exhibition play...

All jokes aside, Patton does excite with the potential to become another explosive piece of the Niners' offensive puzzle, but he is exactly that - potential. And remember that Williams is coming off of a torn ACL injury. Crabtree and Mario Manningham, another victim of a torn ACL, will become options much later in the season. Until then, it could be a rocky ride for the receiving corps. 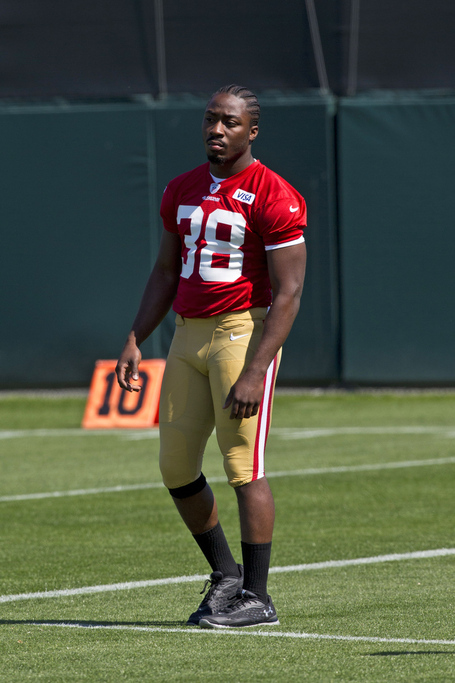 RETURN OF THE KING

San Francisco boasted the fourth-best rushing attack during the regular season last year, gaining 2,491 total yards on the ground and averaging 155.7 rushing yards per game (one has to wonder how much higher they would have ranked had Kaepernick started the entire season).

Over the years, the Niners have transitioned into more of a committee approach with their running backs. Don't be mistaken - San Francisco's all-time rushing leader Frank Gore is still the champion of the stable, but Kendall Hunter and LaMichael James will certainly be eating off of Gore's plate this year as they have in previous years.

For now, the running game may be the area of least concern. Looking ahead to the not-so-distant future, however, there may be a change of the guard coming soon.

Marcus Lattimore battled through a grueling rehabilitation process after tearing the anterior cruciate, lateral collateral and posterior cruciate ligaments (ACL, LCL, and PCL) of his knee last October. Originally projected as a first-round selection, Lattimore was removed from some teams' draft boards entirely after the injury. Baalke and company took a gamble and selected Lattimore in the fourth round. It was one of the feel-good stories of the 2013 NFL Draft.

Gore knows all too well the trials of overcoming such a devastating knee injury. And he also knows what it feels like to be passed up as a result of it.

"You always compete with the guys who went in front of you...I told [Lattimore], whenever I'm done, remember that." - Frank Gore

Head coach Jim Harbaugh has done good to slow down the rehabilitation for Lattimore and afford him the time to properly heal. Don't expect to see him suit up this year, but come next season, Lattimore may be the one sitting on the throne.

Since exploding onto the scene halfway through the season last year, Colin Kaepernick has experienced a rare, meteoric rise to stardom, both on and off the field. He won an ESPY for "Breakthrough Athlete of the Year", graced the cover of GQ magazine, showed off his tats in ESPN Magazine's body issue, and had the pleasure of meeting First Lady Michelle Obama. Many were quick to criticize Kaepernick for all of his extracurricular activities this offseason.

Am I worried? Nope.

I was featured as a guest on a podcast with the guys from Rams Addiction a few months ago as a part of their "Know Your Enemy" series. One of their most pertinent points of discussion was Kaepernick.

"I'm still waiting for someone to say [they're] concerned about putting all of [their] faith in a guy that's only had ten career starts at quarterback," said co-host Anthony Bafaro.

Am I worried? Nope. 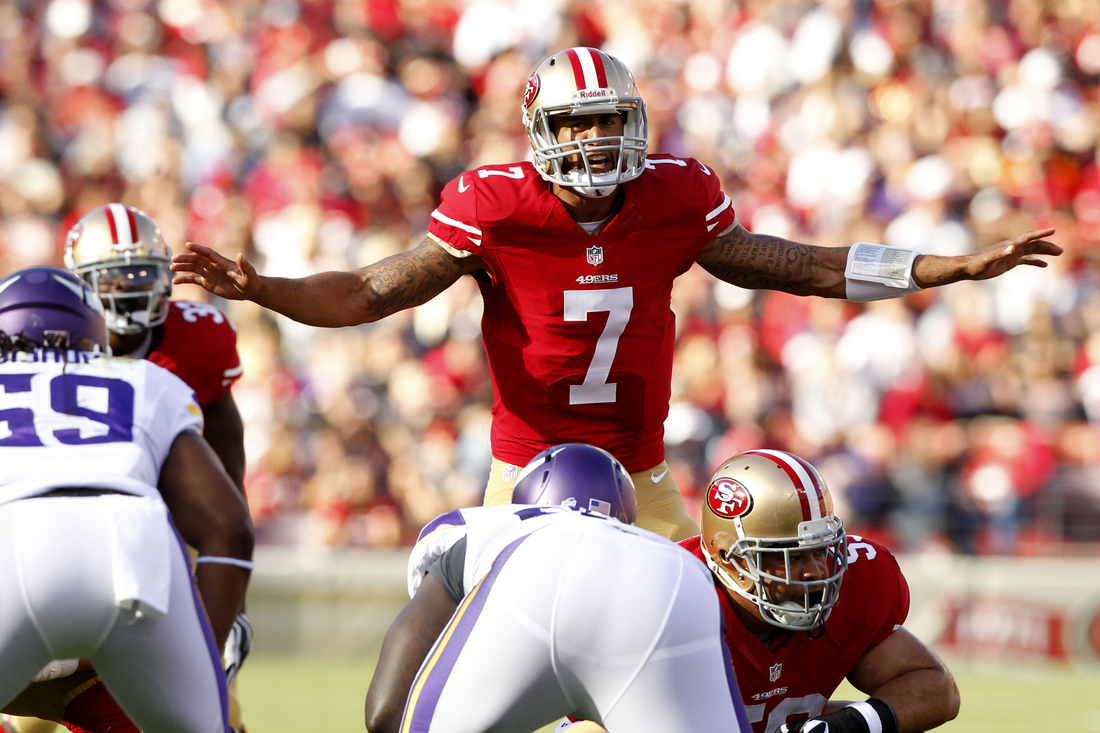 "I'm still waiting for someone to say [they're] concerned about putting all of [their] faith in a guy that's only had ten career starts at quarterback." - Anthony Bafaro, Rams Addiction

Quite frankly, Kaepernick is about as close as you can get to a 'perfect' quarterback. He's got the stature, all of the physical tools, god-given athleticism, and a remarkable football savvy. I've said it before, and I'll say it again - Kap is that ridiculously overpowered quarterback that I would create in Madden that has "99" ratings in every attribute.

With that said, I think Kaepernick's most impressive trait, above all else, is his matured veteran approach to the game of football. He has an unshakeable respect and humility in conjunction with a zen-like discipline. He is, and forever will be, a student of the game with an insatiable penchant to get better.

Ball up everything I just said, and maybe you'll understand why I pay no mind to what Kap does in his spare time. Or why I don't question the fact that he is the presumed franchise quarterback despite having started just ten games.

Maybe I'm wrong, maybe I'm right. Only time will tell. But at least one former NFL quarterback shares my sentiment.

"I truly believe Colin Kaepernick could be one of the greatest quarterbacks ever," said Ron Jaworski, current ESPN analyst and former Philadelphia Eagles quarterback. "I love his skill set. I think the sky's the limit."

I can't wait to find out.

The Niners' defense finished the 2012 regular season ranked third-best in total offensive yards allowed (4,710) and second-best in average points allowed per game (17.1). Heading into the 2013 season, their defensive unit returns 9 of 11 starters from a year ago. 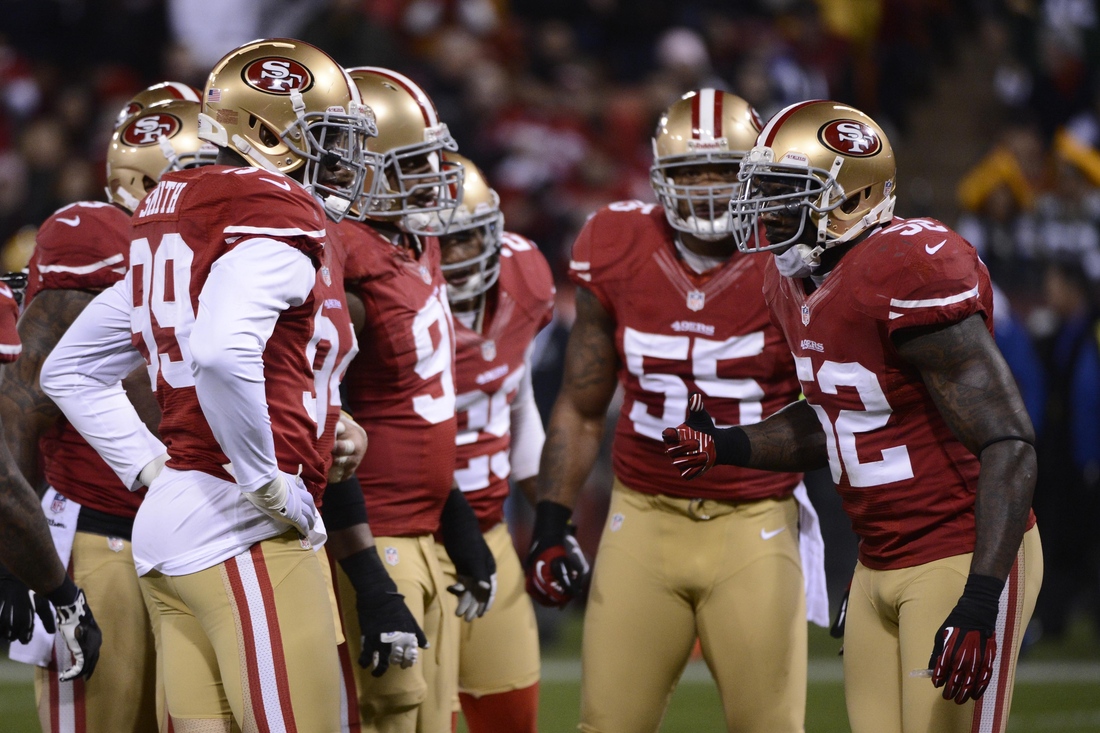 Of the two new starters, one, nose tackle Ian Williams, was already on the team. In my mind, Williams was one of the most impressive performers this past preseason, and it came as no surprise that he was able to stave off free agent addition and former first-round draft choice Glenn Dorsey.

"Nothing against Isaac [Sopoaga] or Ricky [Jean-Francois], but we think [Williams is] an upgrade," admits defensive tackle Ray McDonald.

"We're the San Francisco 49ers. We can do whatever we want." - Jim Harbaugh

The other new starter is first-round rookie Eric Reid who is tasked with filling the shoes of All-Pro safety Dashon Goldson. As I wrote about in my review of the Niners' exhibition game against the Minnesota Vikings, Reid had a limited amount of time to prove his worth as a pass defender, but he did deliver several big hits this past preseason akin to his predecessor. I don't expect 'The Lumber Co.' to miss a beat.

Pass-rush extraordinaire Aldon Smith, who recorded 19.5 sacks last year and 14 the year before, thinks he can do even better. Not only does Smith believe Michael Strahan's sack record (22.5) can be broken, but it can be shattered at 30.

"It's all about consistency and keeping that 'feel' the whole season," Smith told Clark Judge of CBS Sports. "And once you get close to it, not letting the hype mess you up.

"Hopefully, the record gets broken. It's something I want to do before I'm done playing."

Opposite of Smith is Ahmad Brooks, who is no slouch himself having recorded 13.5 sacks of his own over the last two years. And behind the two veterans is third-round draft choice Corey Lemonier who was another rookie that turned in an eye-opening preseason performance.

All in all, San Francisco's defense looks to pick up right where they left off last year.

In 2011, the Niners reached the NFC Championship Game. Last year, they took one step further by making a Super Bowl appearance and came within five yards of glory. Will the Niners take the final step and win it all this season?

It's a long road, but the journey starts on Sunday.