The San Francisco 49ers don't get going until Sunday afternoon. In the meantime, we've got a host of great games in the morning. We've got an open thread for Chefs Watch, the Seahawks and so much more.

Welcome back, football! After a looooong wait, the NFL is truly back in our lives. The preseason was a nice appetizer, but this is what it's all about! The 49ers will be on a little later, but we have a full serving of football at 10:00 a.m. PT. Today likely will not make or break seasons, but it will get us moving one step toward the end goal.

There's a lot of great football today, with the Falcons-Saints game potentially leading the way. However, there are two particularly pertinent games for the 49ers. Of course, all Seahawks games are interesting, and this one particularly so as Seattle heads east to face the Carolina Panthers. I picked Carolina in this one. I'm sure some homer-ism is playing into that, but I also think the Panthers are a sleeper this season, and can win this game. We'll see if they make me look good.

The other game of note is Chiefs-Jaguars. Chefs Watch is officially in full force, as we wait to see just what the Chiefs can do to help the 49ers in the 2014 NFL Draft. We want the Chiefs winning games, as they need eight wins to get the 49ers a second round pick. Can't be losing to the Jaguars! And of course, this is Alex Smith's first regular season game with the Chiefs. There's a lot of good football this morning, but I do plan on catching at least a little bit of this one.

Beyond that, it should be a fun day with Bengals-Bears, and we could even see some fun with Vikings-Lions, and maybe Dolphins-Browns. I actually think the Browns could be kind of decent this season. 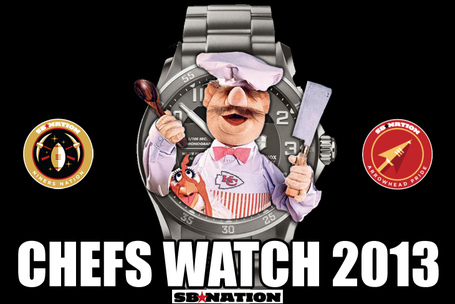