San Francisco's short-yardage offense has been among the worst in the league this season. We take a look at what's plaguing the 49ers in these situations.

While watching film yesterday of the 49ers-Cardinals Week 17 game, I found myself frustrated after several more short-yardage failures. This isn't a new thing, of course. I'm sure most of you have had similar frustrations when the 49ers send out an extra offensive lineman or two and run the ball into a pile of bodies only to come up short. All too often those situations are then followed by Andy Lee or Phil Dawson trotting out on to the field, which can be nearly as frustrating.

Watching that exact scenario play out three different times in the Cardinals game got me thinking about just how bad the 49ers have been in short-yardage situations this season. Do they really just run power from a jumbo formation over and over and over again? It's common for fans or analysts to get narratives stuck in their head about a player or team and continue to run with them, even if they're not necessarily valid. I needed to know if that was happening with me and the 49ers' short-yardage offense.

Let's start with the basic numbers. I'm defining a short-yardage situation as third or fourth down plays with two yards or less to go to convert for either a first down or touchdown. On the season, San Francisco has had 42 such plays. They converted on just 54.8 percent of those plays, the fifth-worst rate in the league. The 49ers run the ball 69 percent of the time in short-yardage situations, well above the 55.1 percent league average rate.

On the surface, that seems to mostly confirm the perception regarding the 49ers short-yardage offense. They're among the worst in the league at converting those situations and they run the ball more than two-thirds of the time, a good amount more than the rest of the league. But digging a bit deeper, I found some interesting things.

Now, it's important to point out that we're talking about roughly three quarters worth of offensive plays here. A sample of that size is going to be subject to a fair amount of randomness. But going from first to worst is obviously a drastic change. So what changed in the second half of the season to cause that sharp of a drop in the 49ers' short-yardage success rate? The playcalling.

I went back and re-watched all 42 of the 49ers short-yardage plays from this season and charted the personnel and play type that they used in each. As I mentioned before, from a personnel standpoint, picturing the 49ers' short-yardage offense conjures up images of extra offensive lineman and tight ends. There's definitely weight to that sentiment. Heavy personnel – which I defined as any time the 49ers had one or zero receivers on the field – has been far and away the 49ers' predominant personnel package in these situations throughout the entire season.

The difference has been the way the 49ers have used that heavy personnel. In the first half of the season, there was much more variety in the types of formations and plays that San Francisco used with this personnel grouping. Sure, there were still power runs to the strong side of an I or Offset I formation – the 49ers ran power six times in their 20 short-yardage plays in the first half of the season and converted five times, including a 34 yard touchdown run by Frank Gore against the Rams. But there were also instances in which they would line up in a Shotgun or Pistol formation and spread things out a little bit as they did here against Tennessee: 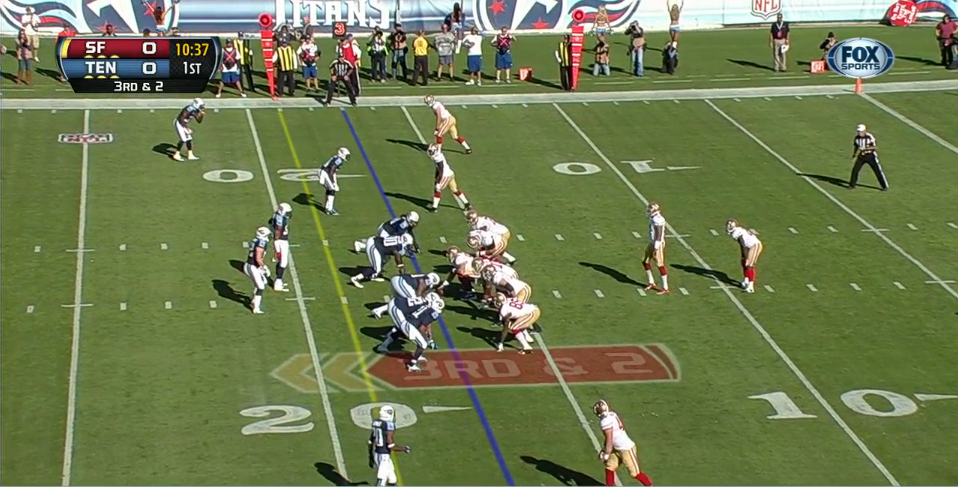 The added variety – both in formations and types of plays – no doubt contributed to the effectiveness of the 49ers short-yardage offense in the first half of the season. Since the bye week, that's variety hasn't been nearly as prevalent. Especially in regards to formations. Something that looks like this is happening far too often: 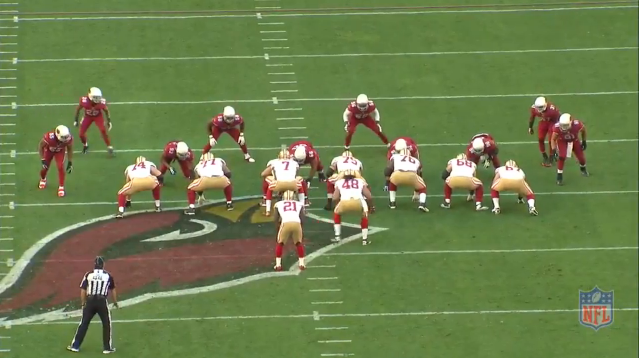 As the 49ers have become more predictable in their short-yardage playcalling, defenses are adjusting as well. When San Francisco lines up in a heavy Offset I formation like the one in the screenshot above, defenses are waiting for the motion player – and there's always a motion player, be it a fullback, tight end, or extra offensive lineman – and then overloading or cheating to that side of the field and are blowing up these runs before they ever get going.

One thing that has been mysteriously absent from the 49ers' short-yardage package all season long is the quarterback sneak. Colin Kaepernick has only run a quarterback sneak one time this season, a conversion in the first Seattle game. Going into this season, the quarterback sneak has converted in short-yardage situations 85.9 percent of the time league-wide since 2009. With the large bodies up front that the 49ers have and the minimal amount of movement needed to convert on a sneak, it's incredible that the sneak has been essentially nonexistent in the 49ers playbook.

As the 49ers begin their playoff run, this is an area that Jim Harbaugh and Greg Roman are going to need to address. These aren't situations that come up frequently – about three times per game on average – but they are often crucial moments when they do. With the increased team quality and competitiveness that you have in the playoffs, the difference between a conversion that leads to a touchdown and a failure that leads to a field goal could be the difference in the game.