All 22 Breakdown of Colin Kaepernick and the 49ers Designed Scrambles

An in depth analysis using All-22 film of how the 49er receivers ran phantom routes to position themselves to block for Kaepernick's 58 yard scramble in the NFC Championship game.

Share All sharing options for: All 22 Breakdown of Colin Kaepernick and the 49ers Designed Scrambles

After bursting onto the scene in the 2012 playoffs with his NFL record 181 yard rushing game vs the Packers, Colin Kaepernick was seemingly hesitant to tuck the ball and run during the 2013 regular season. Yet when the stakes got higher in January the 49ers unleashed their dual threat quarterback and he took off, running the ball a whopping 26 times for nearly 250 yards in only 3 games.

While Kaepernick torched the Packers again for over a hundred yards rushing, his 58 yard scramble against the Seahawks in the NFC Championship Game was not only a highlight reel play, it was a called run. What looked like a botched pass play was actually a designed running play where the 49er receivers released downfield to position themselves for blocks instead of attempting to get open.

Let's look at how the 49ers found success by allowing Kaepernick to do what he does best, run, on this ‘designed scramble'. 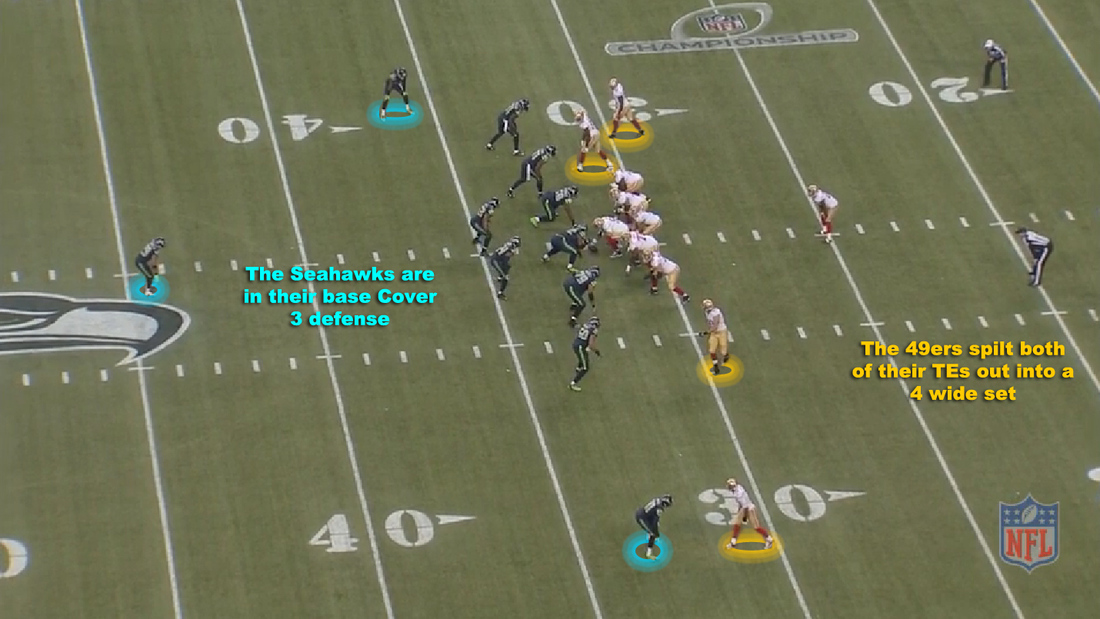 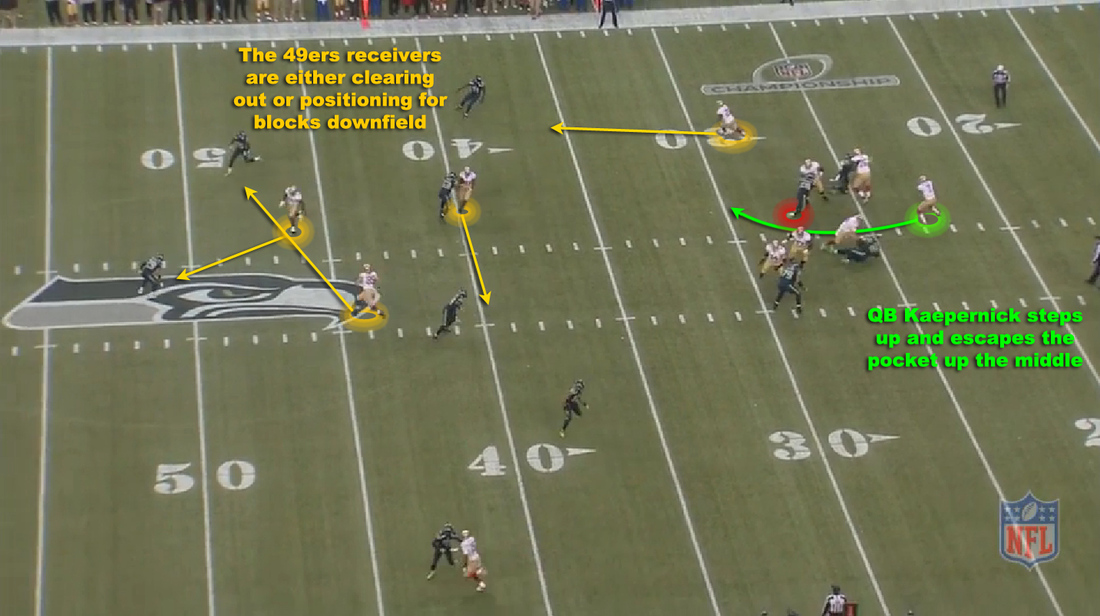 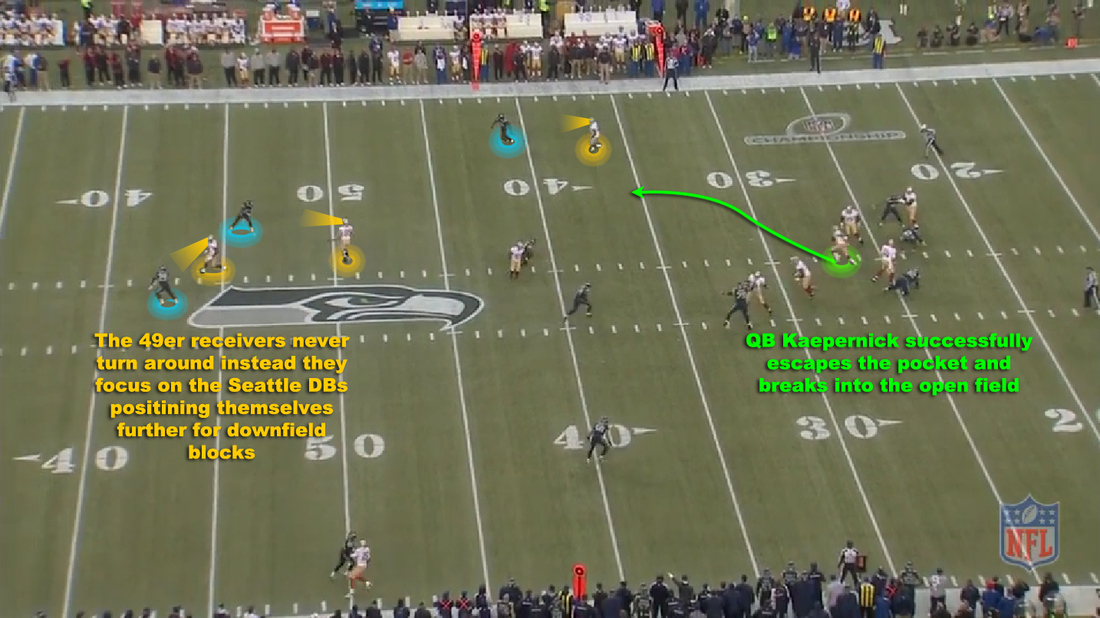 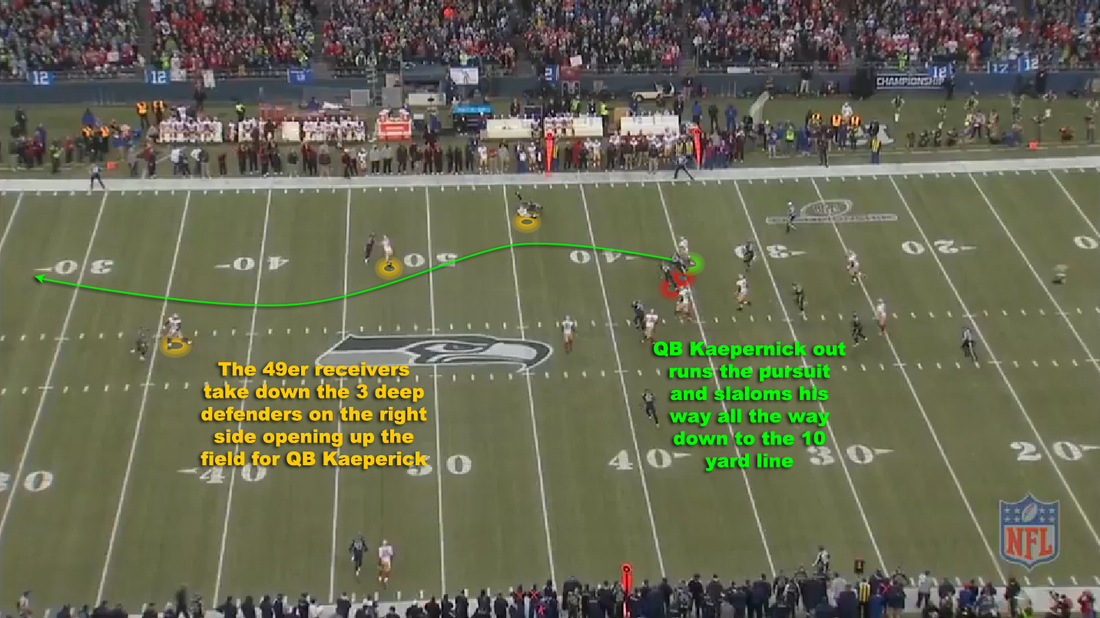 Summary: While watching the game live I was convinced this was a pass play that Kaepernick simply scrambled out of. But after hearing Earl Thomas following the NFC Championship talking about how the 49ers ran phantom routes to open space for Kaepernick to scramble, I checked the tape and sure enough there were a few ‘designed scrambles'. Its also obvious that this particular play was designed to attack the Seahawks base Cover 3 defense with TE Davis going to get S Earl Thomas, TE McDonald coming across to block Sherman, RB Gore leaking out of the back field to cut Chancellor and WR Boldin clearing out the middle underneath zones with a drag route, creating a distinct lane for Kaepernick to attack.

With the backend of the defense accounted for, all Kaepernick had to do was escape the pocket and use his speed to carve through the open field. Disappointing for 49ers fans was his inability to finish the run and get into the end zone but the 49ers converted the 1st and goal opportunity and took an early 10-0 lead.

As we know now that lead did not last but the use of Kaepernick's legs was creative and effective, through these and more traditional quarterback runs. Kaepernick will likely return to the pocket in the upcoming regular season to protect himself from the hits that come with scrambling but if the 49ers return to the playoffs expect Jim Harbaugh and Co. to dial up more of these designed quarterback scrambles.