49ers kicker Phil Dawson tweeted out his excitement about returning to the team. Sounds like a deal got done thankfully.

Share All sharing options for: Phil Dawson tweets he's returning to the 49ers

Fooch's Note: Matt Maiocco is reporting the deal is for two years.

Earlier this morning, Phil Dawson apparently tweeted that he was returning to the 49ers. I can't actually verify Dawson's tweet because Twitter is currently down (BITTER IRONY!!!), but I have a screenshot of Matt Maiocco's tweet, as originally posted in the comments by EastBayNinerFan:

And just now I was able to briefly get into Tweetdeck and grab this screenshot: 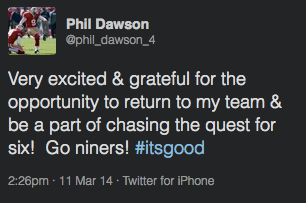 We'll hopefully find out the terms of the deal sooner rather than later. I can't imagine it's for more than a year or two, but either way, the 49ers remain solid at the kicker position. There are some kicking options in this year's draft class, but it's not quite at the level of last year.

The 49ers could have looked for an option in free agency, but I really don't think they would have found someone with Dawson's track record at what I imagine this price will be. Dawson earned $2.35 million in salary and bonuses in 2013. I could see him getting a slight raise, but again, I don't see it being drastically different.

But at least we've got some good news heading into free agency!