Choose Your Own Adventure: Jim Harbaugh

What would it be like to live the life of Jim Harbaugh? We have no idea, but this is our best guess.

Share All sharing options for: Choose Your Own Adventure: Jim Harbaugh

Editor's Note: The "Choose Your Own Adventure" book series was published in the 80s and 90s. You were able to pick and choose what to do with a character, which then sent you all around the book. We've created just such an adventure involving the always entertaining life of Jim Harbaugh. Click on the various links to make your way through a day in the life of Coach Harbaugh!

Your alarm clock is buzzing.

There's nary an ounce of daylight outside as the red, digital numbers read 4:00. This San Francisco 49ers team ain't gonna coach itself, so you'd better turn off the "24" marathon and head into the facility. Another night of no sleep, but why do you need sleep?

You can send a tweet to your fans or Prepare for a press conference. Choose your direction! 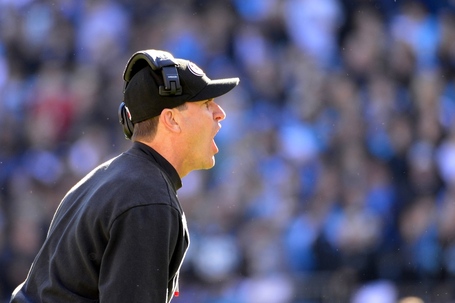 You feel dazed and light headed. You stopped using your twitter account a long time ago, but must be having some sort of strange flashbacks.

Now, it was a glorious, wonderful thing, that twitter account of yours. Many folks have fond memories of that time you promised to buy the entirety of your Stanford Cardinal team Dairy Queen banana splits if you won the Rose Bowl.

No sleep and all that Jack Bauer might have you delusional coach. Go back to bed. When you wake up, make a better choice.

You should prepare for that press conference, or you discuss roster ideas in an e-mail to GM Trent Baalke. 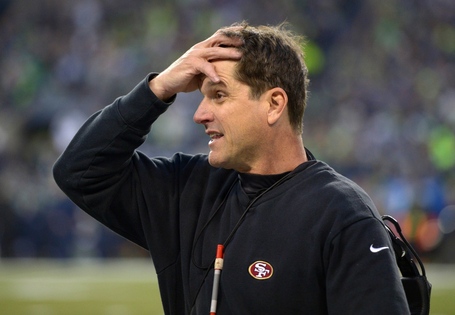 Prepare for a press conference

You've arrived at 4949 Centennial Boulevard, and you're trying to find your happy place before meeting the media. You know what's coming. Why do you wear those khakis all the time, Jim? Is Jonathan Martin going to get bullied, Coach? Have you and Trent kissed and made up yet?

You decide not to yank anymore hair out -- for now -- and sit down for a cup of coffee before heading over to the podium.

At the press conference, you're pleasantly surprised. None of those questions were asked! However, you forgot all about the Colin Kaepernick commercial questions, how much you're supposed to hate Pete Carroll and whether or not you want to discuss your potential extension. You see Kawakami trolling, and he's trolling hard.

Another fun session with the media is in the books. You've got the rest of the day to yourself. Spend some time away, coach!

Do you want to take in a basketball game or would you rather take the kids to the zoo? 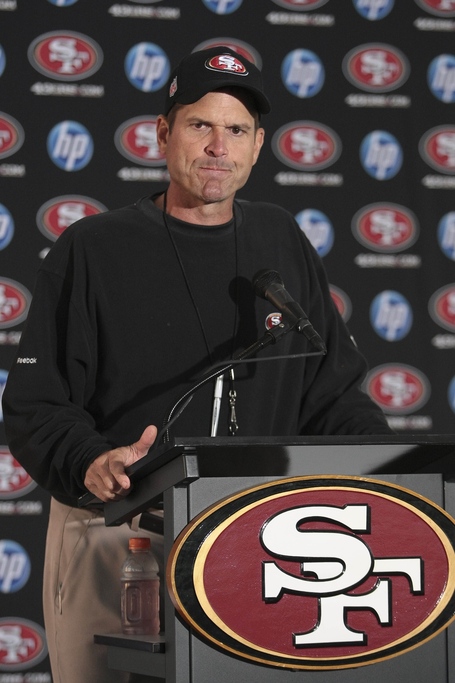 Take in a basketball game

You may not be at work right now, but you're still sporting your get-it-done attire. Be it on the field, at a press conference or while taking in some college hoops, the crew neck and khaki pants combo is a trend you're not giving up on setting.

You got lost on your way to your brother-in-law's, and ended up in Kansas. All the same. It's a game played on hardwood, but the goal is to throw an inflated object through a tight window.

You were a quarterback in the National Football League, for goodness sake. Does anyone doubt your ability to do basically the same thing in a game where no one is allowed to touch you?

Suck it, Steve Deberg. Hit me here, and I get more, completely uncontested chances.

You drained it, of course. Time to head out, though. You've got a game against the Lions to coach.

Take your kids to the zoo

Relaxing with the family is always a nice retreat. The rigors of being an NFL coach will leave one gray, and, sometimes, insane. You might a sparkly ring or two, but all that does is make you want to win more. Seeing as how you're Jim Harbaugh, that mindset is only amplified.

You get the zoo, and just as you're about to stuff your face with cotton candy, a challenge is thrown down. No, there's no football game, putting contest or paper folding match. You've proudly competed -- and won, dammit -- at all of those. This, however? Siku the walrus has challenged you to a duel, Jim. A duel in the form of pushups.

Let's see what kind of shape you're in. After showing that 1,750 pound sea creature who the stronger competitor is, you get up and dry off. Looking around, you can't find your typical getup. Your prized crew neck and pleated khakis are nowhere to be seen!

It's game day. All that other bull [site decorum] leads to this. No more media, no more distractions. Time to roll those sleeves up -- ok, you never actually do that -- put on your red pen necklace and cleats and coach this team to victory.

After four quarters of intense action, it's hard to hold back the emotions. That was one hell of a win, coach! The world knows of your competitive fire, but acts shocked whenever they see it come out.

Today could be the day that things change, though.

Would you like to excitedly greet your counterpart or leave the field humbled in success? 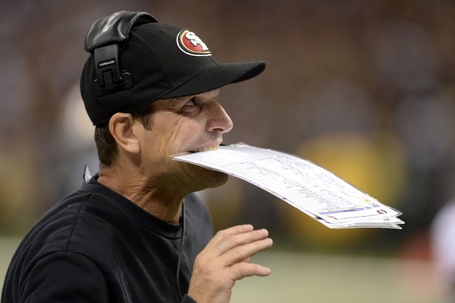 There's nothing like a little Creature viewing, which is the real reason you shop at Walmart to begin with. Today, though, you're on a strict mission to get in and get out with your new gear. No time for the dude with the mullet in the polka dot pants.

You've got your hands full of pants, socks and some undershirts -- because real men don't use baskets -- when some schmuck with a smart phone pops around the corner and snaps a picture of you.

You're cranky because that damn Walrus just put you out another eight bucks, and now this clown wants to expose your guilty pleasure on the internets?

Do you want to give him a piece of your mind, or would you rather just play it cool and pose for a pic?

@chaztopher Jim I'm Indy at Wal-Mart shopping for what else of course? Khakis! pic.twitter.com/ivj91wLFXF

Remember the heart thing, coach? You were supposed to figure out how to find your happy place and channel that anger. But, here you, freaking out over some guy taking a photo of you. I know, I know. The secret is out on your frugal shopping habits, but you're going to end up having a serious stroke, man.

You need to go spend some more time with your kids. Head over here and find that smile again.

Ripping that restrictive headset off, you toss it aside and jump with glee alongside your warriors.

Hopping, screaming and twirling, you make your way to mid-field to find that other guy. You know, the lose. The guy who didn't win.

He'll be butt-hurt about it, and people around the country who don't like you will continue to not like you, but Niners Nation will adore you!

Wait. Is it Niners Nation? Or is it Niners Empire? It's your pick, or you can just not care!

Take a picture with the guy

You aren't such a bad guy after all, it seems. What a good dude, allowing Austin to have a photo snapped with you. Of course, Glenda, the Creature who took the photo was busy looking at the sequin halter top section, and cut your head off. It's blurry, too.

It's time to get over to the stadium, coach. You need to coach that game against the Lions!

@chaztopher Me and Jim Harbaugh at Wal-Mart in Indy. Feb 2013. He found what he was looking for. pic.twitter.com/QWFdlN0huW

Spend some time with your kids

Now that you've collected yourself, have your clothes back and are ready to work again, you really should go coach that game against the Lions! 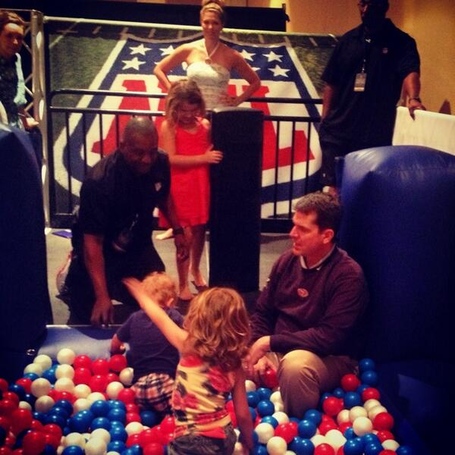 Leave the field humbly in success

Get your Hemingway-quoting self over here and celebrate for real! 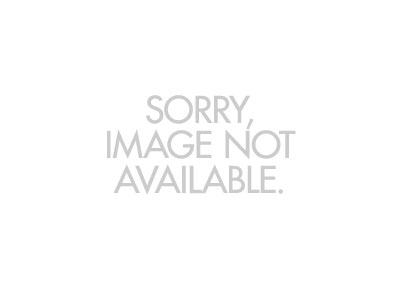 Is it Niners Nation or Niners Empire?

Trick question. Why does anyone care? Coach Harbaugh doesn't care, that's for damn sure.

You're not cut out for coaching if you care about such trivial things. Sorry, but your career is over. We're nice, though, and will let you try again. 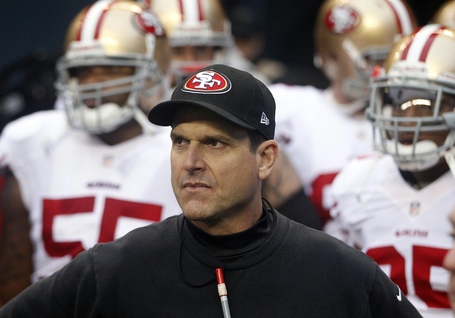 Florio, is that you? Finally, the Jim Harbaugh story ends the way you wanted it to!

Go away. Seriously. Click here and never come back. 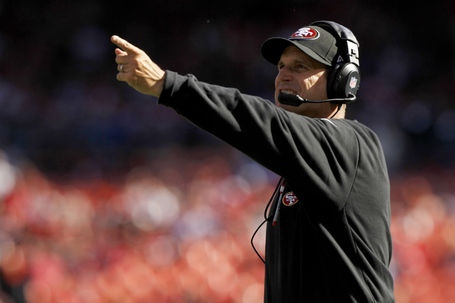 You don't like his clothes? Tough. You hate how he acts on the sidelines? Deal with it. Want to push non-existent narratives about his contract or what his players think about him? Go for it. See if he cares.

Spoiler alert, though: He doesn't. He's gonna keep on being him, because nobody's got it better. If you have a problem with that, you know exactly what you can do. 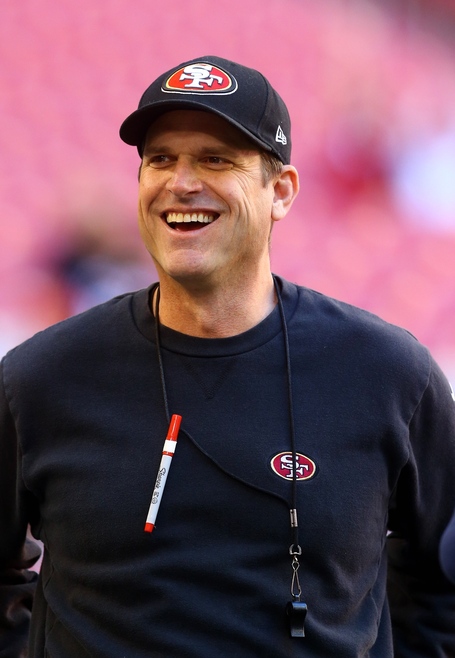