We've voted on team needs. Now it's time to start voting on players. First up, figuring out the first 25.

Share All sharing options for: Niners Nation Big Board: Ranking of needs

Last weekend, I posted a survey for everyone to rank the 49ers team needs. It's the first step toward building a big board specific to the 49ers and our community. Poldarn has done a great job developing a "consensus" big board, looking at a variety of big boards to create a proverbial "board of boards". However, his is not based on any particular team needs. Rather, it's based on ranking the players in a vacuum.

For our purposes, we are trying to rate them based on the 49ers needs, both short term and long term. In some form or fashion, you can point to some kind of need at virtually every single position. The only positions I'd see no need are punter, and maybe kicker. I say maybe kicker because the team might decide they want to find someone to try and stash on the practice squad for when they part ways with Phil Dawson.

I put together a big board voting tool (linked above, thanks to Chris Pokorny from Dawgs by Nature for putting this code together several years ago). You were able to vote on your top five positions, with the #1 position getting 5 points, and the #5 position getting 1 point. If you did not vote, you're welcome to go back in.

For now though, I don't expect drastic change. As of this screenshot, we had 2,647 votes. It's not entirely scientific, but that's a lot of votes, so I'm fine "calling the race" for now. One option would be to remove the top five, and then vote on spots 6-10, then 11-15 and so forth. If people want that, we can do it. We'll be doing that for the big board, but for this, I think I can live with this ranking.

I think one difficulty with this was the idea that the team would be looking at interior offensive line options, and might decide to get someone who can rotate between the two. To some extent, you could probably combine center and guard into one position. 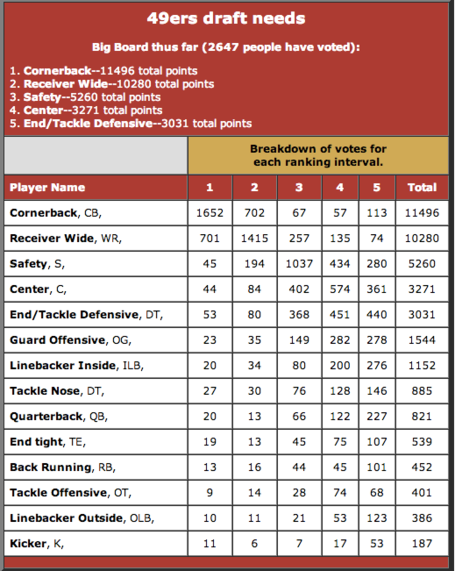 The next step will be picking 25 players from Poldarn's consensus big board to get the voting started. In voting for the players, it is not about predicting which players will be available for the 49ers to pick (whether they're at No. 30, or have traded up or down). Rather, you look at the list of players and say, if this guy is there when the 49ers pick, he is the guy they would select.

In my mind, we are creating a list of players as if the 49ers were not dependent on how other teams picked. If every single player were available to the 49ers, how would it be ordered. Since we're just getting the voting starting, I figured I'd post the 25 players I'm probably going to start with in the poll. Let me know what you think. I've included some positions that are low on the list of needs, but the players are so highly rated, it seems likely the 49ers would at least consider them if they slipped for some bizarre reason.

As always, I'm open to suggestions for a better manner of operation on this.