"We fought. We gave everything we had."

Welcome to the final edition of The Booth Review. Our beloved San Francisco 49ers fell short...yet again. However, I have finally emerged from my cave of bitter self-loathing to share some optimism with you all. Read on, Faithful.

The San Francisco 49ers cleared out their lockers, boxed up their belongings, and headed home for the offseason awhile ago. A month and two weeks to be exact. And I've only recently been able to collect myself enough to sit down in front of my computer and write something without being overcome with unfiltered rage.

Plenty has been written about an NFC Championship Game marred by controversial calls and bad feeling from both sides. The way I see it, I could waste a lot of my time adding to what is now a beaten horse, or I can keep the ill will in the rear-view mirror and focus on a future that, no doubt, looks quite bright. I've opted for more of the latter.

But I'd be remiss to not at least touch on the loss in Seattle as I've reviewed every other game this season. I'll try my very best to not dwell on for long. 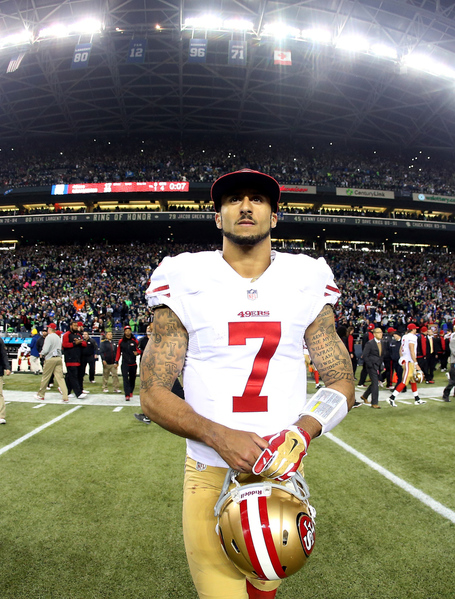 Somehow, the stench of losing in Seattle last January lingered around much longer than the previous two seasons' playoff eliminations. Yes, even more than coming five yards short in Super Bowl XLVII a year ago.

I blame the circumstances. For the San Francisco 49ers and Seattle Seahawks, the stakes could not have possibly been higher. Can you think of two teams in the league - hell, in all of sports - that share a greater mutual resentment? And with rites to the Super Bowl on the line, it meant everything for one team and nothing at all for the other.

At the expense of the Denver Broncos, Seattle would, in fact, take everything. Quite handily, from what I heard (I couldn't bring myself to watch the Super Bowl this year; a first since becoming a football fan). It made the pill that much harder to swallow knowing that San Francisco, far and away, presented a greater challenge for the eventual world champions. But don't take it from me.

"The NFC Championship was the Super Bowl," Richard Sherman told Robert Klemko of TheMMQB.com. "The 49ers were the second-best team in the NFL."

A bold statement, perhaps, but not far from the truth either.

"I turned the ball over three times. I cost us this game." - Colin Kaepernick

San Francisco kept pace with Seattle throughout the entire game. Unlike their first meeting in CenturyLink Field last September where Marshawn Lynch alone ran roughshod for three scores, the deficit never grew larger than a single touchdown. Heading into the fourth quarter, victory was still within reach, but San Francisco's last three drives ended in turnovers - one fumble and two interceptions by Colin Kaepernick - serving as the final few nails in their coffin.

Kap seemed ready and willing to absorb the blame in the postgame interview.

"I didn't play good enough to win. I turned the ball over three times. I cost us this game," Kaepernick said. "[When] you turn the ball over, you don't give your team the opportunity to score." 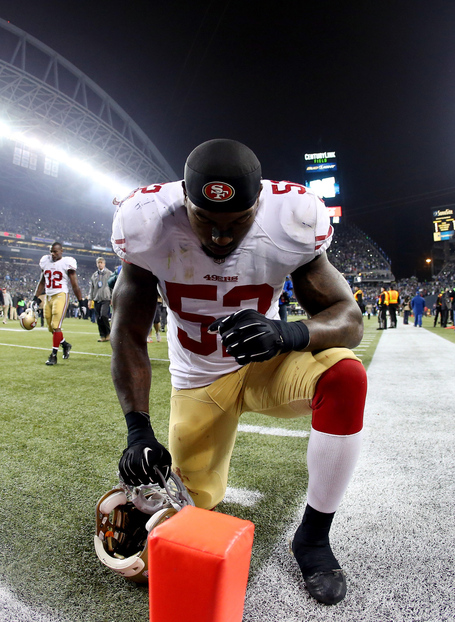 Let this be my only mention of it. I understand that referees are only human. I also acknowledge the existence of human error. I know that bad calls happen every game, and those who know me best can vouch that I'll be the last person to complain about questionable penalties and the first to move past them. But in the NFC Championship Game, there were at least a handful of calls that were simply dead wrong. So completely, transparently wrong that it turned my stomach.

I was admittedly bitter about it for several weeks thereafter, and it wasn't until I listened to Patrick Willis' postgame interview that I eased toward a resolution.

"I could sit up here and tell you what you want to hear," Willis started, "Tell you that I'm angry, that I'm mad, but I'm not going to do that. I'm going to look at you and say it was a heck of a run.

"We fought. We gave everything we had," he continued. "Even before the beginning of the season when everyone was picking us to go back to the Super Bowl . . . when we went through that little slump and everybody started writing us off, we just stayed together, and we continued to fight, and that's what we did tonight.

It's humbling, but it really is that simple, and I couldn't have said it any better.

THE RICH GET RICHER

Bill Belichick and the New England Patriots have found and sustained success for over a decade now. They're the perfect model of a team that has laid out the foundation of their roster through the NFL Draft and continue to build upon that foundation through the NFL Draft. It really is a wonder how some front offices like the Washington Redskins and Oakland Raiders still fail to realize this and continue to play with draft picks like they're penny candy, but that's neither here nor there.

Fortunately for the San Francisco 49ers, Trent Baalke seems to fall in line with Belichick's school of thought. Baalke and company came into the 2013 NFL Draft armed with 13 draft picks and ultimately came away with 11 selections. At least three became regular contributors this past season and one Eric Reid finished the year with Pro Bowl honors. 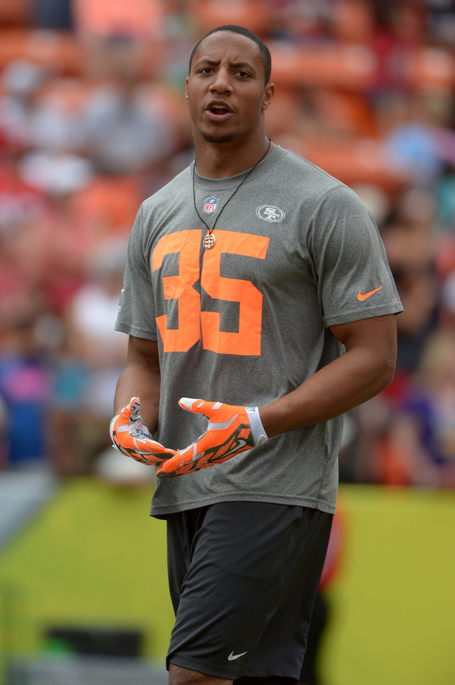 Reid really is an exemplary player in so many ways. Specific to San Francisco, he was the perfect pick for a roster already stacked with talent before his addition. And with the departure of Pro Bowl free safety Dashon Goldson, the selection filled a glaring need as well. Call it stubborn bias, but you'd have a hard time convincing me that any other player in the entire draft would have been more fruitful for the the 49ers.

"If you look at Eric, not only physically but from a performance level, consistency, intensity, his intelligence - guys like Eric are easy to figure out because they've always done it," said Matt Malaspina, the 49ers' director of college scouting.

I rarely lay this much praise upon a player just one year into his career, but the last time I felt this good about a rookie, it was a 2007 selection by the name of Patrick Willis. Only time will tell for sure, but I believe Reid will be a mainstay for this franchise for years to come.

To a lesser degree, tight end Vance McDonald, outside linebacker Corey Lemonier, and receiver Quinton Patton also contributed during the regular season. Their rookie tapes won't set the world on fire, but they all look promising nonetheless.

Then there are the rookie 'redshirts', namely Tank Carradine and Marcus Lattimore, who were drafted with 2014 and beyond in mind. Guys like Frank Gore and Justin Smith have been franchise names for the last several years, but they won't be around for much longer. You should be able to sleep a bit easier knowing that Lattimore and Carradine are waiting in the wings once the time comes.

If Trent Baalke and the San Francisco 49ers want to be like the Bill Belichick and New England Patriots of the football world, they need to continue drafting the way they have been over the last few years and keep adding franchise players like Reid.

The 2014 draft class is already being projected as one of the most talent-laden classes ever.

"I've been doing this for 30 years," said Pittsburgh Steelers general manager Kevin Colbert. "This is the deepest draft I've ever seen. We felt that way even before the underclassmen came in."

It's a good thing then that San Francisco will have at least 11 selections this year with five coming in the first three rounds. This affords them the luxury of holding steady and letting higher-round talents fall into their laps (it happens every year). On the other hand, if they're within striking distance of a player they really like, they can package a few picks together and make a play for him like they did last year with Eric Reid.

The 49ers are regarded as having the deepest, most-talented roster in the league. And with April's draft fast-approaching, the rich will only be getting richer.

The Faithful have suffered heartache for the last three years now. It hurts, I know. But I want you to start thinking about all of the years of anguish that came before this . . . the carousel of offensive coordinators . . . the Arnaz Battles and Darrell Jacksons . . . the Tim Rattays and J.T. O'Sullivans . . . Mark Roman . . . Kwame Harris . . .

Suddenly, it doesn't seem so bad, does it?

If we can endure those years, we can certainly endure these. In truth, the San Francisco 49ers will be contenders for many years to come, but you didn't need me to tell you that. We will get back to the big game in due time. Until then, let's just enjoy the ride.

As always, it's been a pleasure writing for you all. I hope you've enjoyed reading 'The Booth Review' as much as I've enjoyed writing it. I'll pop onto Niners Nation here and there throughout the offseason when I feel like I have something to say. Otherwise, you'll have to hunt me down on Twitter if you want to talk. And if you happen to be passing through Lancaster County, feel free to stop in and buy me a beer. :)