CBS Sports' Jason LaCanfora had a couple nuggets about the San Francisco 49ers today, and since I'm sure people have or will share the links, I figured I would address them. LaCanfora hits on plenty of news, but he is also wrong enough that it is always worth taking his reports with a certain grain of salt.

The first thing is an article he wrote this morning about Colin Kaepernick. LaCanfora stated that any negotiations with Colin Kaepernick would start around $20 million, not the $18 million we heard from Matt Barrows, the Boston Globe, and others.

While it would not be surprising to see Kap end up with a deal at or north of $20 million, LaCanfora's article reads straight out of the agent leak playbook. Bay Area Sports Guy put together a very solid breakdown explaining why this is likely the case. Simply put, the odds are pretty good that LaCanfora's report comes by way of Kap's agent. As BASG pointed out, there's nothing wrong with this. Kap's agent (XAM Sports) needs to get the leverage for this contract. XAM put together a solid 6-year $36 million contract for Connor Barwin, but this Kaepernick is going to blow that one out of the water. It's all in with this negotiation.

This is an interesting negotiation given that Kap's salary was previously deflate by the rookie salary cap. If he gets a deal done this offseason, he likely will be the biggest contract for the 2011 class until Cam Newton gets his next contract. Kap is a still developing quarterback with tremendous upside, but still a lot of work to do to get there. It's not like negotiating Tom Brady's last couple of deals. There is a much bigger element of risk for the 49ers, so both sides have a lot of work to do.

LaCanfora reported earlier this afternoon that the 49ers were making a push to sign Tarell Brown prior to the start of free agency. We can be at least a little skeptical, unless this information is from a different source than the one that provided the tip that Brown was close to a new deal in November.

My guess is this latest information came from Brown's agent. Major media get a lot of stuff through agent connections. Adam Schefter reportedly gets a lot of his info thanks to being represented by CAA. It's the way the business works, but we of course need to take all of this with the proverbial grain of salt. Everyone has an agenda they're trying to push, so a little skepticism can help.

It would be interesting if the 49ers did in fact get a deal done with Brown. He is not a high profile shutdown corner, but he does a lot of things well. If he ended up with a deal similar to Tramaine Brock, I wouldn't be disappointed. However, given some of the high end cornerback talent in the draft, I could see going for a cheaper option with big upside. Of course, if the 49ers can get Brown at Brock's price, former GM Bill Polian would probably be down for it. Check out the top of his free agent cornerback rankings: 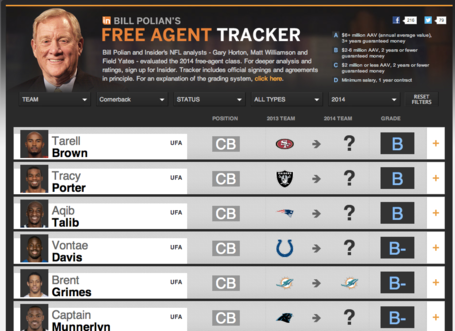