We've wrapped up voting on the safety position. Here are your 2014 Niners Nation safety rankings.

After a few days of voting, it's pretty clear how people view the top of the safety board. There are the top two, the next two, and then everybody else. I won't be doing a second vote because I think at this point, people are pretty focused on that foursome. The next few players after that are going to be options, but the 49ers would likely be inclined to wait a bit before grabbing them.

Here is how the top five shook out:

I did not include Lamarcus Joyner on the ballot, but he is a guy that many view as versatile enough to play either cornerback or safety. Mike Mayock ranked him as his No. 5 safety.

Here is how the next chunk of voting played out. You can check out the full 1-25 voting HERE. 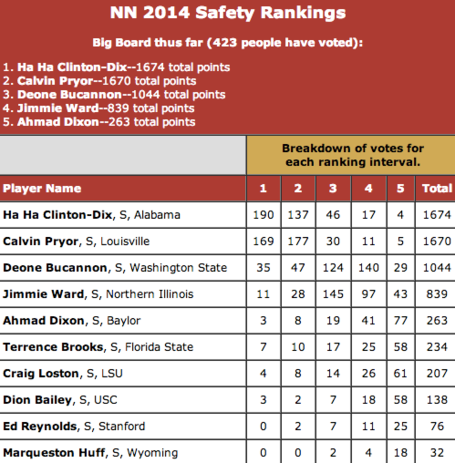 Clinton-Dix and Pryor bounced back and forth, so for our purposes, they are more or less inter-changeable. After those two plus Bucannon and Ward, we've got a small group in Dixon, Brooks and Loston, and then everybody else. I realize the 49ers very well could look at one of those guys further down, but for now I figure we'll roll with this list.

Starting tomorrow, we'll begin figuring out our overall big board. I'll sort through the first 25 players for the vote based in part on best players available, and in part based on our team needs vote. It will not be a perfect compilation of players for the poll, but it will give us somewhere to start. Ideally we'll go through 100 players, but it will depend on how active the voting is.