We've got some proof that TMZ really is full of crap in some of their reporting. Check out the photos below.

Share All sharing options for: TMZ investigation story about Colin Kaepernick in LA shows disregard for truth with dated photograph

Fooch's Update: TMZ has now admitted the photo/story was incorrect, but side-steps blame. Par for the course.

Last Thursday, TMZ reported that Colin Kaepernick was under investigation by Miami police for sexual assault. As facts and reports have come out in the subsequent days, TMZ's initial story has more or less been blown out of the water. The site has not bothered to change the headline of their story, and one has to wonder when that reaches a level of reckless disregard for the truth.

If you're looking for disregard for the truth, look no further than a Saturday article about Kap. On Saturday, TMZ wrote that Kap had traveled to Los Angeles to engage in some retail therapy, "seemingly without a care in the world." The article uses a picture of Kap showing him walking out of a sunglass store with a smile on his face.

There's only one problem, that photo is not from this past weekend.

How do we know? Well, earlier today, Central Florida running back Storm Johnson made a visit to the 49ers headquarters, and he tweeted out a picture of himself with Kap. The 49ers QB is back in town in advance of the start of the offseason workout program next week.

I've posted the two pictures side by side. Look them over, and tell me what difference you see? Mind you, the story about Kap refers to this past Saturday, and Storm Johnson picture is from today (Tuesday). That's only three days. 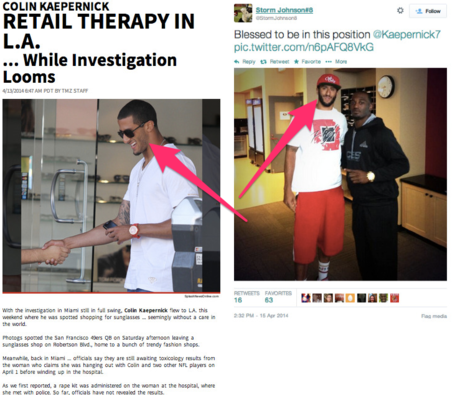 I realize that some people can grow beards in record time, but this is not such a case. I figure TMZ would not try and claim that, but rather might claim the picture is not meant to just be representative, and not actually him. Of course, considering the article is about him shopping for sun glasses, and it shows Kap walking out of a sun glass story, I'm afraid that does not pass my BS meter.

TMZ's antics should probably be ignored so we can just move on, but when there is actually proof that they really don't have much regard for the truth, it pisses me off. If you look back at the original TMZ article, they include a picture from April 3 in which Kap has the beard growing already.

As more facts come out, we will ideally reach a point where Kap can sue TMZ for defamation. The biggest hurdle is proving actual malice. This would involve either knowing something is false, or showing a reckless disregard for the truth. This might not be enough to prove "reckless" disregard for the truth, but damn if it doesn't put a point in Kap's column. Screw you, TMZ.