The San Francisco 49ers have begun installing grass in their new stadium. We check out some videos and pictures from the first day.

The San Francisco 49ers are four months away from their first preseason game at Levi's Stadium. They took another step forward on Thursday as they began installing the first bits of turf the team will play on this fall. The roll-out began Thursday morning at 5 a.m. with six truckloads of sod. Six more truckloads are being delivered Friday morning. Above you can view some video of the turf being brought in and laid out.

The 49ers and the Stadium Authority selected West Coast Turf's Bandera Bermuda for the playing field. The team and the Authority researched various forms of turf, and conducted "side-by-side simulated turf trials". They selected Bandera Bermuda for several reasons, including environmental conservation, macro/micro-climate, frequency of additional event scheduling, and player safety. Bandera Bermuda uses up to 50% less water than the average turf varieties prevalent in this market area. It holds its green color longer and has a longer growth period than any other available bermuda. Bandera Bermuda also exhibits the quickest growth regeneration in worn areas when compared to other varieties of grass.

Along with the video above, the 49ers PR department posted a variety of pictures from the roll-out of the the turf. You can view all of them at 49ers.com. Here are a few of the pictures for your viewing pleasure. After that, I've re-posted the gallery of pictures I took when I got a stadium tour a week and a half ago. You can also go to the stadium website to check out a live stream from inside the stadium. You can literally watch grass grow! 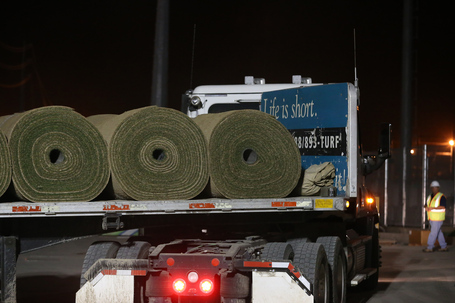 Turf lowered onto the field 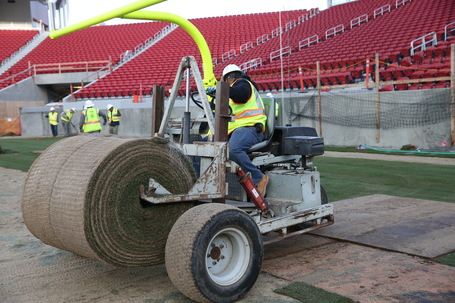 Turf being flattened down 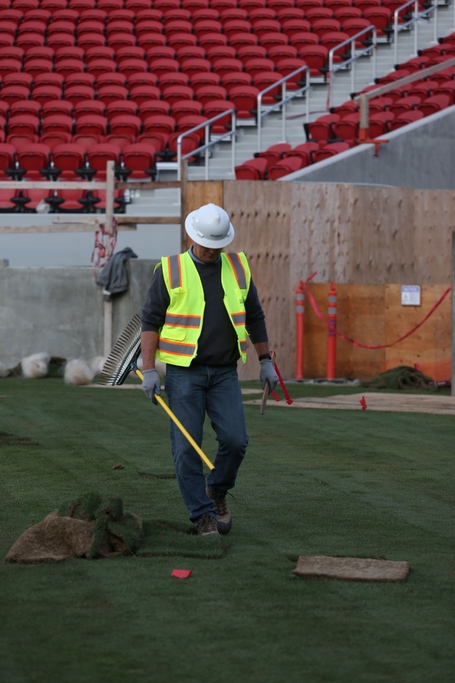 View of the back of the end zone 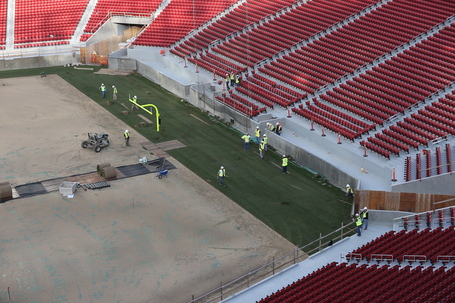 Here's the gallery of stadium shots from my visit: