2014 NFL draft position rankings: Figuring out the second half of the NN wide receiver rankings

We've voted on the Top 5 in our wide receiver rankings. Time to wrap it up with spots 6-10.

Share All sharing options for: 2014 NFL draft position rankings: Figuring out the second half of the NN wide receiver rankings

Wednesday morning, we posted a poll to start figuring out our wide receiver rankings. I wanted people to vote as if the 49ers could get any of these players. It seems obvious they would need to trade up to get a Sammy Watkins or Mike Evans, but given their draft capital, that is not a completely unrealistic scenario. I don't think they will make such a move, but because it is possible, you could make an argument that any wide receiver is available to the 49ers.

Whatever the case, even though 140 people left Sammy Watkins off their ballot entirely, having over 1,200 total ballots ensured that we would not end up with something crazy happening in the first round of balloting. Some of you may disagree with parts of this top five, but none of the five receivers is a complete shock to end up at the top.

The top 5 ended up as follows:

Here is a screenshot of the results page, providing a breakdown of the votes they each received. As expected, Watkins and Evans dominated the top two spots, and then it was a toss-up after that. I will also say that the voting broke down with Watkins and Evans at the top, then Cooks, Beckham and Lee in a bunch, then two others, then everybody else. I won't mention the two others so as to avoid influencing voting, although you can probably figure them out. 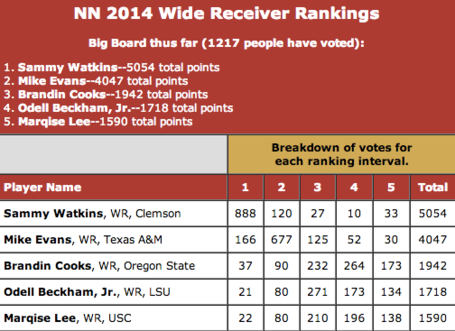 Now that we have the top five, I want to figure out spots 6-10. We could go on and on with it, but I think coming up with the clear-cut top 10 works. We'll also have at least a general idea of spots 11-15 or 20 based on the scattering of votes after that.

In voting on these players, you are factoring in how you think they fit the 49ers. And again, you're assuming they're all available to you. The player you vote No. 6 gets five points, the player vote No. 7 gets four points, and so on. If you have any questions, let me know in the comments.