After close to two days of voting, the second half of the Niners Nation wide receiver rankings is a wrap. We got a little over 1,000 votes, and I think it gives us a nice representative sample. We voted on the first five earlier in the week, and then the second five Thursday and Friday. Here is how the top ten shook out:

Here is how the voting shook out for the second five: 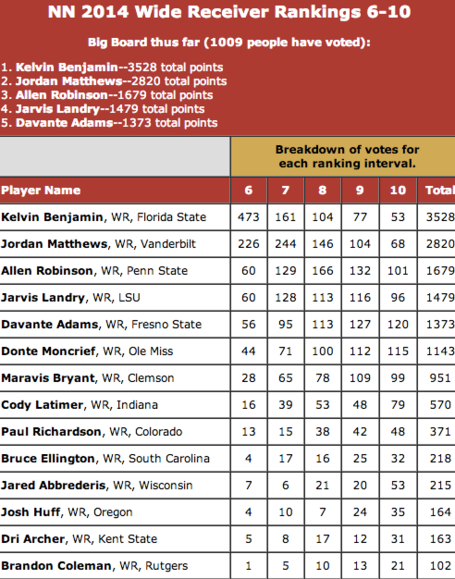 Benjamin and Matthews dominated the voting, and just so you're aware, they were in spots 6 and 7 when we voted on the first five. However, there was also a fairly clear delineation between the first five and those two, so I think it was a reasonable finish in the voting.

Tomorrow morning I'll get the voting survey open for the cornerback position. We'll do the same thing as with wide receivers, voting spots 1-5, and then 6-10. Just to remind you ahead of time, the idea is considering these guys in a vacuum. Guys like Justin Gilbert and Darqueze Dennard would require the 49ers trade up, but given the assets in their possession, that is not out of the realm of the possible.