2014 NFL draft position rankings: Figuring out the second half of the NN cornerback rankings

We've voted on the Top 5 in our cornerback rankings. Time to wrap it up with spots 6-10.

Share All sharing options for: 2014 NFL draft position rankings: Figuring out the second half of the NN cornerback rankings

Sunday morning, we began voting on the Niners Nation cornerback rankings. After two days, we've got almost 850 votes in. It's not as big as wide receivers, but it has become very clear who the top five cornerbacks are in the eyes of NN readers. As you'll see, it broke down into the top two, the next two, and then the fifth. The ones behind those five were a good ways off.

It is not at all surprising that Justin Gilbert and Darqueze Dennard dominated the top two spots. Although plenty of reasonable minds will disagree, they are still viewed by most as the top two in this class of cornerbacks. The 49ers have the draft capital to move up and get either of them, but given how deep many think this draft is, will they? If they think Jason Verrett or Bradley Roby is the guy for them, they could still move up to guarantee they get them, but they would not need to move as far up. Maybe we see another trade like last year's that netted Eric Reid; throwing in a third round pick to move up to the end of the teens.

The top 5 ended up as follows: 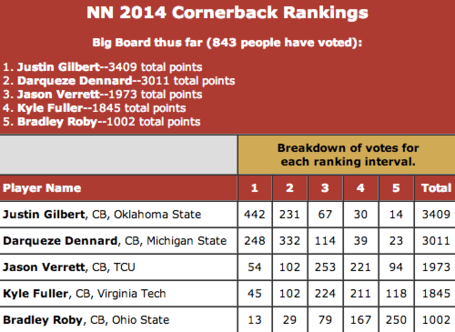 Now that we have the top five, I want to figure out spots 6-10. We could go on and on with it, but I think coming up with the clear-cut top 10 works. We'll also have at least a general idea of spots 11-15 based on the scattering of votes after that.

In voting on these players, you are factoring in how you think they fit the 49ers. And again, you're assuming they're all available to you. The player you vote No. 6 gets five points, the player vote No. 7 gets four points, and so on. If you have any questions, let me know in the comments.