We've wrapped up voting on the cornerback position. Here are your 2014 Niners Nation cornerback rankings.

After a day and a half of voting, the second half of the Niners Nation cornerbacks rankings is a wrap. Voting was a bit more limited this time, with approximately 450 votes. I think even with this cornerback class considered fairly deep, there are a lot of names people have heard, but just don't know enough about at this point. We'll continue breaking down the cornerback prospects to help with that. We voted on the first five earlier in the week, and then the second five starting yesterday. Here is how the top ten shook out:

Here is how the voting shook out for the second five: 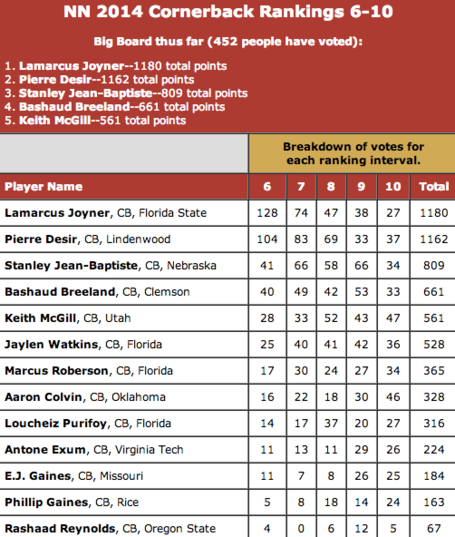 None of this is particularly surprising. The 49ers are in position to grab just about anybody they want. They could get aggressive and move up into the middle of the first round, they could sit and wait to see who slides to No. 30 and go cornerback or another position, or they could wait for No. 30 to arrive and then move down if they so choose. Even though they have several long-term needs, the team retains the flexibility to do pretty much whatever they want that week.

In the meantime, here are some cornerback scouting reports we've written up over the last couple months: