Pro Football Focus released their latest PFF 101 rankings. They included six 49ers on the list, but naturally there are some question marks.

Every year, as NFL Network is releasing their Top 100 players (as voted on by the players), Pro Football Focus releases their PFF 101. PFF has a proprietary scoring system that factors in to the rankings, but they consider other factors as well. Here is how they described it:

The list itself involved a day-long meeting among the PFF senior staff (actually multiple meetings, but the first one was a day-long affair. After having each of the staff send in their own 101 list to get the ball rolling we then went through the list and debated the merits of each person, worked on the outliers among our individual lists and slowly honed in on a consensus.

We didn’t just use stats or even raw grading (though they obviously formed the spine of the process), but we were prepared to move players around according to the various factors that PFF grading doesn’t try to take account of – how hard was a player’s role? What was his supporting cast like? Did the scheme benefit him or hurt?

Any list is going to have a certain amount of subjectiveness to it. While we know the NFL Network vote is entirely subjective, the PFF 101 includes plenty of subjective assessments. The description details one way, but even their grading system requires some subjectivity. It does not mean their rankings are not valuable, but they do remain subject to critiques and questions.

The PFF 101 included six members of the 2013 San Francisco 49ers. This was tied with the Eagles and Chiefs for third behind the Denver Broncos, who had seven players on the list, and the Seattle Seahawks who had eight players. Here are the 49ers players:

PFF ranked Kap No. 16 among quarterbacks that played at least 50 percent of their team's snaps. Among those that played at least 75 percent, he ranks No. 14, so he was a ways away from getting into their top 101. His ranking took a hit because of three straight performances from Weeks 2 through 4 that they graded negatively: 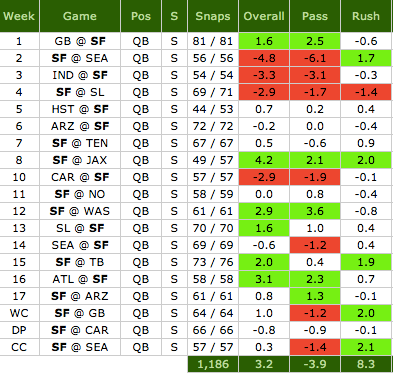 I get poor grading on the Seahawks and Colts games, but I'm a little surprised by the grading out of the Rams game. He did not put up monster numbers, but he was efficient in completing 15 of 23 passes for 167 yards and two touchdowns. He did lose one fumble, so I can see the negative running grade. Does anybody recall many passes that were lucky not to be intercepted? Or anything else that may justify a negative grade on that game?