Carlos Hyde in his 49ers uniform at the NFLPA Rookie Premiere

49ers rookie Carlos Hyde made an appearance at the NFLPA Rookie Premiere event. This resulted in some pictures of him in his uniform with pads.

Share All sharing options for: Carlos Hyde in his 49ers uniform at the NFLPA Rookie Premiere

Yesterday afternoon, I posted a FanShot of 49ers running back Carlos Hyde sporting his uniform at the 2014 NFLPA Rookie Premiere event. Our photo tool has a few more pictures in hand, so I thought I'd post them in here for your viewing pleasure. This is not the first time we've seen Hyde in uniform. After the rookie minicamp, we had one picture of him doing some exercises.

The first picture was a Tweet from SB Nation's Dan Rubenstein. He got a shot of Hyde walking off the field at the LA Coliseum with Johnny Manziel: 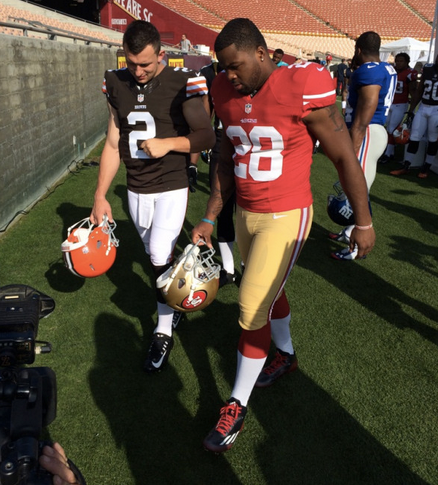 The NFLPA Rookie Premiere runs separate from the normal rookie orientation program. While the rookie orientation program is more about making sure players know to keep on the straight and narrow, the Rookie Premiere event is a bit more of a networking and promotional event. The players do photo shoots for football cards, and create additional promotional material for the NFLPA. It takes place in LA, with the photo shoot taking place at the Los Angeles Coliseum.

Here are a couple pictures of Hyde at the event. The second picture also includes Jadeveon Clowney and Tre Mason. These two pictures come courtesy of Gary A. Vasquez, of USA Today Sports. 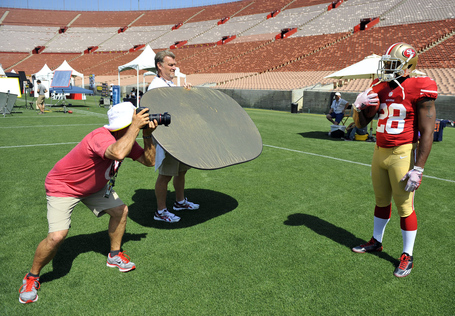 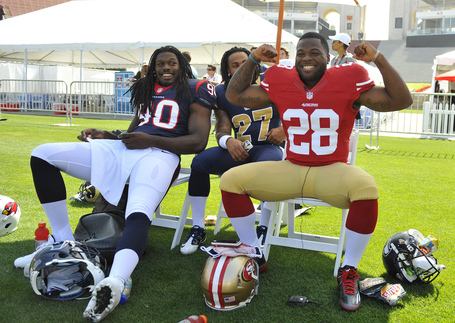