Levi's Stadium FAQ: What do you want to know about the San Francisco 49ers new stadium?

Share All sharing options for: Levi's Stadium FAQ: What do you want to know about the San Francisco 49ers new stadium?

The San Francisco 49ers move into Levi's Stadium later this summer, and at that point they'll be off to the races. The new stadium is based in Santa Clara next to the team's facility, and across from Great America theme park. The official address of the stadium is 4900 Marie P. DeBartolo Way, while the team's practice facility is located on 4949 Marie P. DeBartolo Way.

How close are the two facilities? Well, I took this picture from the front door of the 49ers practice facility: 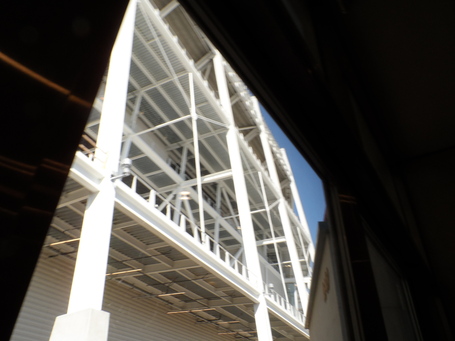 Any time a team moves into a new stadium, there is a lot of information that needs to be processed for fans going to the games. For the 49ers new stadium, moving it down to Santa Clara adds even more to that. It's not like they moved across the street from Candlestick, or even in the same city! Whether you're a fan of the move to Santa Clara or not, the team is down there now, and adjustments needs to be made.

I've been putting together bits of content here and there about the 49ers new stadium. The most recent was a look at hotels and public transportation options. I want to put together a story stream featuring all sorts of helpful pieces of information about anything from public transit to tailgating options to things about what to do inside the stadium (food and whatnot).

With that in mind, I wanted to open a thread for people to offer up suggestions on things they would like to know. The plan is to create the story stream and then pin it into the river of content on the front page. That way it will be there for people to find whenever they are interested. A lot of people on NN will not be going to Levi's Stadium on a regular basis, or even more than once or twice in their life. But when some of you do go to the stadium, this will hopefully be a helpful tool for your visit!