Fans saw a spike in production with Michael Crabtree with Colin Kaepernick. We look at why extending Michael Crabtree is beneficial to the San Francisco 49ers and examine why the 49ers are the most attractive team to Crabtree.

Share All sharing options for: The Crabtree-Kaepernick connection makes a Michael Crabtree extension that much more important

With the offseason in full effect and very little happening in 49ers world, I wanted to put down some thoughts regarding Colin Kaepernick and Michael Crabtree. With Kaepernick's new contract and the latest reports of Richard Sherman's post super bowl comments, it seemed like a good time to explore some of the stats they have together and explore some of the elements in a possible Crabtree contract negotiation.

"It's how they go out, how they play, the energy on the football field. If they are making plays, Crabtree is always talking noise at the defender or something like that. You can see the swagger; you can see the confidence."

Nobody can deny how comfortable Crabtree and Kaepernick are with each other on the field. Crabtree was a different receiver with Kaepernick at the helm, you could see the semblance of his Texas Tech days.

In 2012, PFF's Top 10-graded wide receivers included the likes of Andre Johnson and Calvin Johnson. But up there at No. 7? Ahead of A.J. Green and Brandon Marshall, was Crabtree. I guess this is why Sherman's rants come across to me as gimmicky and do not bother me much. Simply put, Crabtree is easily a top 10 receiver when healthy.

Some of my work here at Niners Nation delves in the medical side of players and their recoveries. As I have stated previously, before Crabtree even stepped on the field, I believed he had the ability to make a full come back. Even though the 49ers decided to ease Crabtree back, his 2013 debut against St. Louis Rams was very exciting. Crabtree, who had been out since May with a ruptured Achilles, caught two passes for 68 yards as the 49ers won 23-13. He was able to show his reliability, right from the start.

I have high expectations for Crabtree for next season, because I do not believe he was 100 percent in 2013.  For starters, he was not cleared to practice until November 5 and did not practice every day leading up to his debut. Even though there was no sign of a setback, Crabtree listened to his body and allowed it to adequate rest in between workouts. But, once Crabtree's Achilles reaches maximum medical improvement, I believe his tendon will heal beautifully -- perhaps stronger than before. And, that is certainly within the medical boundaries. 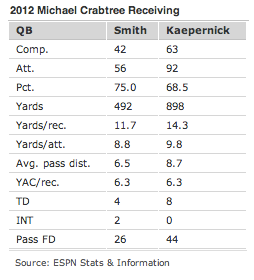 From the chart, you can see Crabtree's production spiked with Kaepernick. He was targeted more and was given countless opportunities. But, the increased production for Crabtree was about more than additional opportunities. It was about Kaepernick and Crabtree maximizing them. You could say Kaepernick unleashed Crabtree. If he were to go to another team, I am not convinced Crabtree would have the same production. Therefore, unless he is offered a multi-year guaranteed deal on another, Crabtree may not be willing to risk the return of pre-Kaepernick numbers. Crabtree is a better player with Kaepernick.

At the same time, Crabtree offers Kap a certain amount of comfort as well. When Kap signed his new deal last month, the rumblings were he agreed to a team friendly contract to allow enough room to sign more players, like Crabtree. And, considering the chemistry, Kap may realize his numbers improve with Crabtree on the field.

Jeff Deeney at Pro Football Focus was kind enough to pass on some advanced stats to me. PFF's stats confirmed part of my theory. Although Kap makes Crabtree a better receiver, it is also true Kap was better with Crabtree.

Stats are not everything. When used well, however, data and statistics can add shades of gray to a black and white landscape. They reveal additional, sometimes unseen information. In this case, it gives evidence of what we already know: Crabtree is Kap's favorite target. And, if Kap created room for the 49ers to sign more players, it is reasonable to say Crabtree also realizes his productivity is better with Kaepernick. I mean, with three seasons with Alex Smith, he was pretty unspectacular.

The general belief is Crabtree is looking for more money. Given he is the 49ers quarterback's favorite target, he has leverage to ask for as much as he deems reasonable. Yet, he must consider the possibility of a drop in production without Kap. While he certainly has value, the 49ers have the trump card in Kap.

It will be interesting to see how the 49ers and Crabtree counterbalance the possibility of this next contract. While there are some mitigating factors, the 2014 season will show what these two players can do together. We have not yet seen the two together from the beginning and end of an entire season. I am confident both Crabtree and the 49ers see a new deal as mutually beneficial.

Author's Credit: Thanks to Pro Football Focus Analyst, Jeff Deeney for the advanced stats. You can follow him on twitter @PFF_Jeff.