The San Francisco 49ers have made a change on their practice jersey sponsorship. After five years with VISA, the 49ers now bear a sponsorship patch from SAP.

The San Francisco 49ers are back at training camp, and the move into Levi's Stadium has led to one small change most probably will not notice. If you look above on the top left side of Colin Kaepernick's jersey, you'll see a little patch that says SAP. They are a Founding Partner for Levi's Stadium, and their sponsorship includes practice related activation. The practice facility is now called the SAP Performance Facility, and as we see above, SAP gets some sponsorship on practice jerseys.

This is not the first time the 49ers have had a sponsor on their practice jerseys. Prior to this offseason, VISA was the official sponsor of the practice jerseys, dating back to 2009. This picture below is from a press conference during the week of practice leading up to the NFC Championship Game this past January. It appears the SAP patch started with the offseason workout program. 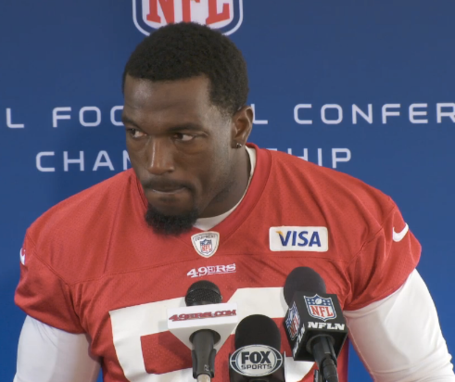 Jersey sponsorships are a huge deal in sports focused outside the United States. Soccer in particular does a lot with jersey sponsorships. For example, Manchester United has a deal with General Motors to have Chevrolet splashed across their uniforms.

The big four sports leagues have dipped their toes into the uniform sponsorship market. The NFL has allowed sponsorship of practice jerseys since 2009. MLB has included sponsorship patches on game jerseys when they have had their season-opening series in Tokyo, but have not extended them beyond that.

When people mention the idea of jersey sponsorships, one complaint is that it will lead down a slippery slope to the point where it becomes like NASCAR, with sponsors covering the entire race uniform. I'm not overly concerned about that, as we've seen international leagues maintain a certain level of decorum with the addition of uniform sponsorships.

That does not mean I actually want to see it happen on regular season jerseys. Of course, couldn't we also argue that Nike is paying for what is effectively a uniform sponsorship? I realize they are in the sporting goods and apparel industry already, but I don't know that it is all that much different than slapping a Chevrolet logo, or any other logo somewhere on the jersey. The Chevrolet logo on the Manchester United kits is a bit more prominent than the Nike logo on NFL uniforms, but it's still there to some extent.

The NFL is always looking for ways to pad the bottom line, and jersey sponsorships would certainly do that. Horizon Media put together a study on what these kinds of deals could fetch. They had the Dallas Cowboys, New England Patriots, and New York Giants at the top of the heap, potentially fetching $14 million a year on such a sponsorship. The 49ers would likely come in under that, but given their Bay Area location, and the quality of the product on the field, I have to think they'd be in line for a good sized chunk of money.

Anybody out there overly offended by the notion of jersey sponsorships? If you think the owners make more than enough money, that's fine, but in terms of the actual aesthetic nature of it, does it bother you much?