The Booth Review - 49ers vs. Bears

“I think we’re all going to look at this one and feel like we have fingerprints on it.” – Jim Harbaugh

The San Francisco 49ers dropped their home opener, 28-20, to the Chicago Bears in heartbreaking fashion. What did we learn? Read on, Faithful.

It's difficult to categorize the San Francisco 49ers home opener as anything other than a colossal disappointment.

Sunday night represented new beginnings for a team that came just short of their second Super Bowl berth in two years.  It was a golden opportunity for San Francisco, white-hot with momentum after thrashing the Dallas Cowboys in Week 1, to show the world that they could do it again, on their terms, in their house -- or to be more precise, their brand new, $1.3 billion, state-of-the-art mansion.

To that last point, for as much as Sunday night signified a fresh start, it also represented culmination.

When [Jed York] declared, with rare resolve, his dream of moving the Bay Area's most beloved team into a new home, many sneered.

Jed York was just 27 years old when he was officially named Team President and Owner of the San Francisco 49ers back in 2008. York, baby-faced and bright-eyed, was a stark contrast to the silver hair (if any hair at all) and wrinkles you would expect from an owner of a professional sports franchise.  For that reason alone, it was easy to be skeptical of the young man.  But when he declared, with rare resolve, his dream of moving the Bay Area's most beloved team into a new home, many sneered.

Officially, the 49ers and the city of San Francisco pored over plans for a new stadium since 1977 -- before York was even born -- but unsurprisingly, any progress at all was stymied by countless bureaucratic hurdles.  York navigated the organization through some of its darkest years and reinvigorated it while simultaneously spearheading a stadium construction effort that many said would be forever fruitless.

Levi's Stadium arrives to us now 37 years later, and for that, among other reasons, he deserves our sincerest thanks. So it's unfortunate that, on this night -- one meant for pageantry and celebration -- the 49ers could not return the favor. 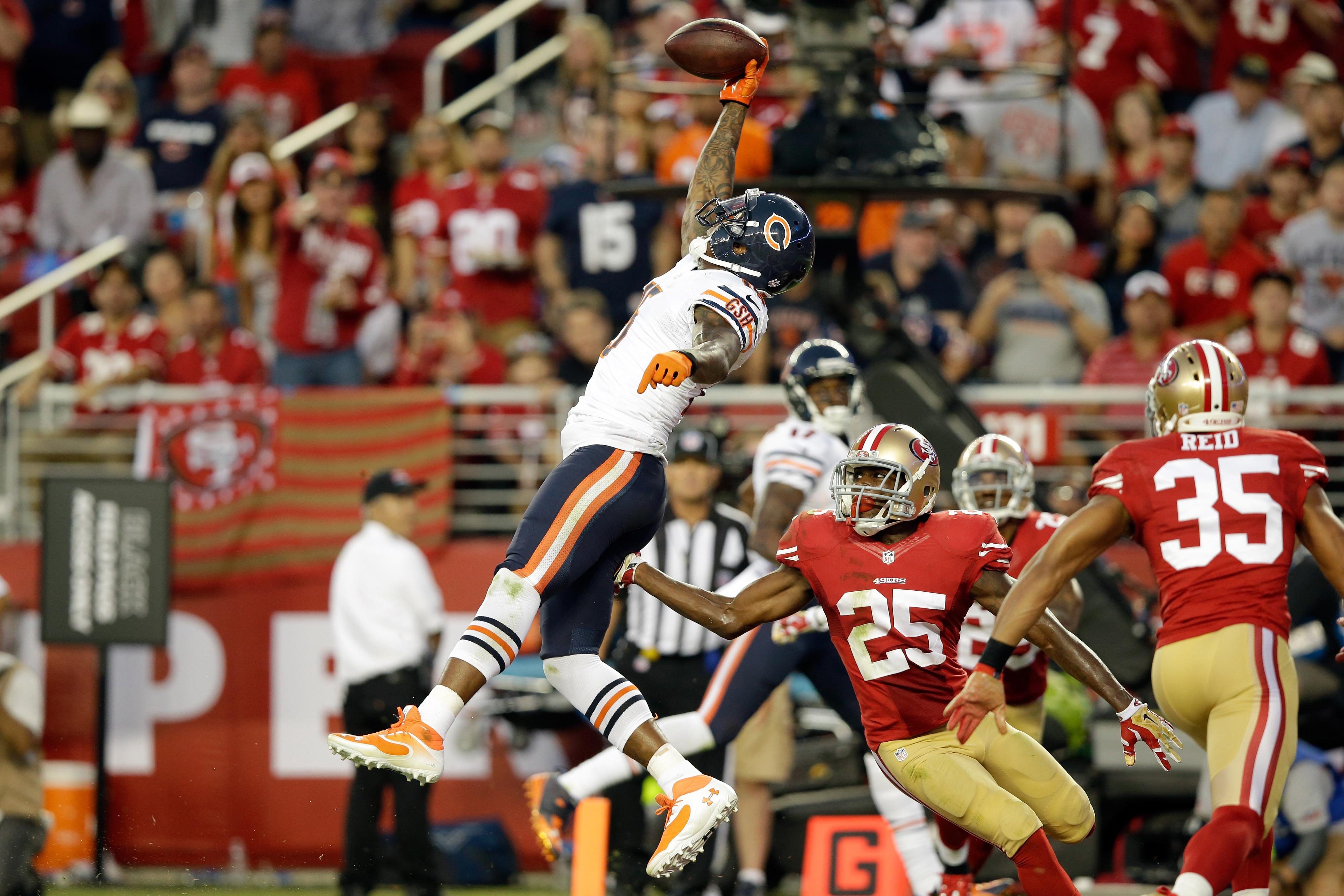 We have the long arms of Aaron Lynch to thank for setting up Levi's Stadium's first touchdown.  After the Bears went three-and-out on the opening drive, Lynch stretched out a hand to graze the punt, deflecting the ball out of bounds and giving San Francisco their first possession at the 8-yard line.  Three plays later, it was birthday boy Michael Crabtree who came down with the ball and rolled onto his back into the endzone.  Frank Gore and Phil Dawson also contributed to the 17-0 lead as the second quarter came to a close.

And for a second there, we were briefly reminded of last week's blowout in Dallas and wondered if we were being treated to another. I know you had your legs kicked up, ready to coast along to a 2-0 record -- we're all guilty of it.

But Jay Cutler and Brandon Marshall were about to crash the party.

Truly, the turning point of the night came just a minute left before the half when Quinton Dial broke through the line and drove the crown of his helmet into Cutler's chest.  This drew a roughing the passer penalty which brought the Chicago offense to San Francisco's 25.

On 3rd-and-2, Brandon Marshall runs a fly route from the slot with rookie Jimmie Ward in coverage as the nickel.

Let's take a second to break down the measurables here.  Marshall stands at 6-foot-4 and 230 pounds; that's about as big as receivers will get in the NFL.  As a reference point, Anquan Boldin is 6-foot-1 and 220 pounds.  Ward measures in at 5-foot-10 and 193 pounds which is about as small as defensive backs go.  Who would you put your money on in a jump-ball situation?

Ward never stood a chance.  Matter of fact, he had about as good of a chance as I do covering Shaq.

The Bears clearly identified this as a favorable match-up since Cutler connected with Marshall, one-on-one against Ward, twice more for touchdowns. So why didn't the coaching staff adjust? Why not put a bigger body like Chris Cook, 6-foot-2 and 212 pounds, against Marshall instead? Why not double-up and send another man?

First of all, we shouldn't fault Ward for maintaining his assignment, or, in other words, doing his job. Hell, how many NFL cornerbacks can successfully cover Marshall one-on-one? Ward did about as much as he could save for growing eight inches taller.

I suspect this was simply stubbornness on behalf of the coaches to deviate from the game plan. And in the end, it bit them in the ass, three times.

Before the season started, many projected San Francisco's offensive line to be one of the team's strengths, but we can see now that it's clearly their biggest weakness.

All-Pro left guard Mike Iupati just hasn't been the same.  We've seen him struggle all the way through preseason up until this point.  The only logical conclusion is that he hasn't properly recovered from the broken fibula sustained during the NFC Championship Game back in January.

When mobile quarterbacks like Kap get happy feet in the pocket, any proper technique and footwork are thrown out the window.

Right tackle Anthony Davis was held out of action once again due to a hamstring injury, and Jonathan Martin received a second consecutive start in his stead.  You know, I can actually remember, quite vividly, a point during the game when I thought to myself, Man, maybe I was a little too harsh on Jonathan Martin. He's actually playing pretty well.

Then in the fourth quarter, as if the football gods meant to spite me, Martin reverts back to revolving door status.  He surrendered two sacks on a crucial must-score drive at the end of the game.

Right guard Alex Boone is only now getting re-acclimated to live action since he was an offseason holdout. Center Daniel Kilgore and left tackle Joe Staley have been the team's most consistent linemen, but neither are absolved of guilt.

Colin Kaepernick was sacked four times and pressured several more.  When mobile quarterbacks like Kap get happy feet in the pocket, any proper technique and footwork are thrown out the window.

In the fourth quarter, Staley gave up too much ground against Jared Allen and spurred Kaepernick to run up-field and force an awkward throw across his body to Crabtree.  Kyle Fuller came down with it.

I feel like I need to get this off my chest, but I'll try to be as brief as possible.

Football is such a huge part of my life, and I can't really remember a time when it wasn't.  I watch it, study it, read and write about it because I love it.  But this has honestly been the closest I've come to considering a break from it all.

In light of the Adrian Peterson and Ray Rice domestic abuse cases, with particular emphasis on the latter, and the complete failure by the league's highest powers in handling said situations, these have truly been the darkest days in the league's history.  But there has been plenty of discourse on that subject, so I'll leave it at that.

However, in a matter that does relate directly to Sunday night's game -- penalties.

As Fooch pointed out earlier in the week, there were 26 total penalties for a combined 176 yards between both teams on Sunday night which does not even include all of the flags that were picked up or declined.

As far as I know, this is a new NFL record (There were some irregularities between the sources I looked at).

It was like the football game stopped being, you know, a game of football and turned into a flag-throwing competition instead.  The pace was completely disrupted and devolved into a crawl at times.

Late in the third, San Francisco led Chicago 20-7. The Bears offense, starting on their own 20-yard line, went a quick three-and-out before a flag was thrown. Corey Lemonier is charged for illegal use of hands and the Bears get a new set of downs.  The 49ers manage to force yet another three-and-out before, you guessed it, another flag flies into the frame. This time, Dontae Johnson gets called for illegal contact.  Another fresh set for the Bears.

Chicago scored later that drive to cut the lead to a single possession.

The NFL is currently a broken product. It's borderline unwatchable.

It was right around this point of the game that I started to feel like cheering for my favorite team, somewhat of a basic tenet of sports in general, was a practice in futility. Why should I get excited for a positive play when I know that an inevitable yellow flag will erase it from being? And from there, I wondered why I should watch at all.

When will Roger Goodell realize that over-officiating is demarginalizing the importance of defense, and thus, choking the life out of professional football?

It's bad enough that I feel like I am now compromising my morals every time I sit down and watch an NFL broadcast, but apparently, I can't even enjoy the game on a superficial level.  There's no way around it: the NFL is currently a broken product. It's borderline unwatchable, and there's no clear resolution in sight.  If it wasn't for my emotional connection to this team and my desire to see them succeed, I would have jumped ship a long time ago to, I don't know, water polo or something.

With that said, I'm not sure what football's future holds, but for now, I'll grit my teeth and forge forward to the Arizona Cardinals.  That's what being 'Faithful' is all about, right?