Some years ago when I was a younger, less pompous man, I spent a perfect August afternoon slaving away in the Niners Nation search function, in my never-ending search for Rec's, to compile a list of NN inside-jokes. My self-important arrogance and desire for moar Rec's has driven me to present to you.... Volume 2. If you haven't read the first one (it's the link above, "NN inside-jokes" just incase, you know, computers aren't your thing), it's really worth a read just to catch up. Also, to not waste your time in the comments section asking about KSWOF, I am so freakin' serious right now. To wrap up this cheesy intro, I won't be touching "Rabble rabble rabble", because COME ON MAN DO YOU REALLY NEED SOMEONE TO TELL YOU WHAT IT MEANS? Anyway.

In 2008, looong before I was registered here, Glorious Leader decreed that never more shall we be potty-mouths in non-game day threads. Interestingly enough, Fooch's rules were brought into play after, what I may only assume was an unusually salty, gameday thread for a Cowboys game. Looking through said gameday thread, I'm not really seeing anything terribly flagrant, in fact, there are less f-bombs and s-bombs than a normal set of gameday threads these days.

Either way, it has given rise to a unique Niners Nation habit, which is to blank our foul language with [site decorum] tags, because, you know... using symbols to smudge the word is also against the rules. I always chuckle just a little bit, to this day, whenever visitors, unaware of the significance, say something like, "What the fuck is [site decorum]" (Sorry Fooch don't warn me please).

The initial roll-out of the site decorum rules can be found here.

On August 30th, 2012, one of our fallen comrades expatriots started a new trend that lasted through the January 2014 NFCCG. He would begin the first game threads with the image shown below, and for every PAT made throughout the game, he would post a growing menagerie of Pat's, quite literally - pictures of Pat Riley, Pat Benatar, Pat Willis, etc. For the two years in which this happened, it was a weekly thing and was always enjoyed. 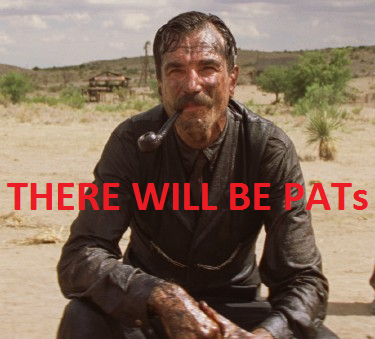 The initial posting can be found here and the last one can be found here. Afterwards the dude jumped ship to go be a Chiefs fan. He wrote an enormous fanpost for NN detailing why he was breaking up with the 49ers in a legendary "It's not you, it's me" thread, which generated over a thousand comments in no time. He eventually deleted it, and I can't find any traces of it's history... But it happened I swear.

The new thread joke has been around for as long as I can remember, even though it's not exactly prevalent. At the end of a quarter game thread, Fooch always blasts the comment section with all bold all caps all red links to the next quarter's game thread, with the subject line generally reading "NEW THREAD" and some value of exclamation points at the end, with the link posted 3 times underneath. As a fledgling NNer, I saw some jokey-jokemaker make the titular joke, and it has been an absolute favorite of mine ever since.

Generally, I wait until the end of the first quarter thread for the first game of the season, and work my hardest to time it so I can post it before Fooch gets his off. It'll be the exact same format, except embedded in the fake link (essentially swapping out "second" for "first" in the x-quarter-game-thread) is actually a live link to an Amazon or eBay page selling... you guessed it... actual thread.

I've successfully pulled this off a maximum of twice a year, with generous spacing (3+ months) between each strike. The reactions are usually priceless, I've been called names and flagged for trolling. I scored big on the first one of 2014. Always worth a laugh, and I nearly excluded it in this post because I'd hate for it to get played out. So don't do it.

In the 2013 offseason, we had a user name MEANDMYMULE49, a user whose heart was in the right place but who had the football IQ of a cinder block. His comments, no matter the article or thread topic, was always about drafting a tall, fast wide receiver who could "run the hill" with Jerry Rice. Now, we at NN are an accepting group, if not overly-accepting at times, but this guy just wouldn't quit derailing threads with his insistence on a HWS (height-weight-speed) receiver.

Finally one day, one of our users had enough and wrote:

MULE talks about 2 things and two things only, it doesn’t matter what the article is about. All he says is "We need an 8 foot 15 receiver who runs a 3.9 second 100 yard dash and runs the hill with GOAT". Literally, not metaphorically or with hyperbole, all of his posts are that.

This outburst spawned several months worth of 8'15" receiver jokes, usually used to squash threads whenever MULE came by. He got aggravated enough eventually to lash out against the "Internet High Five Crew", whose purpose was to agree with each other and slap high fives while "trolling" him. Unfortunately, he eventually deactivated his account here and hasn't been heard from since.

The purpose of this next section is to pay tribute to the quirks of some of our long-standing members, three in particular.

The first, and least active these days, was Edggy. While some of you might know him for "jerking it to AleX", he had an unusual typing style which included gratuitous use of punctuation and spacing. His catchphrase was no less strange, although I could never quite decipher his criteria for using it.

This was used in arguments, as personal defense, as an exclamation of surprise, and of being indignant. I still see it used mockingly from time to time, as a sort of ghost of Edggy past.

The second one I'd like to discuss was that Shorts menace. Good lord, the simplicity of it drove me (and many others) bonkers - whenever anyone said "Short" or "Shorts", he was there to respond with "DID SOMEONE SAY SHORTS?!", it was like he ctrl-f'd every thread just to get on folks' nerves. He eventually sort of gave it up, but looking back, it was surely memorable.

Lastly, the man, the myth, the legend - BigMar. Between such classics as "Weeeeeeez" and "Inquiring minds want to know", along with a distinct inability to converse OR use the reply function, BigMar has cemented his infamy in Niners Nation lore with his proclaimed love of the sack. Yes, folks, the sack. His catchphrase around these parts has always been 'Who loves da sack baby", which eventually found it's way as an award given in the weekly prediction contest here, but it's roots are squarely found in BigMar's insistence that football is all about Pass Rushers. 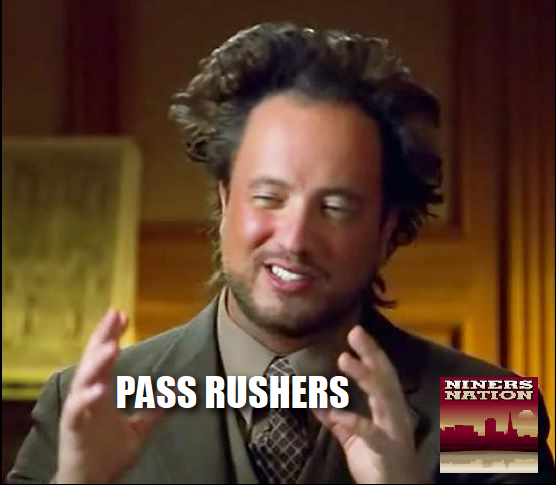 Like any good fanbase, the community here at NN has taken a real shine to our GM and Head Coach, Trent Baalke and Jim Harbaugh respectively. Through the years, little interview snippets, habits, and even completely fictional traits have been passed around here in honor of the men leading our team. The two such that have been bestowed upon GM Trent Baalke have been the recurring jokes of "Moar 7ths!" and "Draft Ninja", in reference to Trent Baalke's habit to seemingly always acquire 7th round draft picks in trades. Furthermore, the "Draft Ninja" moniker is due to his ability to make often unbelievably beneficial trades, even more so on draft days (the 4th round trade up-trade down to acquire Stevie Johnson for ultimately dropping just a few draft spots comes to mind), has been forever immortalized in the following: 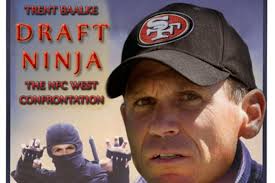 As for Harbaugh, an offhand snippet from an interview in which he claims that his detractors, or Jive Turkeys, will continue "Gobbling". A ludicrous statement obviously, the line has taken on a life of its own within the comments section of Niners Nation articles and is commonly used to reference the media, opposing fans, and even pessimistic NNers to this very day.

In the annals of Internet Culture as a whole, there have often been meta-jokes that play upon themselves. The one that comes to mind is the veritable koan, "Milhouse is not a meme is a meme" - which I will gladly explain to you now that it is about 20 years old. In the early days of internet forums, the concept of a "forced meme" was embodied by a lovable character known as Milhouse. No matter how hard some tried, it was always declared that Milhouse was not a meme. Over time, however, it "Milhouse is not a meme" became one, which has often been stated is the key to understanding the internet.

At NN, we had something similar happen organically, centered around the concept of "the sarcasm font". For those unfamiliar, the sarcasm font is made by surrounding the sarcastic text with @'s. It creates a font that is different than the norm, and is used to help folks out because, truly, sarcasm doesn't translate well via text. However, several such retorts have grown from this, mostly sarcastic in nature. Some folks will earnestly ask if a poster "forgot the sarcasm font", while others eventually came to use that statement in a sarcastic manner, which is pretty hilarious in itself in the eyes of this humble author. However, some will attempt to use the sarcasm font in subject lines, which does not work, at all. Of course, this led to the usage of "sarcasm font doesn't work in the subject line" as a way to tell people that their ideas and comments are ludicrous and of no value.

Author's note: You're welcome for this section, by the way.

This section is the one that I'm the least confident on, but only because it's based off an innocuous typo from this last offseason - it doesn't exactly hold the title for most original joke, but the response to it was so overwhelming, and I personally loved it.

Anyway, during an article about the 49ers getting the home Thanksgiving game against the Seahawks, one new poster showed his pure enthusiasm in true SHEETS form, but gave us this little gem.

SEAHAWKS AT NINERS THANKSGIVING ONLY MEANS SEAHAWKS AT AT NINERS CHAMPIONSHIP ALSO MEANS 3-0 VS HAWKS AND A SUPERBOWL BACK WHERE IT BELONGS. THE LAMBROTY TROPHY SHOULD BE CALLED THE BILL WALSH TROPHY

The replies were all equally ostentatious (read: ALL CAPS) and complete with, ahem, quite emotive punctuation and what seems to be moaning of some sort. As the offseason went on, the joke was referred to time to time and was usually met with positive responses. With that in mind, it was moderately successful, and I personally hope this joke doesn't die any time soon.

A bunch of whack-jobs on NN (myself included, Mr. Secretary of Offense) who believe Quinton Patton will be the second coming of the GOAT because we are the General's Battlewagon, and we can do whatever we want!

Led by ak4niner, there have been weekly meetings of the battlewagon each during each week of the season, and particular preseason games, since he was drafted. There is plenty of room on the Battlewagon, and we're always looking for new recruits. Just hop on to the next meeting (found in Fanposts) and pledge your undying and/or fanatical support. This first meeting can be found here. 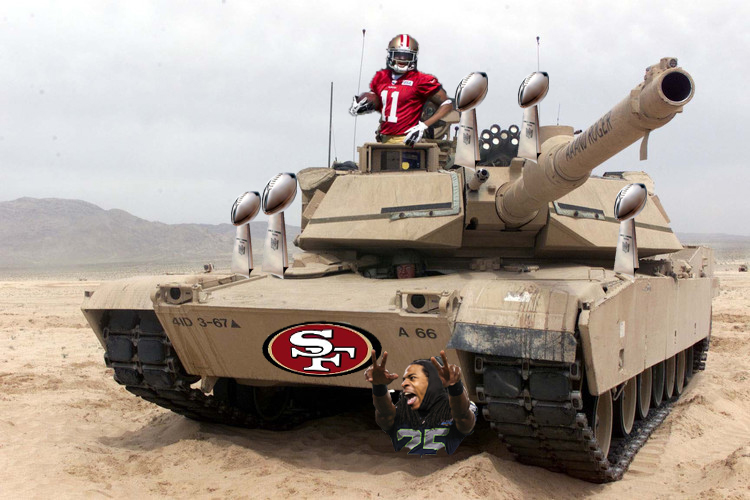 If I missed any, don't worry I'll probably do another one in another year or two.