The Booth Review - 49ers vs. Eagles

"We’ve just got to go out there and fight for each other and do whatever it takes." - Frank Gore

The San Francisco 49ers handed the Philadelphia Eagles their first defeat of the season and improve their own record to 2-2. So...why does it feel like we lost? Read on, Faithful.

We are in the midst of, perhaps, the most volatile period in Jim Harbaugh's tenure in San Francisco.

Yes, the 49ers faltered out of the gate with a 1-2 record, just as they did in 2013 before rebounding straight to the NFC Championship Game.  But this time around, the context is much more dramatic, and even dangerous, bonded to football perils some 2,300 miles away in Ann Arbor.

As Brady Hoke is coaching for his life - his Wolverines were embarrassed by rival Minnesota this past weekend in ‘The Big House' - sports media zealously reclaim an old narrative:

Could Jim Harbaugh leave for Michigan? Is the locker room losing faith?

"They want him out," Deion Sanders said on the NFL Network. "They're not on the same page. I really want to know if they're really playing for the head coach. Are you really down with your head coach, San Francisco 49ers? Because the way it looks and what I'm hearing, you're really not down for your head coach. And that's a problem."

And to think, these comments came after a win.  Had the Eagles scored on that final drive to take the game, the vitriol would have been nuclear.

Harbaugh was rather blunt in addressing the rumors during his Monday afternoon press conference.

"Personally, I think that's a bunch of crap," he said. "If I had a good story to tell, I'd want to put my name to it. So, I don't put a lot of credibility into the unnamed source."

"I haven't seen Trent or Deion around much," Harbaugh quipped.

Perhaps proving more substantial, even players have been quick to snuff out the flames.

"Last I checked, I was in the locker room and it was all smiles, and everybody was happy," Boone told 95.7's Damon Bruce. "Nobody was saying we want him out. I know for a fact everybody loves Harbaugh.

"Guys are slouching around and it's toxic? Those are words that should never be used," Boone continued. "Here's my problem with all this: if you're not in our locker room, then keep the 49ers name out of your mouth, because you have no idea what goes on in our locker room."

Do we believe Harbaugh and Boone? Do we believe Sanders and Dilfer? Truthfully, it doesn't really matter what we choose to believe. Because whether we like it or not, the narrative will cling to San Francisco like an albatross for the rest of the season. And moving forward, any single loss takes on the gravity of three, and the noose can only get tighter.

Some misfortune from the last two weeks seemed to have spilled over into the first half of the game on Sunday.

On San Francisco's opening drive, Vernon Davis balked for a false start penalty on third down to back the 49ers up to their own 14-yard line.  Then, miscommunication on the line led to a jailbreak of Eagles linebackers.

Connor Barwin managed to slip past right guard Alex Boone and Frank Gore (who is typically as dependable a blocker as a running back can be) to create the initial pressure while Trent Cole beat center Daniel Kilgore to finish the job and force a punt.

The heels of long-snapper Kyle Nelson were mere inches away from the endzone line... Andy Lee never stood a chance.

The heels of long-snapper Kyle Nelson were mere inches away from the endzone line; at the snap, Dan Skuta was bull-rushed by two defenders.  Andy Lee never stood a chance.  Skuta backed up right into Lee who flopped onto the ground along with the ball.  Brad Smith fell on top of it to put Philadelphia up, 7-0.

Then in the second quarter, Colin Kaepernick had the 49ers offense at midfield.  Anquan Boldin and Brandon Lloyd were paired together on the right side of the formation, Boldin in the slot.  Both wideouts ran inside slant routes with Eagles safety Malcolm Jenkins covering Boldin.  Kaepernick expected Jenkins to keep with Boldin, but instead, Jenkins peeled off.  Kap delivered the goods right into the arms of Jenkins whereupon it was returned 53 yards for a touchdown.

Three minutes and 13 seconds later, another special teams blunder.  Jitterbug Darren Sproles made an 82-yard bee line along the right sideline for a punt return touchdown.

After surrendering two special teams touchdowns and a pick-six, San Francisco fell behind, 21-10. 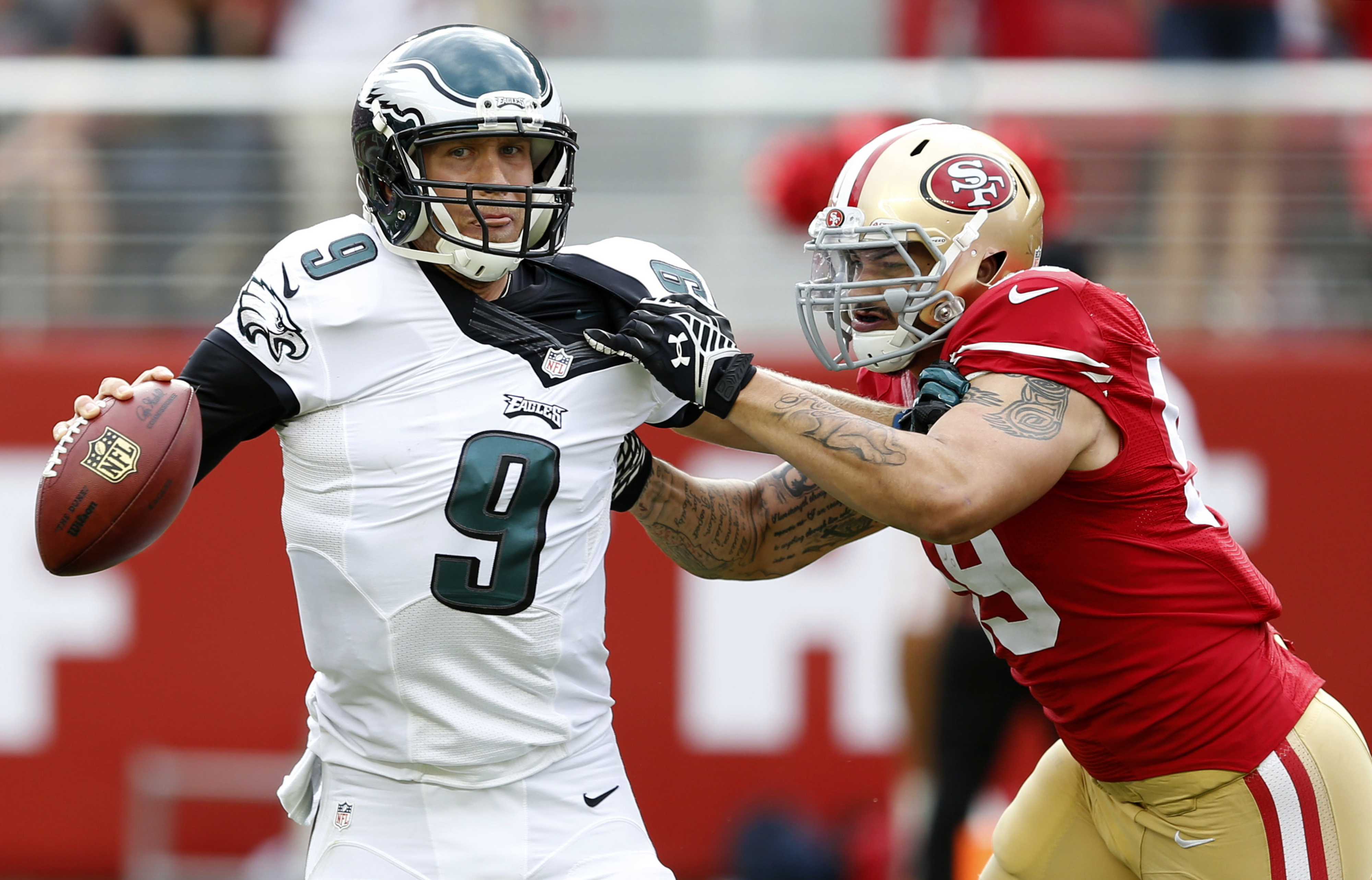 Heading into Sunday's match, the "Gang Green" offense was white-hot, averaging 326 yards through the air and 109 on the ground.

Philadelphia's final stat-line on offense?  Nick Foles passed for 195 yards, no touchdowns, and two interceptions, earning him the second-worst passer rating of his career (42.3).

LeSean McCoy, who won the league's rushing title last season, was held to a paltry 17 yards on 10 carries.  His counterpart, Sproles, fared no better (aside from the lone punt return score) with 6 net offensive yards on three touches.

The defensive unit, as a whole, deserves a lot of credit, but I think Perrish Cox and Antoine Bethea deserve special recognition.

The defensive unit, as a whole, deserves a lot of credit for clamping down on Chip Kelly's lightning-efficient offense, but I think defensive backs Perrish Cox and Antoine Bethea deserve special recognition.  The two were buzzing all over the ball on Sunday.

After Week 1's victory in Dallas, defensive coordinator Vic Fangio, who is apparently something of a golf enthusiast, said of Cox, "He's our utility wood in our golf bag.  We can use him for a lot of different shots."

Against the Eagles, Cox worked much of the game against breakout receiver Jeremy Maclin and was able to hold his own. On one particular throw early in the second quarter, Cox was able to keep pace with Maclin (who ran a Combine 40 at 4.35 seconds) deep downfield to force an incompletion.

Back to McCoy, who is arguably the Eagles' most dangerous offensive weapon - he was rendered completely ineffective mostly due to outstanding defensive play in space by guys like Bethea.

In the first quarter, McCoy made a catch on a swing pass to the right. Bethea, who was about 12 yards away from McCoy when he made the reception, tracked the running back the entire way and dropped him behind the line of scrimmage.

And finally - my personal favorite defensive play of the day - on Philadelphia's first drive of the second half, Foles made a short completion to tight end Zach Ertz. Bethea got his hands on him first. With his right arm around Ertz's waist, his left hand tugged against Ertz's carrying arm to jar the ball loose right into the arms of...who else?...Perrish Cox.

Upon suffering their second consecutive loss in Arizona last week, Frank Gore was the very picture of dejection.  After Sunday, I can assure you, he was all smiles.

Michael Silver, of NFL.com, tells a great story about his run-in with Gore in the locker room after the game.

"That’s a guy we have to stick with. He’s Frank Gore. He’s a guy you want to see with the ball in his hands."- Anquan Boldin

"Mike, tell the world I can still play," Gore said to Silver. "That's what I'm out to show everyone. I've been through so much – two ACLs, two shoulders, a hip injury that could have ended my career…

"Every year, it seems like they've drafted a back. And yet, I'm still here, and there's a reason the man upstairs got me to this place."

After toting the ball just six times for 10 yards against Arizona, Gore lit up the Eagles defense with 24 carries for 119 yards, including a ridiculous, completely improvised 55-yard catch-and-run for a touchdown.

"That was huge," Carlos Hyde said, after the game.  "I call Frank my big brother, so when I see him out there getting explosive runs, then I get excited and I want to get a piece of that."

Throughout the preceding week, many feared that offensive coordinator Greg Roman had pulled the plug on the running game for good, but, at least for now, it appears to be reenergized.

"I think we did a nice job, especially getting the running game going," Boldin said.  "Going back to Frank, that's a guy we have to stick with. He's Frank Gore. He's a guy you want to see with the ball in his hands."

And not for selfish reasons, to be clear. Not for stats.  Not for personal glory.

"That was a great job by Frank," Kap said, sharing the podium with Gore during their post-game interview.  But the 31-year-old veteran was quick to deflect credit.

"Great job by Kap," Gore said. "Like I said, I'm a football player. I just want to play football. Like I tell my coach, when I'm in the game, I'm going to do whatever it takes to help my team get a victory."