The Booth Review - 49ers vs. Cowboys

"The only thing that matters is what we do today. Let’s show them who the 49ers are." - Patrick Willis

Football is finally back and so is The Booth Review! The San Francisco 49ers opened the season with a convincing 28-17 victory over the Dallas Cowboys. What did we learn? Read on, Faithful.

That was the official ‘hashtag' used to promote the San Francisco 49ers season opener against the Dallas Cowboys, and for good reason.

Through the ‘90s alone, both franchises clashed during the regular season six times -- with San Francisco taking four -- and met in the NFC Championship Game three times -- with Dallas advancing twice.  Each of those conference title games produced a Super Bowl champion.

The NFL just isn't the same without that big blue star pissing everyone else off.

But since those bygone years of grainy antenna-clad television sets, what once was the league's fiercest rivalry briefly fell asunder.  The turn of the century saw both franchises backslide into a dark age of really bad football before being cleansed by fire and reemerging once more.

These days, it's fashionable to prophesy San Francisco as the next landing spot for the Lombardi trophy while I doubt anyone can say the same of Dallas and keep a straight face.  It seems the Cowboys have hit the proverbial wall having achieved no better than an 8-8 record in each of the last four seasons.

Meanwhile, everyone in Jerry World is left in a perpetual state of contemplation: Is this finally the year that the Cowboys put the pieces together? Are we even getting close?

Laugh it up -- but for the sake of keeping with tradition, I really hope they are close.  Because the NFL just isn't the same without that big blue star pissing everyone else off.

DeMarco Murray carried the ball on the second play of the Cowboys' opening drive. Tight end James Hanna had motioned to the left directly in front of linebacker Dan Skuta, and the two engaged immediately after the snap.

As the run developed to the left, Skuta was not only able to maintain leverage against Hanna, he was able to locate Murray, grab his carrying hand, and unfurl his fingers to peel the ball loose onto the ground.

Chris Culliver, who scooped it up and ran it back for a score, was front and center on Sportscenter's highlights -- and to his credit, he did react very quickly -- but the play would not have happened at all had it not been for Skuta's impressive handiwork.

"It's something we work on a lot. We take pride in it," Skuta said. "Obviously, today, the turnovers showed up."

The three-time Pro Bowl quarterback was picked off three times throughout the day.

The first occurred on the Cowboys' third offensive drive when Romo threw to Dez Bryant in triple coverage.  Safety Antoine Bethea was behind Bryant, and linebacker Michael Wilhoite dropped back to assist.  But it was a side-pedaling Eric Reid who swooped in for the grab and dashed in and out of traffic, carrying the ball 48 yards to the 2-yard line.

"It was just one of those things where you just couldn't believe that he actually threw it." - Patrick Willis

The second came near the start of the second quarter after the Cowboys drove 75 yards to the San Francisco-5.  Rookie linebacker Aaron Lynch, a hulking man-child at 6-foot-5 and 279 pounds, was bearing down on Romo who forced the ball into a crowded endzone.

"I just happened to look to my left...I saw Romo looking in that direction," Willis said. "And I don't know if he saw me or not. I really don't care. I got that ball, and it was just one of those things where you just couldn't believe that he actually threw it."

Well, believe it, because he threw another one on the very next drive.

Romo heaved it some 50 yards downfield, once again, to Bryant.  Unfortunately, his intended receiver was snugly sandwiched between two red jerseys -- Eric Reid and Perrish Cox -- who kept in stride with Bryant the entire way.  Cox made the easy interception.

History has shown that the teams with the largest turnover differentials by season's end are typically still playing come January.  In 2011, the 49ers led the rest of the league by a considerable margin -- a differential of +28 -- and they advanced to the postseason for the first time in nine years.

That number dropped to +9 and +12 in the '12 and '13 seasons, respectively.  But through Week 1, San Francisco currently leads the league with +4. Let's hope they keep their foot on the pedal. 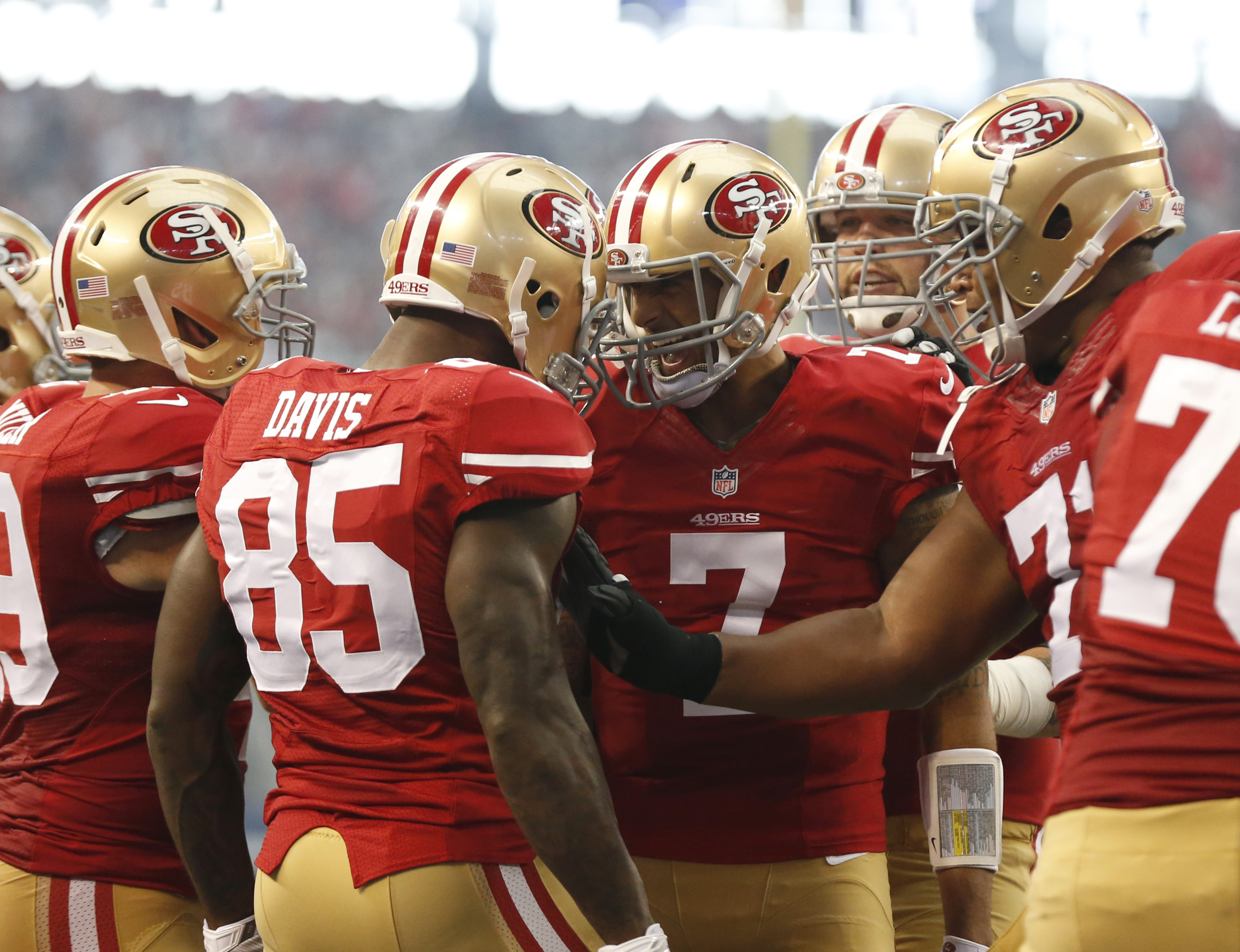 Colin Kaepernick and Vernon Davis might be the two most freakish athletes on the entire roster, on either side of the ball.  So it should come as a surprise to absolutely no one that, when one connects with the other, magic happens.

Last year, Davis posted the second-best season totals of his career with 52 receptions for 850 yards and 13 touchdowns -- far and away the best receiving numbers on the team and the best in the league among all non-albino tight ends.  Those 13 touchdowns, by the way, accounted for 62-percent of the team's total receiving touchdowns.  The next best was Anquan Boldin with seven.

This year, the duo got off to a fast start by scoring a pair of touchdowns within the first 11 minutes of the game.

In 2013, Vernon Davis' 13 touchdowns accounted for 62-percent of the team's total receiving touchdowns. The next best was Anquan Boldin with seven.

Defensive end Jeremy Mincey got around left tackle Joe Staley and made a diving grab for Kaepernick, making just enough contact with his right ankle to trip up the quarterback.  Kap recovered, taking three quick steps before firing to Davis who made a bobbling catch for the score.

As a brief aside, Davis has this terrible habit of jumping into the air when he doesn't need to.  Not only does it just look downright silly sometimes, but in instances such as this one, it affects him on a functional level since it adds an unnecessary extra step.  I really don't think he would have had any trouble making the catch in stride had he just kept running.  But I digress.

The second connection came after Reid's interception to start the San Francisco offense at the 2-yard line, and that one was just too easy.  Play-action, Davis wide-open in the right corner of the endzone...21-3, 49ers.

And I'd be remiss to not mention what is, in my mind, the biggest takeaway from the entire game: Kap looked remarkably more confident and decisive, didn't he?

Fans seem to forget that last year was his first full season as the starting quarterback. At times, he looked slow and fidgety. He seemed unsure of himself and constantly second-guessing. And for all of these things, his completion percentage and passer rating suffered.

What we saw on Sunday was something closer to his 2012 campaign when he was unexpectedly thrust into the starting lineup (so unexpectedly, in fact, that he didn't have time to second-guess and overthink). On Sunday, Kap navigated the pocket with a James Dean-coolness and was razor-sharp through his progressions.

The coaching staff had a few extra days to prepare the offense (since the final preseason game was on a Thursday), so it will be interesting to see if Kap can keep it up the rest of the season. Remember that the passing game also got off to a hot start last year against the Green Bay Packers before leveling out in a bad way.

San Francisco is often regarded as having the deepest roster in all of the NFL.  Well, that depth was tested early after the secondary lost both starting cornerbacks to injury.  Tramaine Brock was carted off the field halfway through the first quarter with a sprained right toe, and later in the quarter, Chris Culliver exited the game having suffered a concussion.

Perrish Cox came in to replace Brock while rookie Dontae Johnson, selected in the fourth round in May, took over for Culliver.  Both replacements did very well against a Dallas passing attack that -- as detailed earlier -- is not afraid to take shots deep.

Johnson, in particular, had two outstanding pass defenses.  At the top of the third quarter, he was covering Terrance Williams on a comeback route.  Johnson read it perfectly.  Once the route was diagnosed, he redirected his attention back to Romo to track the ball through the air.  Williams would have made the catch and had complete control of the ball, but Johnson swatted it out from behind.

It was an impressive debut for a rookie considering he entered the game as the team's fifth or sixth cornerback...

In the fourth, again, in coverage against Williams, Johnson kept pace for about 40 yards along the left sideline, playing the inside track on a fly route.  Had he just been a single step ahead, it would have been an easy pick.  But a successful pass deflection did just fine in helping to force a punt.

All in all, it was an impressive debut for a rookie considering he entered the game as the team's fifth or sixth cornerback before circumstances forced him into covering the Cowboys' second-best receiver.

On the other side of the ball, we got our first glimpse of rookie running back Carlos Hyde in a non-exhibition game. Sure, there's the red zone touchdown carry late in the first half, but everyone expected that. The most intriguing way Hyde was utilized happened in the fourth quarter when San Francisco had a 28-10 lead with 9:52 left in the game. The only sensible thing to do was to run out the clock.

We see offenses switch three or four running backs in and out of the stable all the time, but rarely do we see two backs being used in this manner and, more importantly, to this effect. San Francisco did little to hide their intentions of running the ball yet, even against a stacked box, they were able to execute the game-plan. That is impressive.

Gore and Hyde aren't really ‘smash and dash' and not quite ‘thunder and lightning' either, but rather a hammer and...a bigger hammer?

It's OK -- we've got the rest of the year to brainstorm.