There are always many pieces that have to come together for a successful play. When quarterback drops back to pass, looking for open receiver, it helps if potential target has the ability to separate himself from defenders. Back in 2012, when asked about why he frequently targeted Michael Crabtree, Colin Kaepernick had this to say:

Receivers being able to get open is important, but not the only piece of the puzzle. During last couple of seasons, a lot has been said about how coaching staff tried to make Kaepernick's decisions easier, dialing in designed rollouts and attacking defenses using certain formations, shifts and motions in the backfield, all with the idea to confuse the opposition and help Kaepernick decide where to go with the ball. But when things didn't go as planned and when Kap's first option was taken away, that's where the 49ers' signal-called found himself in trouble, often times forced to scramble and make throws on the move.

Those out of pocket attempts while running away from the pressure are always dangerous and very difficult throws to make, even for a player like Kaepernick who is considered to be one of the most athletic quarterbacks in the NFL. We've seen him attempt many exceptionally difficult throws, which did not always end with the fortunate result. Just as we've seen a fair amount of make-able passes left on the field because of his poor decisions.

I wasn't going to question Kaepernick's ability to read the opposing defenses or decision-making capability, instead, what I've tried to do is to put a degree of difficulty on passes he actually attempted during 2014 regular season. I wanted to keep things as simple as possible with as much objectivity as possible. With the exception of intentional throwaways, I put an easy, moderate and difficult grade on each pass attempt based on three selected factors:

Sometimes, defining if quarterback is under pressure or not can be tricky and subjective, but when I chart Kaepernick's drop-backs I try to follow this definition:

In 2014, Kaepernick was pressured on 34.8 percent of his drop-backs. For the purpose of putting degree of difficulty on Kaepernick's throws, we'll be only looking at pressure on pass attempts, ignoring throwaways, scrambles and sacks. With that adjustment, the pressure rate drops to 21.4 percent.

Length of a pass

I marked each pass attempt as short, intermediate or deep. Short passes are the ones that traveled less than 16 yards, measured from the spot of a throw to targeted receiver, intermediate the ones between 16 and 30 yards, and deep throws - passes longer than 30 yards. Average Kaepernick's pass traveled 22 yards with 20.0 percent of the total marked as deep balls. In case of deflected or passes batted down at the line of scrimmage, the measured distance was from the spot of the throw to the location of targeted receiver.

Short passes to wide open receivers facing no pressure are easy to complete contrary to deep passes thrown under pressure into tight windows. Here's how I defined all possible combinations of the three preferred factors with the corresponding degree of difficulty - DOD. 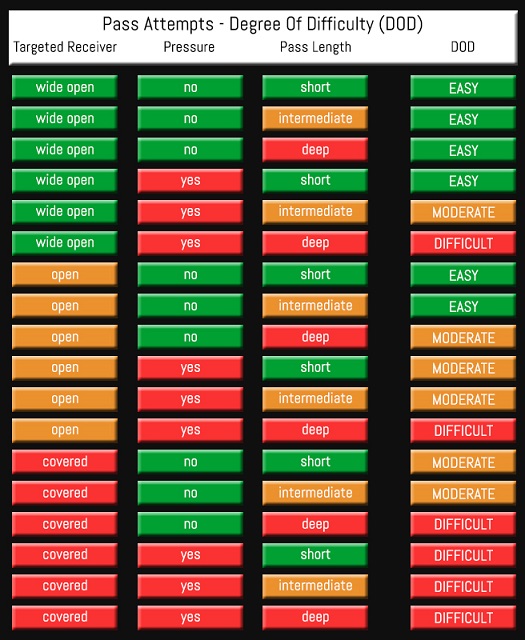 More than half of the pass attempts, 54.2 percent to be exact, were labeled as easy throws, 24.4 percent as moderate and 21.4 percent as difficult throws.

In this post, I'll present the data in greater detail for a couple of most extreme examples from 2014 regular season - Week 1 game at Dallas and Week 13 game versus Seattle. First one is a combination of low pressure rate and high average of distance between targeted receiver and nearest defender which allowed Kap to attempt a lot of easy throws. The second extreme example is combination of relatively high pressure rate and tight coverage, with average distance well below season average. Seattle's high ranked pass defense forced Kaepernick to throw a lot more passes into tight windows.

To lead the way we'll look at graphical presentation of one of the considered measures - distance between nearest defender and targeted receiver at time of throw for each of the two mentioned games. But before we do that, a few notes to go along with the charts:

First, Week 1 chart with the locations of nearest defender relative to targeted receiver for each of Kap's 23 pass attempts, except for the one play which ended with intentional throwaway. 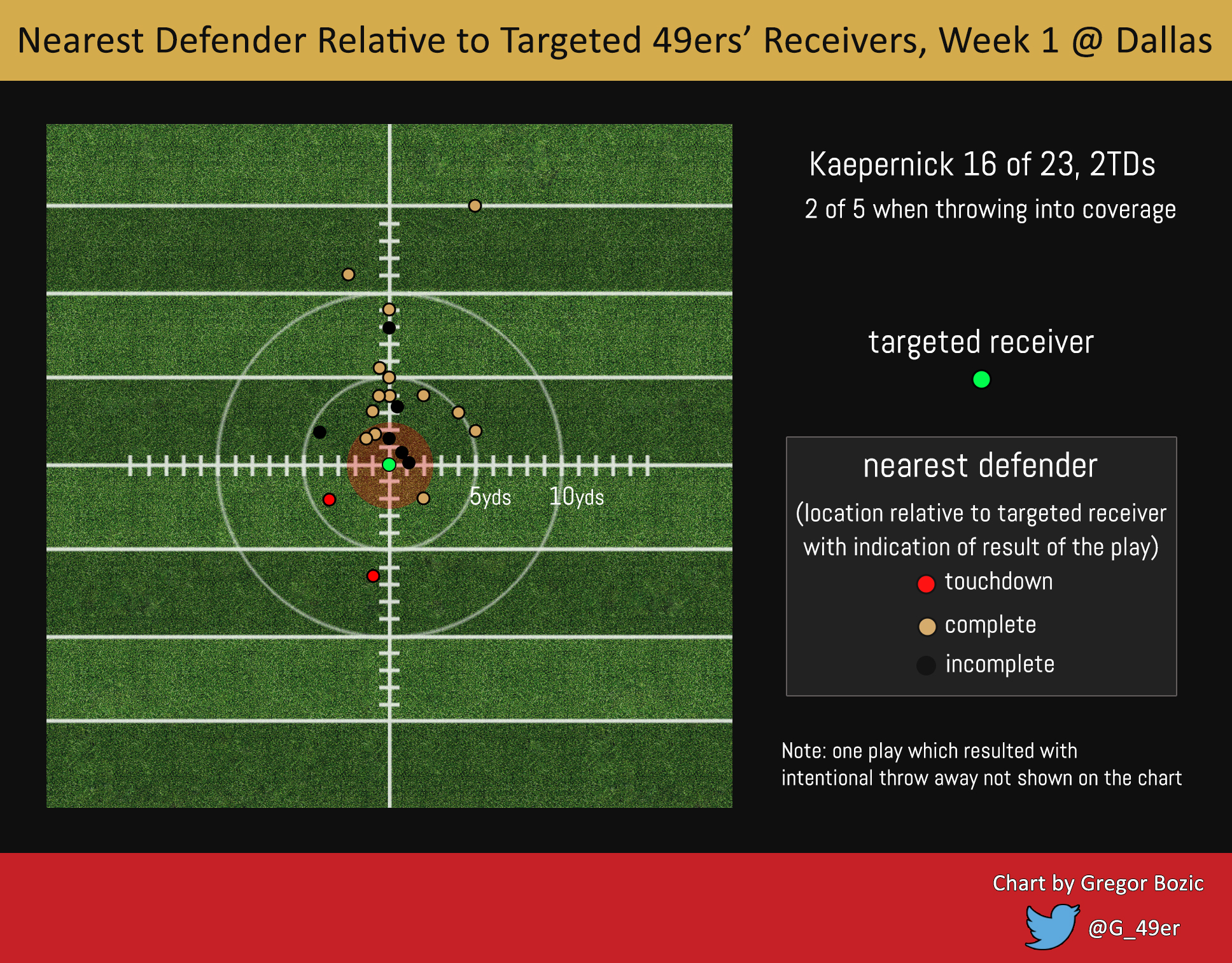 In Week 1, the average distance between targeted receiver and closest defender was 5.1 yards. That's almost a whole yard more when compared to 16-game average (4.3 yards). The above chart can tell the story of how open 49ers' receivers were against Dallas who had one of the worst pass defenses in the league. Kap attempted only five and completed two passes when defenders were two and a half yards or closer to targeted receiver at time of throw.

But to put a label or degree of difficulty on each of Kaepernick's passes we have to take into account the other two factors. If we look only at pass attempts and if we ignore the intentional throwaway, the quarterback of the 49ers was pressured on only three of his 22 pass attempts (13.6 percent).

One of those was the first touchdown toss to Vernon Davis on a scramble play on which Kap nearly fell down, but was able to escape the pressure and found wide open tight end. Another one was Kap's best throw of the game when he connected with open Anquan Boldin on post pattern. Kaepernick, while being under pressure, stayed in the pocket and hit Boldin in stride allowing his receiver to gain 14 yards after the catch for a 37-yard completion. Kaepernick attempted five short, 15 intermediate and two deep passes against Dallas. Week 1 average length of a pass measures 20 yards, two yards below season average of 22 yards.

Based on defined criteria, I marked only four pass attempts as difficult, two got the moderate degree of difficulty and 16, or 72.7 percent of the total, were labeled as easy throws, which is the highest rate of any of 2014 games. On those easy throws Kap went 13-for-16 (81.3 completion %) for 128 yards and one touchdown. 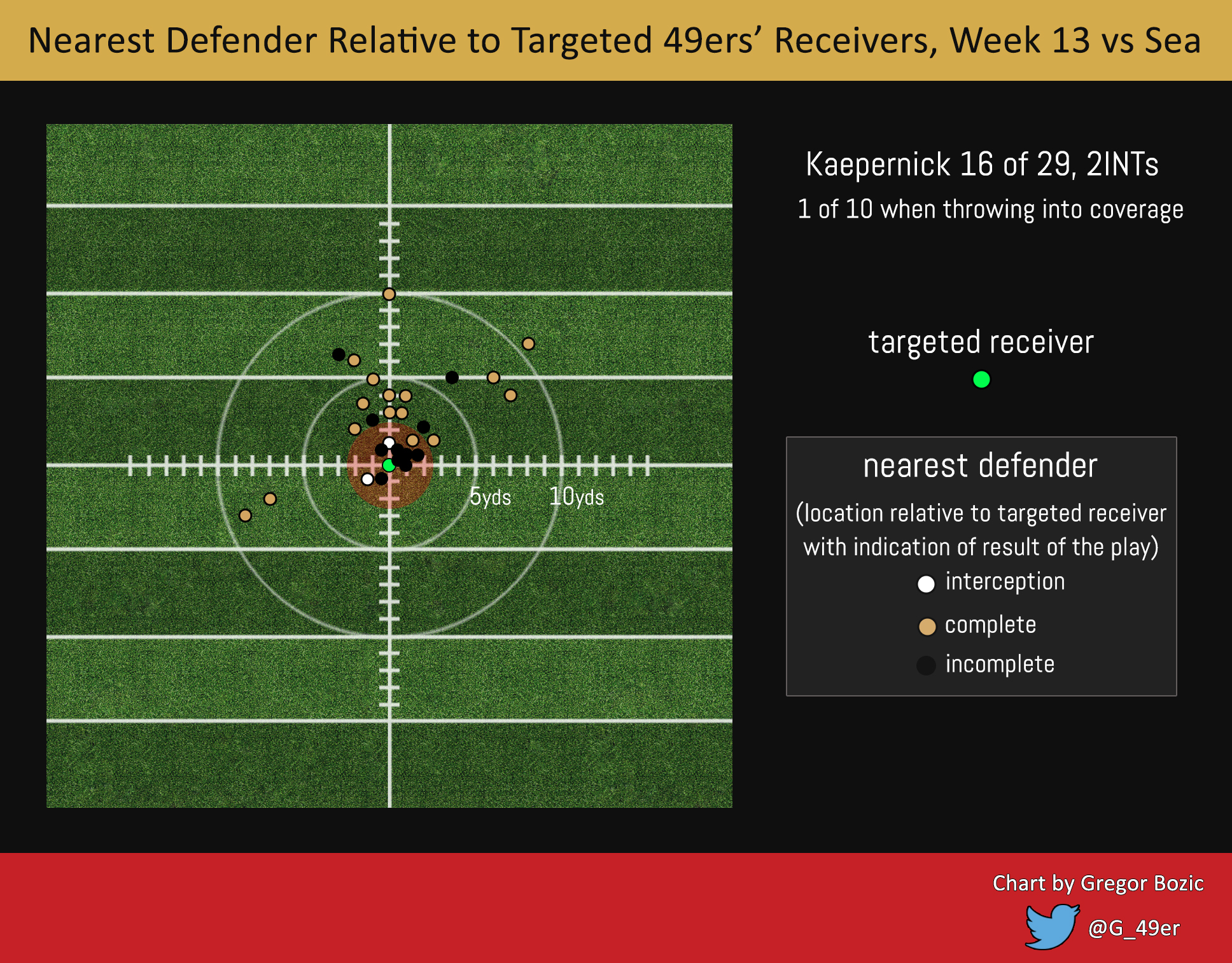 The above Week 13 chart is a different kind of animal. With the average distance between targeted receiver and closest defender at 3.9 yards and a much higher, 24.1 percent pressure rate (taking into account only pass attempts), Kap in general attempted more difficult throws when compared to the opening game of 2014 season at Dallas. There weren't many plays where he could just sit back in the pocket and pick one of his receivers running open. He completed only one pass out of 10 thrown into coverage and two of those sailed into the hands of Richard Sherman. Fourteen of Kaepernick's passes were short, seven intermediate and eight deep.

The average pass length for Week 13 measures 21 yards. I put easy mark on 12 of Kaepernick's 29 passes (41.4 percent), but half of those came late in the game when the Seahawks were protecting fourth-quarter lead, willing to surrender short gains underneath. Kap completed 11 of 12 (91.7 comp. %) easy throws for 81 yards. Seven of the total were labeled as moderate and 10 or 34.5 percent as difficult throws - second highest rate behind only Week 10 game at New Orleans in which Kap attempted highest number of deep passes including 58-yard bomb to Michael Crabtree.

There were games during 2014 regular season in which Kap faced a lot more pressure. And there were cases with lower average distance between target and closest defender and games in which Kap on average threw longer passes. But the combination of decent pressure and exceptionally good coverage made Week 13 game probably most difficult one on the 2014 schedule for Colin Kaepernick who was also sacked four, and forced to scramble three times.

Short passes that have to be lobbed over a wall of blockers and pass rushers, even to a wide open target, can be difficult to execute, especially for the quarterback of the San Francisco 49ers who had problems to put the necessary touch on the ball. Throws along the sidelines are in general more difficult to make than the ones over the middle. Defender positioned in front of targeted receiver, looking from quarterback's perspective, presents different kind of problems if compared to a defender who is located behind the target at time of throw.

So the used method is far from being perfect, if anything, it shows how the degree of difficulty is very much connected with the quality of the opponent Kap and his team faced. A simple way to test the approach would be to look at completion percentages separately for easy, moderate and difficult passes. After all, easy throws should be easier to complete than the moderate ones, and those moderate easier than attempts labeled as difficult. 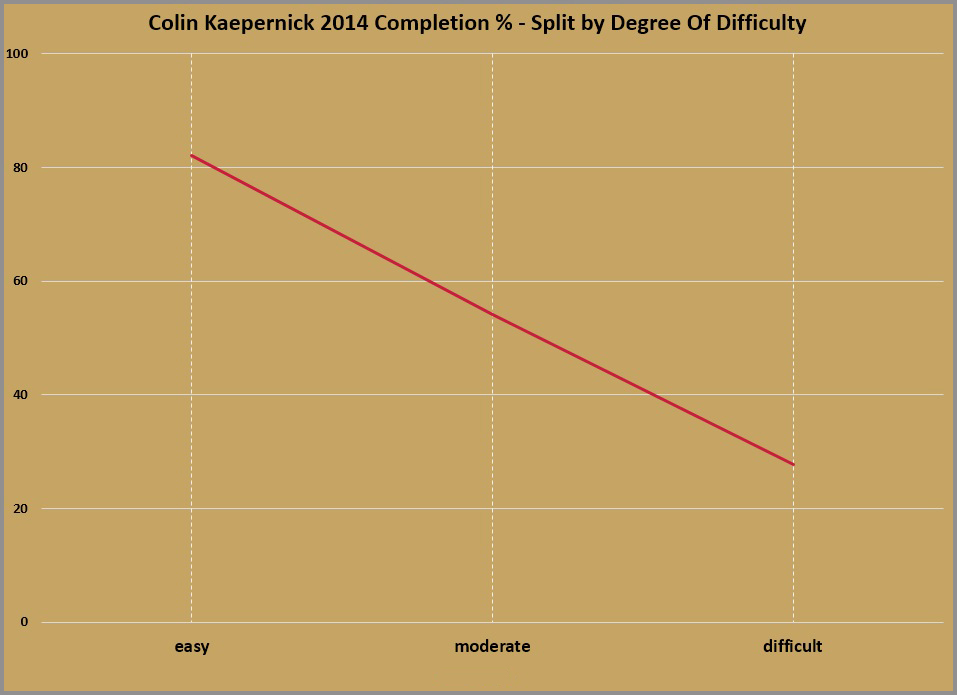 As you would expect, completion percentages drop with the degree of difficulty. Going from 82.1 percent on easy throws down to just 27.8 percent on difficult ones.

Would love to hear your ideas, so feel free to leave comments with any suggestions you might have on how to improve on this relatively subjective task of putting degree of difficulty on quarterback's pass attempts. It's something I'll be looking closer at when reviewing 49ers' games in the future.