I looked into down conversion chances in the Harbaugh era to see in I can identify the main reason of the decline of the 49ers offense. To do this, I listed all 49ers offensive snaps through 2011-14 by success and play type (pass/run), identified play type (pass, QB run, non-QB run, kneel down, sack, ST trick/botched play), and threw a bunch of filters on the data. At the end, was a bit surprised that the main culprit for the decline of the offense can be isolated, and accounts for all the decline of passing efficiency (in yards per attempt) between 2013 and 2014.

The first graph tells a lot. The chance of a 1st down conversion, for an attempted pass, QB run, or other ('RB') run playcalls. It actually points at the main culprit mentioned earlier, although not that apparent. It should also be noted that "pass" plays do not include sacks here and in the following graphs.

Before you ask, the conversion chances in 2012 for Kaepernick and Alex Smith are effectively equal for all three downs. The main difference was that Kap averaged 1.8 yards longer on completed passes.

Second down play, except the 2012 (positive) outlier, remained constant, even improved slightly. 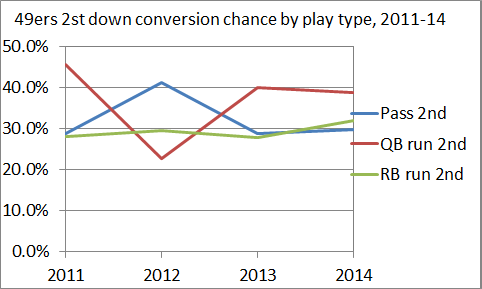 All these graphs support the consensus on this site. The lack of receiving deep threat in 2013 and 2014 led to stacked boxes, which lead to less long runs for the RBs. It did not help either, that the team did not have a change-of-pace back since Kendall Hunter tore his Achilles in 2012. The second down conversion chance, and average gain improved greatly in 2013-14 for 2nd and 3rd down runs by a non-QB. So our run blocking, helped by a resurgent Frank Gore, was fine, despite the narrative. The main problem was 1st down rushing.

The next figure tells us why not all hope is lost, and a reason why Geep Cryst was promoted to offensive coordinator. 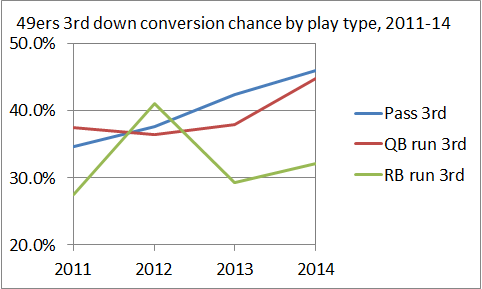 Was this improvement because the shorter passes and runs on 1st-2nd down resulted in more failed conversions and shorter to-go distances in 2014? Let's look at the 3rd down to-go distances for pass and play selections.

Does not look like it. But let's separate 3rd-and-long (say, 9 yards and longer) and 3rd-and-not-so-long situations, and look at conversion chance:

Kap's 3rd-and-long conversion% actually did not change in 3 years - but they are low. If Kap cannot convert in 1st-and-10 pass plays, one should not expect better performance on 3rd down, when the D knows that a pass will be called. On shorter distances, however, Kap improved leaps and bounds. Overall, Kap was completing 3rd-down passes well above the expected rate, good for #7-8 in the league, as shown by Chase Stuart.

Now take a look of how the passing offense evolved by downs.

Look at the 2013 and 2014 1st down data (bolded) to see the difference between the last two seasons. The 2nd passing split actually improved, and got worse somewhat worse on 3rd down, to a lesser extent than on 1st downs. That 1st down data however shows a radically worse QB in 2014. The average gain per dropback (pass attempts+sack) fall from 6.81 to 5.03. Multiply it by 189 dropbacks, and you get 337 yards difference. The 13 extra 1st-down conversion (using the 2013 pass conversion chance) would have resulted in an estimated 6 drives that was not stalled, or an expected extra 120 passing yards or so. Altogether, it is the difference between a 3369-yard and a 3800-yard season.

As 2nd and 3rd down stats did not change to the same extent, we don't even have to look for any additional clues – the main dysfunction of the offense was identified. I guess the front office found this as well. Why it did not work, we also have a pretty good idea.

So it turned out that the teams' offensive regression was mostly limited to 1st downs. According to some metrics, the team actually improved on 2nd downs and 3rd downs - especially conversion chance in 3rd-and-short situations.

At this point the blame is spread around. It is Baalke's fault in not bringing in deep threat WRs in 2013/14. It is Roman's/Harbaugh's/Geep's/Jed’s fault in not designing 1st down plays that included fast developing routes or screen passes to defeat the pass rush.The ever-changing OL, which did had like six different starting lineups in the first 9 games just could not pass protect. Their run blocking turned out to be better than in 2013, although it is partly to a resurgent Frank Gore. And it is also Kaepernick's fault that he did not execute all those badly called/designed plays.

The guys who were calling most of the 1st down plays are not with the team anymore, so there’s that. The team brought in two deep receiving threats, and there should be at least two healthy TEs (instead of zero) available for a change.We promoted the QB coach who – taking the optimist view here- is responsible for improved performance on 2nd (not a single INT) and 3rd downs (in conversion %). RB and OL coaches were brought in to fill in the vacancy. The quiet confidence of the team, despite the overwhelming media consensus, might not only be some empty posturing. Fixing the 1st down mistakes - reverting to a 2013 level efficiency, even leaving later-down plays at a similar level as in 2013-2014, and a higher offensive tempo projects to a rebound for Kaepernick and the whole offense.

I decided to isolate 10-to-go situations and look at down conversion chances, for the NFL average and the 49ers.

The team dropped from NFL-average in this situations to #30 in the league - only Oakland and Jacksonville was worse. For Kap's numbers, 2014 2nd-down figure is an outlier, which disappears if we take a slightly bigger data set (8 to 12 to-go). Taking this bigger dataset the by-down differences in conversion% disappear. NFL-wide conversion chance is also independent of downs.

So we arrive again at a lack of deep threat and pass protection.

Edit2: I had mistakes in the table about 3rd-and-long and 3rd-and-short conversion chances. These are now corrected.