No matter how bruised, bloodied, or bandaged, he dominated offensive lineman on the football field. Away from it, he lived a solitary life full of simple pleasures: drinking beer, feeding cattle, and watching the rolling hills of central Missouri. We take a look back at the career of Justin Smith, the NFL's last true blue-collar badass.

We won't be seeing another player quite like Justin Smith. Not for a long time.

Perhaps for as long as American football has been around, there has existed this archetype of the "blue collar, lunch pail" sort of player (throw back a Bud Light if you've heard that one before).  You know — the guys first in and last out.  The ones who are just as effective eluding cameras and reporters as they are bulldozing offensive linemen, shoulder injuries notwithstanding.

"It's just time to go. It was just time for me to move on." - Justin Smith

More than anyone else in the last decade and a half, Justin Smith embodied that archetype, a displaced personality perhaps belonging more to the rugged ‘Wild West' NFL years of yore.  I mean, if you told me Smith dropped out of the womb into a three-point stance with his head down and one hand in the dirt, I'd have no reason to question it.  The guy has the Anheuser-Busch logo tattooed on his left bicep for crying out loud which, alone, makes him 400-percent manlier than you, I, and both our dads combined.

Take his official retirement press conference, for instance, conducted entirely over telephone — another perfect, little, allegorical cherry-on-top for a career largely spent away from the spotlight.

"You guys ain't gonna get me in a room and make me cry," he said.

Not unlike most players who decide to finally hang up the cleats, Smith cited the physical mileage on his body as the main reason for leaving the game, but of course, it had to be articulated with the sort of eloquence and majesty only he knows.

"You've got to be full of piss and vinegar when you step on the field. As you get older, it's harder to get that same intensity going, week in and week out. It's just time to go. It was just time for me to move on."

I don't think I know what it feels like to be full of piss and vinegar, and I feel confident in saying I never will, especially if it means sharing even the same stratosphere of intensity as Justin Smith.

He busted his butt for 14 long years, seven of which were in San Francisco, and he only missed two games due to injury. Can you believe that? Two games in 14 years.  That's like having perfect attendance from kindergarten all the way to your senior year of high school, except instead of sitting behind a desk all day long and doodling in a notebook, he was, you know, violently throwing his body into 300-pound men and stuff.

My point is, if Smith, with all of his country-forged grit and unmatchable work ethic, says he can't do it anymore, I believe him.

It doesn't get more ‘humble beginnings' than growing up on a 1,200-acre cattle ranch in the tiny town of Holts Summit, Mo. — population: 3,420 — just 7 miles outside of state capital Jefferson City.  Yet, in some ways, Smith's hometown served as the perfect incubator for the kind of man he would become.

It was the theatrics you would sooner expect from a mixed martial arts cage fight than a high school football game.

Early on in his life, up until about the age of 10, Smith helped his parents, Dave and Ginger, in all tasks related to caring for their cattle.  Eventually, the family farm was sold, but it didn't take long for Smith to take on work from Ron Cole — then-head coach of Jefferson City High School's football team — lifting feed buckets and tossing hay bales under the unforgiving Missouri summer sun.

As one can imagine, that sort of grueling, physical routine often instills a rarefied and everlasting work ethic.  It did just that for Smith which served him well throughout his football career at Jefferson City High.  There, he was a workhorse, playing both defensive end and tight end.  And he dominated.

"Justin, you can't do that," Coach Cole once warned Smith, who would barrel an opposing running back and send him airborne out of bounds, or hoist a quarterback off his feet before suplexing him into the dirt.  It was the theatrics you would sooner expect from a mixed martial arts cage fight than a high school football game. 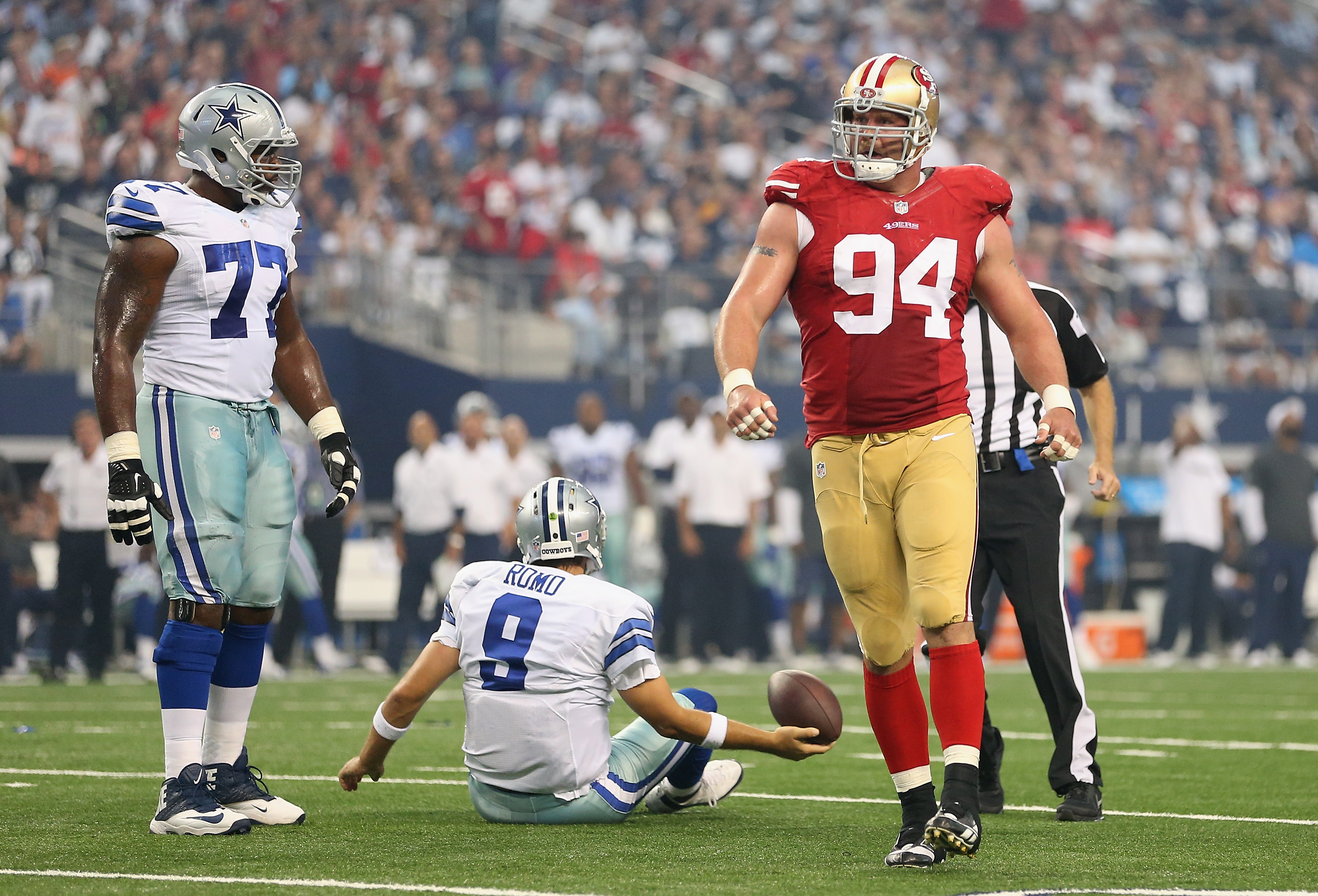 It became a regular sight for Smith, still filling out his 6-foot-4 frame, to wreak absolute havoc on the field.  College scouts noticed.  After his junior year, Smith was offered a full-ride scholarship to play football at the University of Missouri.  Smith committed to Mizzou, much to the initial chagrin of Coach Cole who was concerned his star pupil would let off the gas during his last season at Jefferson City High, now having charted his next destination.

It became a regular sight for Smith to wreak absolute havoc on the field.

So imagine the look on his coach's face when Smith finished his senior year being named All-State and All-America at defensive end and led his team to the 1997 state championship where Jefferson City High won it all — the 10th title in school history and also their last.

Even at the next level of competition, Division I college football, Smith appeared superhuman still.

As the Mizzou Tigers gathered in the spring of 1998 for their first day of conditioning, Smith, a freshman, joined the defensive backs group for sprints.  A junior player noticed and told Smith he was in the wrong group.  But Smith knew exactly where he was.  That spring, and every spring he spent at Missouri thereafter, Smith ran among the fastest streak of Tigers and held his own.

It wasn't long before more records fell.  Smith became the first true freshman in over a decade to start every game for the Tigers (in total, he started 33 consecutive games at Missouri).  As a sophomore, he set the school's sack record with 8.  As a junior, he eclipsed his own record from the year before with 11, along with 24 tackles-for-loss and 97 total tackles, and earned first-team All-America and first-team All-Big 12 honors.

The small-town country boy couldn't stay out of the spotlight forever.

Smith was made the No. 4 overall selection in the 2001 NFL Draft by the Cincinnati Bengals with whom he would spend the first seven seasons of his professional career.

His tenure in Cincinnati was punctuated by moments of gridiron brilliance.  He recorded 8.5 sacks in his first year, most by any Bengals rookie in team history, and thrice led his team in sacks. But like his previous stop at Missouri, each and every one of his countless individual accolades were ultimately rendered irrelevant by otherwise unremarkable team records.

Between 2001-07, the Bengals compiled a rather underwhelming 50-62 record, finishing above .500 just once in 2005 which was also the only time they reached the playoffs — they lost in the Wild Card round, 17-31, to the division rival Pittsburgh Steelers.

After the 2007 season, with the Bengals reluctant to open up their wallet for a second contract, Smith officially become an unrestricted free agent.

Minnesota was in the mix.  Jacksonville a possibility as well.  But before anybody else could get a good look, Smith was whisked off on a helicopter tour of the San Francisco coastline.

"It just felt right. The city felt right," Smith told reporters back in 2008. "The situation mainly felt right and I figured ‘Why go on another visit if you were going to be back here?'"

Smith cancelled scheduled visits with other suitors and signed a six-year, $45 million deal to join the 49ers.

At the time, it made a decent amount of sense.  Bryant Young, a mainstay on the 49ers' defensive line for 14 years, had just called it quits.  Someone had to replace him.  But the general reaction once Smith signed on the dotted line was...lukewarm, to put it lightly.

The move was panned by fans and critics alike.  I don't believe in public shaming, so I won't name names, but a simple Google search pulls up some pretty sweet archived forum posts that call it "the worst free agent signing ever." That the 49ers "overpaid" for a "mediocre, aging" player.  And my personal favorite: "I'd rather have Marques Douglas."

In retrospect, we know now that none of these comments are true.  They actually couldn't possibly be any more false.  Smith turned out to be, easily, one of the greatest free agent acquisitions in recent memory and, arguably, the most important chess piece in what was a period of great transition in San Francisco.

But something else remarkable happened — the 49ers finally broke through.

In 2011, under rookie head coach Jim Harbaugh, San Francisco posted a 13-3 record in the regular season and advanced to the playoffs for the first time in almost a decade.  And it was during this run that we saw, what I am convinced is, one of the greatest games in NFL history.  You know the one.  Divisional Round against the New Orleans Saints.

Coincidentally, this game also produced one of the most memorable and iconic plays of Smith's career in which he steamrolled through offensive tackle Jermon Bushrod, who looked like he was wearing roller-skates, before reaching over his shoulder to pull down a petrified Drew Brees with just one hand.

It really did feel like a magic carpet ride, didn't it?  But it wasn't meant to be that year.

They got even closer the following season reaching Super Bowl XLVII, but, again, fell just short. 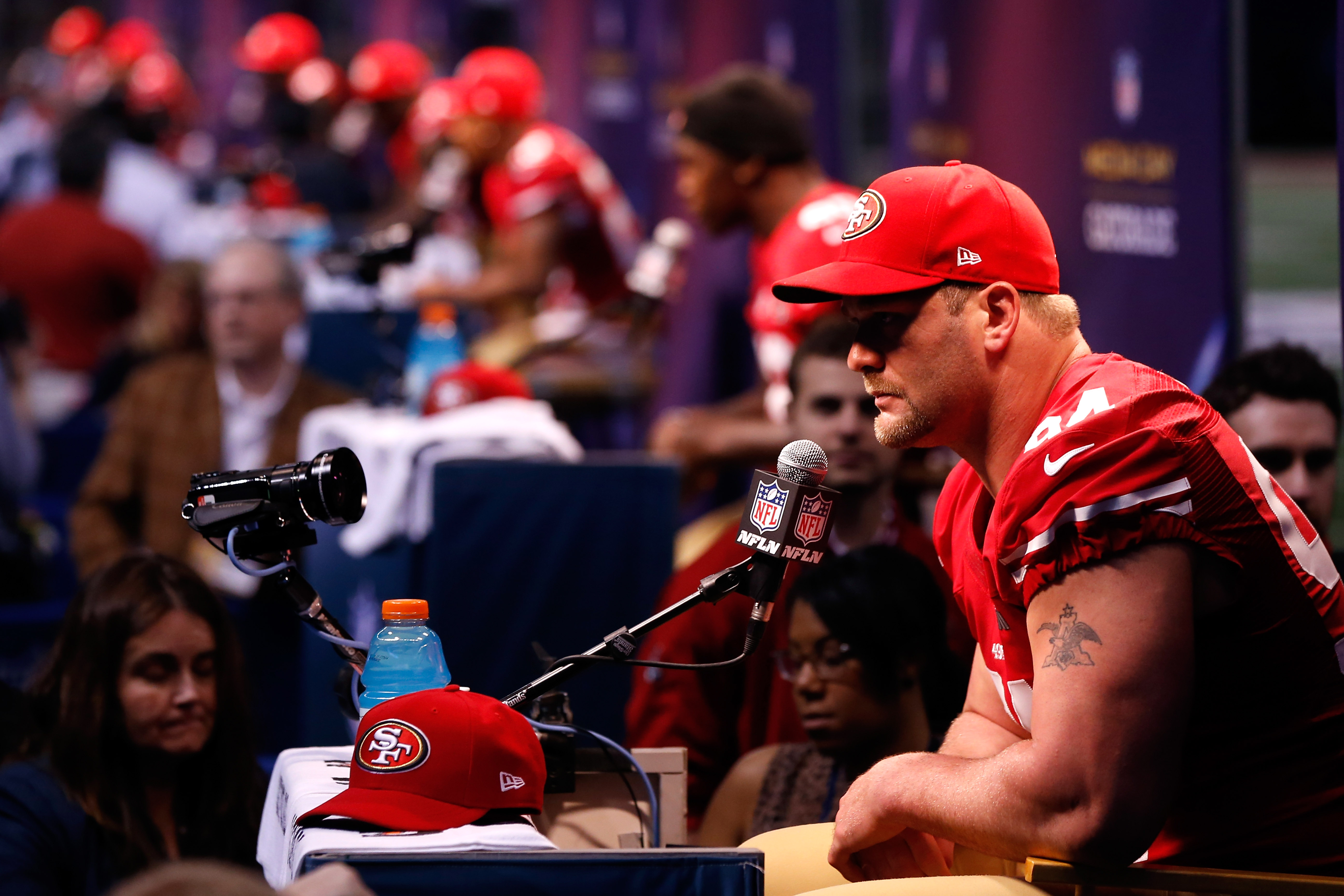 It was excruciating.  But Smith maintained an air of cautious optimism.

"I think the mindset that I've kind of been spreading a little bit to the guys is, ‘Your team isn't always stacked forever,'" Smith told reporters back in June of 2012, just four months removed from the Super Bowl loss.  "We're not going to be able to keep this team together forever. Even age-wise, the whole team won't be the same."

Justin Smith will forever be immortalized as one of football's most quietly compelling characters.

His words then were strangely prophetic.  And now, in hindsight, considering everything that has happened this offseason alone, they ring a rather tragic tone. Haunting, even.

The topic was revisited during his retirement call with reporters: What did it mean for Smith to finally have a legitimate shot at football's greatest prize in his final years?

"Oh, it was great...Every year there's less than a 10-percent chance you'll really win it. Deep down you know if your team has a shot to do it," Smith said.  "For four years there, to walk into camp thinking you can win a Super Bowl was pretty cool."

In my mind, Justin Smith will forever be immortalized as one of football's most quietly compelling characters.  Compelling not because he was flamboyant, flashy, and starving for the spotlight, but because he was everything of the opposite.  For Smith, football was work.  And as any salt-of-the-earth farm boy from the Midwest would undoubtedly tell you, work is inextricably bound to life, love, duty, passion, and all of the above.  He's the last of a rare breed, and the game will miss him more than it knows.

Sure, it's a bummer he couldn't ride off with a Lombardi trophy, but we can all take a special sort of solace in knowing that, somewhere on a ranch in central Missouri, that cowboy can finally kick up his spurs, crack open a cold one, and just enjoy the sunset.

At last, the ride is over.