Part 1 will focus on the scheme utilized by the Jacksonville Jaguars in 2016. It will indicate the players used by the Jaguars, suggest how the players currently on the 49ers roster could fit the scheme and how it might be tweaked to best suit the 49ers’ players.

Robert Saleh, the 49ers’ new defensive co-ordinator, was poached from the Jacksonville Jaguars defensive staff and was previously with the Seahawks . Saleh’s pedigree does not guarantee his success, but fans will hope that he will effectively introduce a defense similar to that used by Seattle, Atlanta and Jacksonville.

The Jaguars defense was their strength in 2016. Unsurprisingly, the effectiveness of their defense was largely overlooked as a result of the team’s awful record. The defense ranked sixth best in yards allowed per rush and joint second best in yards allowed per pass, demonstrating the team’s failure was largely a product of its offensive struggles.

Fundamentally the dichotomy of a talented playing body who were well coached and put into a defensive scheme that accentuated their strengths produced a defense that far outstripped that 49ers defense in 2016. The question will be if the 49ers’ players can adapt to the scheme, if the scheme will be effectively adapted to them, and whether they are talented enough to achieve a level of performance close to their Jaguars counterparts.

OTTO - on the ball linebacker

WILL - weak-side linebacker (off the ball)

OTTO is used in order to avoid confusion, as the player can line up on the weak side or strong side of the formation depending on the specific play called. To call them the SAM or WILL linebacker can be misleading.

SOME OF THE JAGUARS’ LOOKS 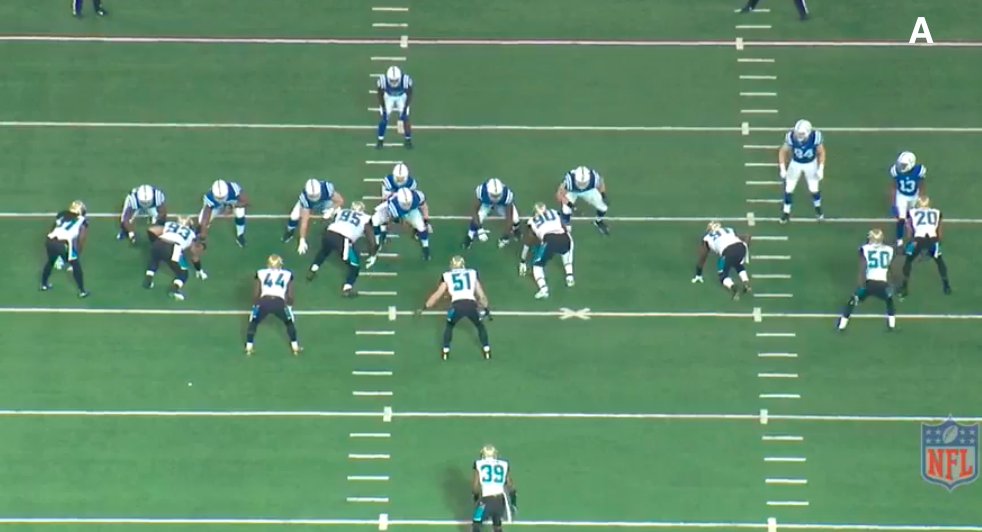 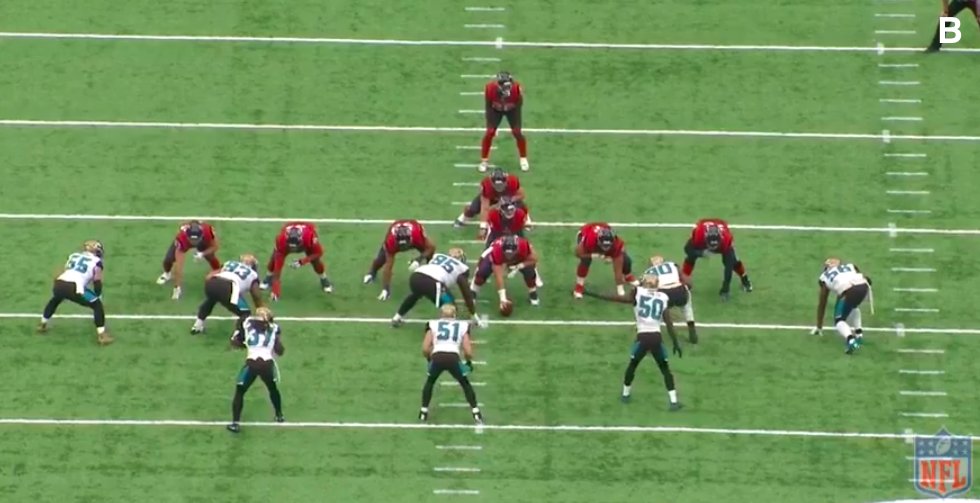 C - Note Jack OTTO on weak side; Prince Amukamara (#21, CB) in box; Yannick Ngakoue (second from right, #91, DE) is on the strong side; Cyprien SAM 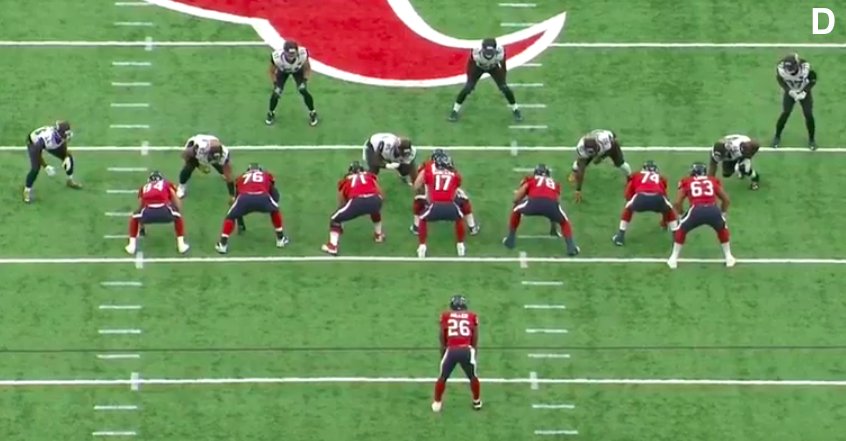 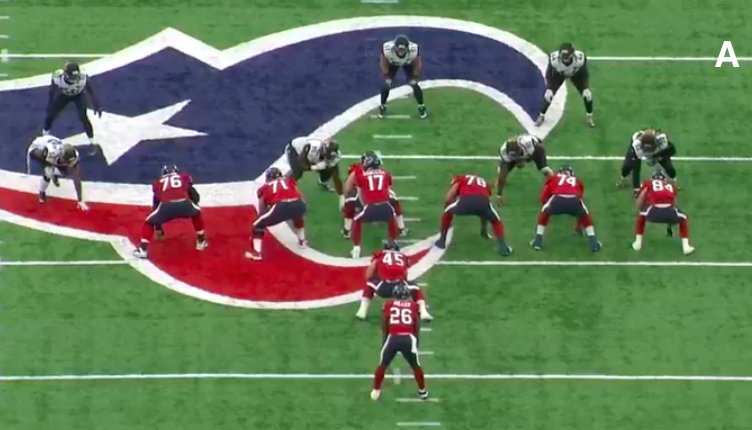 A - Note Jack at SAM

B - Note Jack as OTTO on weak side 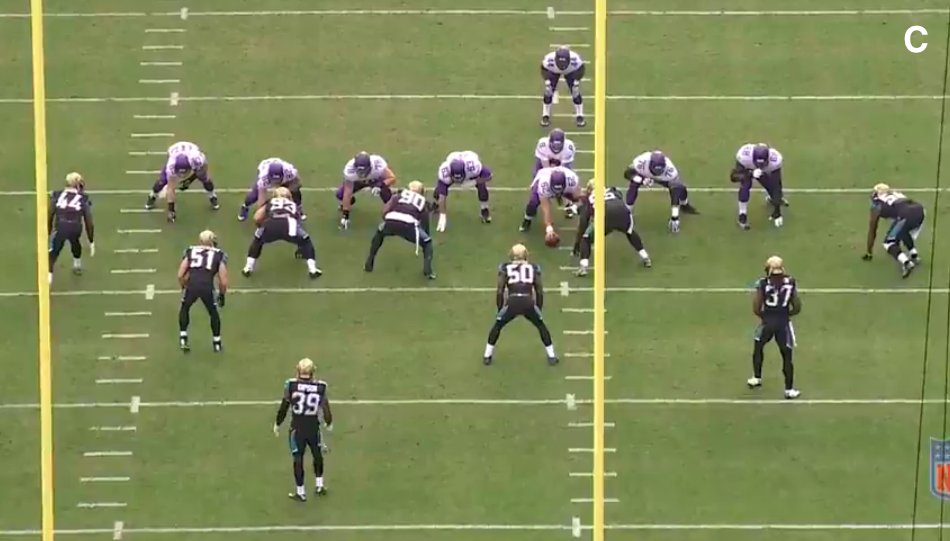 C - Note Jack as OTTO on strong side 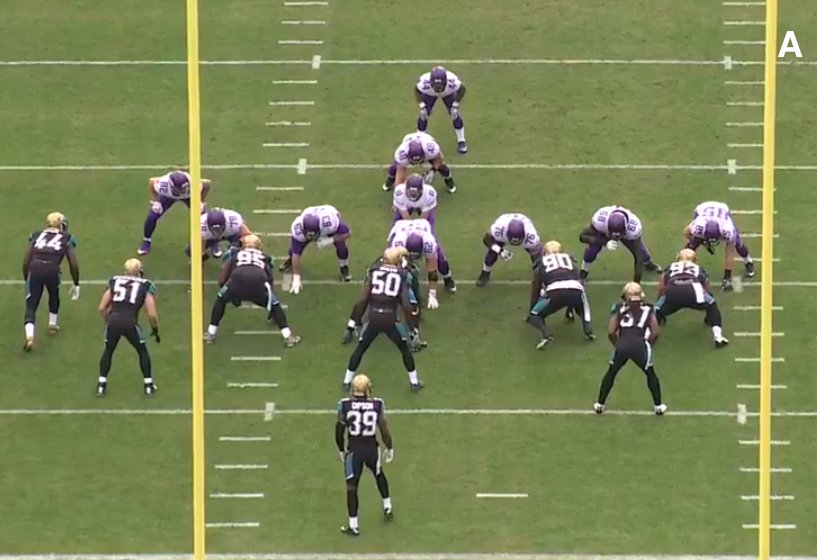 A - Note Jack at OTTO; 3 defensive tackles; strong side defensive end at one end; Cyprien in box 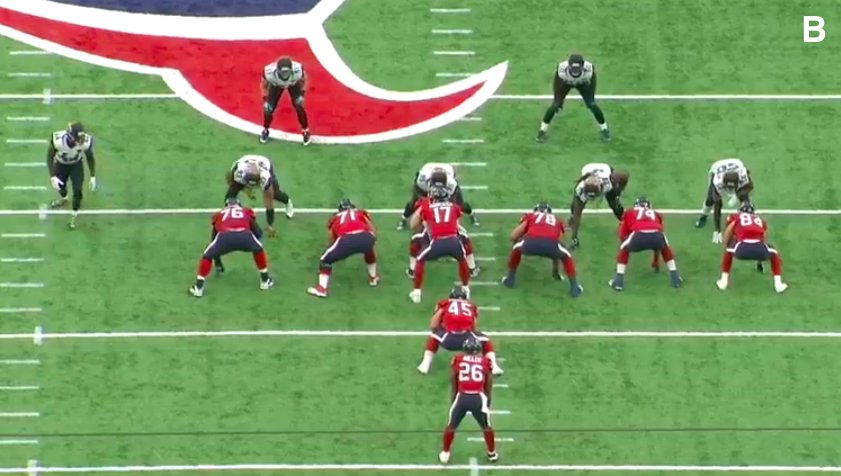 B - Note Jack at OTTO on weak side 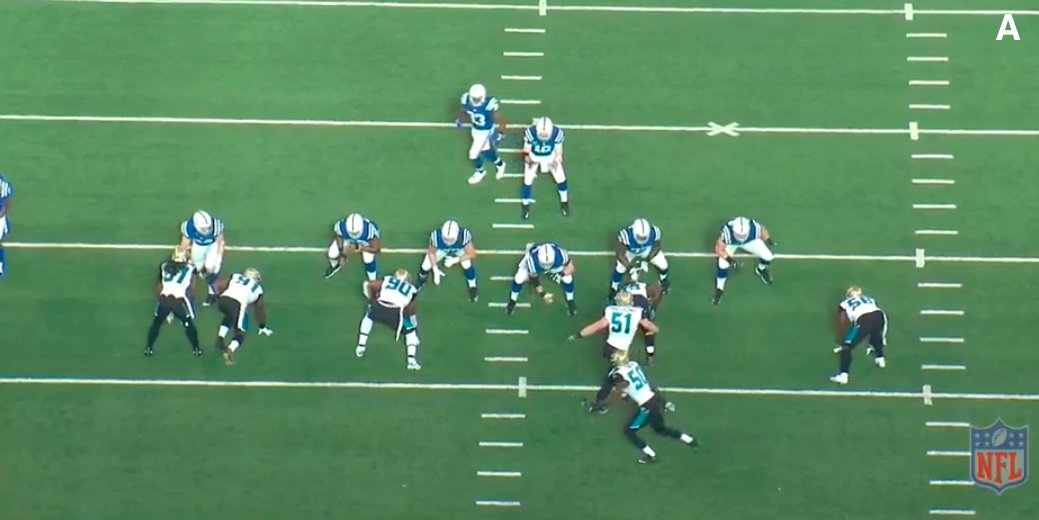 A - Note 4-3o style front; both Ngakoue and Dante Fowler Jr (#56, DE) are nominally LEOs and both are on the field; Cyprien at SAM (man cover on TE); Smith covering RB man to man 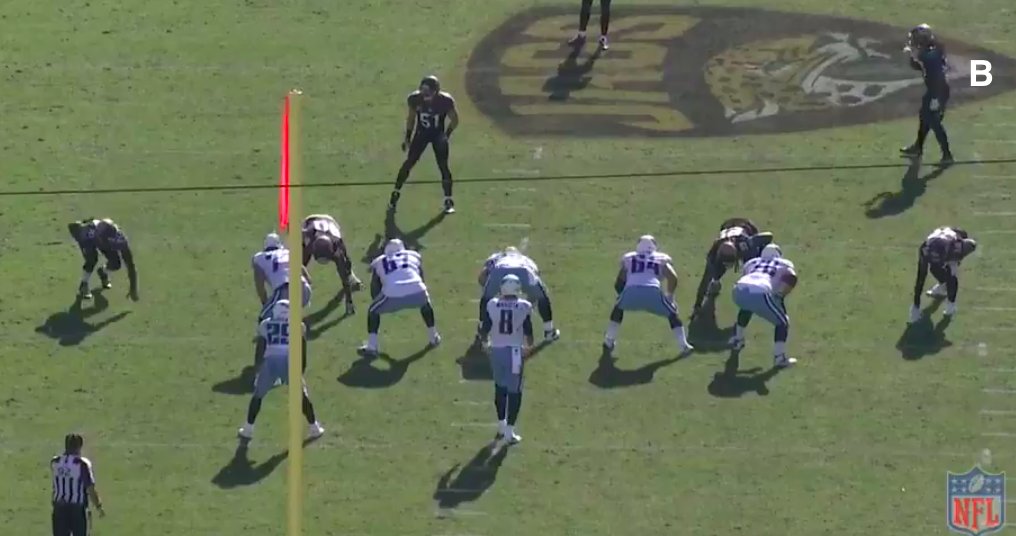 B - Note two wide 9s; two 3-tech DTs (almost 4i tech) - this also appeared on some base downs when the running back split wide 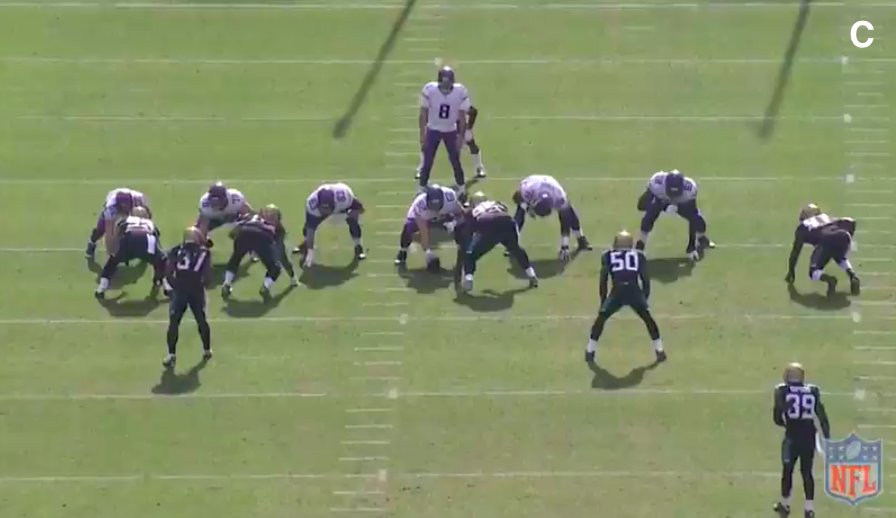 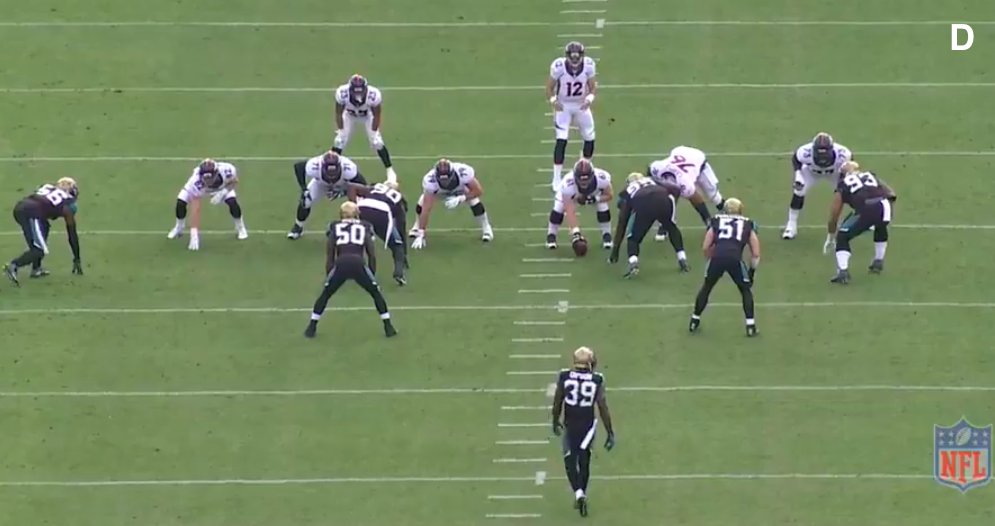 D - Note unusual alignment on defensive line, both 3-tech pass rushing tackle (Malik Jackson, #90) and LEO (Fowler) aligned to the same side of the defensive line with run stoppers on other side 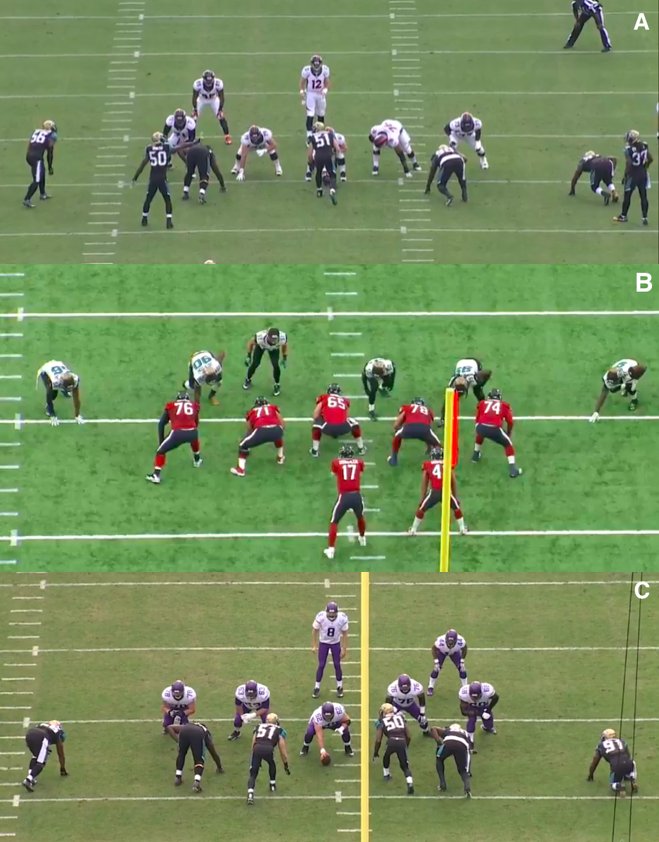 The Jaguars defense was successful because it had very clearly defined roles for its personnel that allowed them to operate very specifically within the scheme. Establishing and coaching these roles to the 49ers’ players is going to be the defensive coaching staff’s most important task this offseason and beyond. These roles are fairly easy to outline:

It seems most likely that Arik Armstead will attempt to fill this role on base downs, as well as having the capacity to slide inside and rush the passer within some of the aforementioned double three-tech defensive tackle nickel packages. That role would be slightly different from what the Jaguars expect from Alualu as he was a two-down player for them.

Ron Blair would also be an option to fill this slightly altered role and may actually be the better option. Quinton Dial could be expected to play more like Alualu as a two down run stopping end who comes off the field on third downs.

The 49ers could use DeForest Buckner or Arik Armstead here. There are of course questions about them transitioning to the role but they both have the length and ability to beat interior blockers in order to be effective. The big question mark for both players is about their ability to stop the run.

Nose tackle - The Jaguars’ nose tackle varied significantly this year, but again this player is largely a two down player. At this point, Earl Mitchell looks like the option at nose tackle, backed up by Chris Jones and Mike Purcell.

LEO - Yannick Ngakoue was the LEO for the Jaguars. Neither the Jaguars or the Falcons have a LEO with Cliff Avril’s explosiveness but Ngakoue proved himself to be an effective weapon off the edge with 8 sacks as a rookie and 4 forced fumbles. He was used in a variety of ways, sometimes being on the strong side of the formation in certain 4-3 packages.

The 49ers do not have a player with the Ngakoue’s combination of pass rushing productivity and athleticism, but at this moment it appears that Aaron Lynch is the player they will try and use as their LEO on base downs. He has a similar athletic profile to Ngakoue (when in shape) and can provide similar versatility regarding his ability to play on the strong side of certain packages if required.

Sub-package edge rusher - Dante Fowler Jr is the backup LEO for the Jaguars and comes in as a situational pass rusher, normally on third downs. The 49ers could use both Eli Harold and Tank Carradine in this way, or alternatively play the OTTO here.

OTTO - Myles Jack. He tends to only be on the field on rushing downs. If he is not the OTTO he will play as an off ball linebacker, normally as the SAM. Jack is a rare player, who could quite capably play as a WILL as well. He can rush the passer, cover the hook and flat zones as well as tight ends and running backs (occasionally being asked to cover receivers) and defend the run.

The 49ers do not have a player with this versatility but Ahmad Brooks or Malcolm Smith make the most sense as OTTOs, though will require less varied responsibilities to be successful.

MIKE - Paul Posluszny. He primarily operates off the ball, covering hook zones and occasionally running backs. Additionally he is often used as a pass rusher or at least threatens to rush, primarily in A gap pressure looks in nickel packages. Navorro Bowman could be very effective in this role.

WILL - Telvin Smith operates as the second off ball linebacker. He is more of a traditional WILL, though he does take snaps at SAM, normally if in man coverage on a tight end. Smith is primarily the coverage linebacker, playing flat zones, hook zones and going man to man on running backs, tight ends and even wide receivers. I saw him take a snap at cornerback on one occasion.

The 49ers do not have a player with Smith’s athleticism or versatility but Ray-Ray Armstrong would make the most sense in this role. Alternatively, the 49ers could look to slide Eric Reid or Jaquiski Tartt into the role.

Strong safety - Such a move would make sense as the outside linebackers had essentially identical responsibilities to the strong safety in Jacksonville’s scheme.

Jonathan Cyprien took 49% of his snaps as an edge player or linebacker per PFF. Only 24% of his snaps were taken in a standard safety position whilst the other 27% were taken lined up as nickel corner (primarily on base downs and normally in zone coverage). He lived in the box. He had identical coverage responsibilities to Telvin Smith, covering tight ends, running backs and wide receivers man to man, as well as hook and flat zones. Jaquiski Tartt (see breakdown here) and Eric Reid could both fulfil this role well.

Cyprien was the top-ranked safety against the run per PFF (98.8). Per sporting charts Cyprien made 4 run stuffs (denying a running play at or before the line of scrimmage). This was the third highest score amongst safeties, with Tony Jefferson making 10 stuffs, Landon Collins and Calvin Pryor making 5 each and Cyprien being one of seven safeties to make 4. That list includes Eric Berry, Malcolm Jenkins, DJ Swearinger and Reshad Jones. The surprise in that group? Tartt; who achieved that number of stuffs despite playing significantly fewer snaps.

Free safety - Tashuan Gipson. He spent the vast majority of his time in the deep middle of the field. He very rarely played in the box and I could count on one hand the number of plays where cover 2 was called. Gipson is not a great deep centre fielder; this showed and he was bailed out by Jalen Ramsey on a few occasions.

Jimmie Ward would seem to be a good option at this role (see breakdown here) and has considerably better range than Gipson.

Outside cornerbacks - Jalen Ramsey and Prince Amukamara. Both were asked to get involved in run defense, as well as lock down the sidelines. In cover 3 they often looked to funnel routes towards Gipson, though Ramsey was asked to live on an island frequently. In cover 1, they both tended to be left well alone without significant help from the deep safety or hook zone player.

The 49ers definitely do not have a corner as talented as Ramsey, or arguably Amukamara. This talent allowed the Jaguars to be aggressive with their blitz calls as well as covering the lack of quality at free safety. Rashard Robinson and Tramaine Brock are the 49ers first choice corners currently, with little depth of proven quality behind them.

Nickel corner - Aaron Colvin. Colvin was effective in this role, especially in coverage. Jimmie Ward could play here (if a free safety is drafted) or the 49ers could look to K'waun Williams, Will Redmond or Keith Reaser.

It is clear that the 49ers have the personnel to be able to replicate or closely copy some of the roles within the Jaguars defense, though at several key positions they are unproven or below the level of player that the Jaguars possess. The 49ers could of course adapt the way the players are used slightly. As I have indicated Blair or Armstead could play a more diverse roll than Tyson Alualu, the 49ers could use their OTTO as a situational pass rusher or their second strong safety at WILL. These are all potential considerations for the defensive staff.

The scheme will not be identical to that used by the Jaguars, but there are some facets of it that the 49ers could successfully replicate and facets that they will look to tweak slightly based on the personnel that they have available.