An entire house of Packer fans, a screaming Bears fan, and a kid who was just enjoying the attention.

My mom was reveling in the recent Bears success, to the chagrin of all the sad Packers fans. Sundays in Wisconsin are a battle every weekend in southern WI due to the tear in the community. We're closer to Chicago than Green Bay, but the Green and Gold runs deep throughout the entire state.

My mom was pretty sauced up by kickoff, talking trash to all of the Packer fans in our house. The Bears had just won the Super Bowl in 85 and her fandom was at an all time high. She had latched onto the Bears just to piss off my dad and all of his friends, and their success made her even more annoying.

I didn't fully understand the excitement around the game, but this day would end up being special. It was comical how quickly my mom's excitement turned to despair. For every interception Mike Tomczak threw that day, the reserve QB Steve Young launched another scoring strike. Touchdown after touchdown, my mother sunk further into her chair. The energy was exciting for me. The Packer fans reveled in her displeasure. Her trolling them before the game taught me what karma was. By the 2nd quarter, I was all the way in. Steve Young, Roger Craig, Jerry Rice would all become my heroes in a mere 4 quarters.

At the final whistle, the 49ers had steam rolled the Bears 41-0 and a 49er fan in snowy Wisconsin was born! 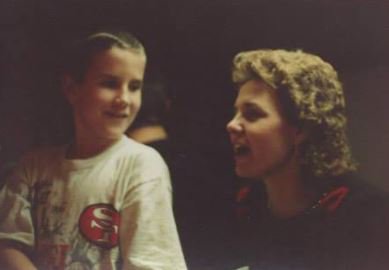