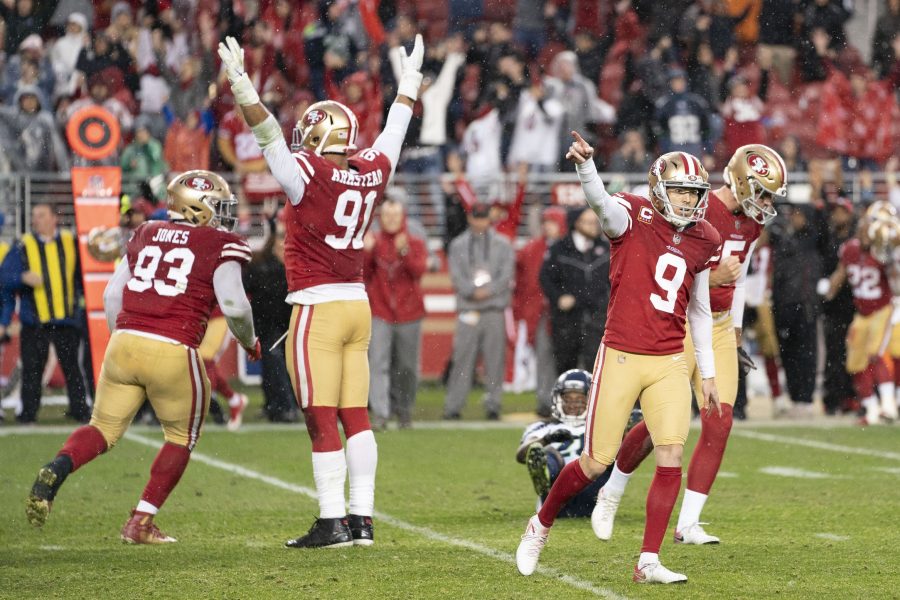 With free agency starting next week and the draft just over a month away, the frenzied NFL offseason is almost upon us. It is no secret that the 49ers are strapped for salary cap space, and have quite a few free agents many want to have back. A Super Bowl appearance just one year removed from winning 4 games has this team in win now mode, particularly because of how close this team was in winning the big game. This means that 49ers will need to be creative with their limited cap space and draft capital in order to put a better team on the field next year.

This got me thinking about what the 49ers could do to have a bold free agency period that would set them up with better players and more draft capital. Needless to say it would take some bold moves. I have put together a some bold moves for the 49ers to make that would set them up to win now, while still keeping the future in mind. Before I get into it, I just want to make it clear that these are very bold moves. It's likely that much of these won't happen. This is not a forecast, but rather a thought experiment. I will try to be as objective as possible in creating these trades, signings, and draft picks, but keep in mind my love for the 49ers is likely to bias my analysis here. Enough of the preamble, let's get to my bold offseason.

Trade Dee Ford to the Buccaneers for a second round pick.

I love Dee Ford. When he was in the game he made a huge difference to the pass rush. The problem is we're paying him $15 million to be a situational pass rusher. While that is important, that kind of money for someone who doesn't play base downs seems excessive. Trading him saves us $9.465 million for the 2020 season, which is enormous cap relief. He will make a great rushing partner with Jason Pierre-Paul and Shaq Barret in Tampa Bay, and with all their cap space and draft capital they will be happy to part with a second rounder to bolster their D-Line. We will get some sorely needed draft capital that will be helpful for our next moves.

This isn't super bold, as I'm sure others have floated different versions of this idea. However, given our limited cap space and the kind of salary Armstead will command, it seems like keeping him will be a death sentence to our cap space without making other drastic cuts. His 2018 season was solid, and 2019 season was fantastic. He will keep the Chargers line solid alongside Melvin Ingram and they will be able to get a second first round draft picks out of it along with a new solid and cheap running mate for Austin Ekeler. With the ascendance of Raheem Mostert, Coleman is expendable, and will save us $4.9 million in salary cap space. Joey Bosa has just one year left on his contract, and there are rumblings that he wants to join his younger brother in the Bay Area in 2021. So this allows the Chargers to get draft capital and a proven edge defender for him, and allows us to get two star edge defenders that will be playing the majority of snaps. The Bosa bros will terrorize the edges consistently, while Buckner and Day/Thomas/Taylor smashes the interior. The elder Bosa is expensive ($14.3 million for 2020), but with our new salary cap space and some other cuts, he can easily be absorbed.

Trade Marquise Goodwin for a 5th round pick (141 overall).

This is hardly bold since there are rumors already circulating that this is currently in the works. However, it seems necessary as it saves $3.6 million in cap space and nets the 49ers more needed draft capital. A 5th is probably fair given Goodwin's upside.

Sign Cameron Wake to a one year deal, and bring back Damontre Moore.

While the Bosa's are versatile enough to play base and passing downs, without Ford or Armstead we will need some quality depth behind them. Wake is at this point in his already long and accomplished career, a high end pass-rush specialist backup. He was quite efficient in a limited role last season, and is likely ready to chase a Super Bowl ring. Moore played well in the preseason and the limited snaps he got on the 49ers last season until he broke his arm. Both of these guys will be cheap and perfect backups to ensure there is little drop off when one or both Bosa brothers take a breather.

Trade both second round picks in 2020, a second rounder in 2021, and Jaquiski Tartt for the New York Giants first round pick and select Isaiah Simmons with that pick.

This is very bold, but before you dismiss this out of hand consider that the Giants are far from one player away from being back to contending. They haven't been the same defense since losing Landon Collins and getting Tartt to takeover at Strong Safety should help. Furthermore getting 3 second rounders over two seasons will be a boon to rebuilding around Daniel Jones and Saquon Barkley. Using the draft value chart just the two second rounders from this year bring us just over half way to the Giants 5th overall pick. Another second rounder plus Tartt should even out the trade. On our side, Isaiah Simmons is incredibly athletic and versatile. He switched to LB, but he can fit in at any LB position as well as SS. I would have him move back to SS as his length and versatility would be a perfect compliment to Jimmy Ward in the safety room. In the box he would be a nightmare, and has the ball skills and length to easily cover Tight ends that normally pose a matchup problem down the middle. He would truly help our secondary ascend to the next level.

Amukamara is a great corner who was a staple on a stingy Bears defense. However, he will be 31 before the season starts and has a lengthy injury history. That should ensure he is able to come at a relative discount, and if he can stay healthy will be an incredible starting option opposite Sherman. Thanks to the young potential we have in Moseley and Witherspoon we can afford to take a chance on the injury prone Amukamara. Ward really came into his own last season and proved why he is worth being the 49ers starting free safety. He was a fearless tackler and kept receivers from burning the secondary most of the time. With zero interceptions last year he still has room to improve as a ball hawk, but he is worth another contract.

The numbers don't lie, our pass defense improved markedly when Sanders joined the team at the trade deadline. Taking into account how much more difficult the second half was for the 49ers it only further solidifies the fact that Sanders was important in opening up the offense. Our receiver corps is very young and in that room he emerged as a leader for all of those young players. He clearly has more in the tank and giving him an average of $9 million a season for the next three years is very reasonable for what he brings to the team.

Call it sunk cost fallacy if you want, but I still think that when healthy McKinnon could bring something special to this backfield and I'm not ready to let him walk without playing a single regular season snap after all the money we have already paid him. After two straight injured seasons he knows he's a prime cut candidate and is reportedly willing to restructure his deal to remain with the team. Given Shannahan's ability to turn late round and undrafted free agents into great runners I think a running back room of just Mostert, McKinnon, Jeff Wilson, and a possibly a UDFA is more than sufficient. Especially when you take into account that Deebo Samuel (and probably Jalen Hurd) can take snaps out of the backfield along with the occasional Juszcyk carry, and the team should be fine without Brieda. Letting Breida walk as an RFA will be painful, but sometimes hard choices need to be made. He should land on his feet wherever he may end up.

Mullens is a fine backup, and if the front office is really married to having three QBs I would suggest a UDFA or 7th rounder. You save nearly $1 million by cutting Beathard and that money could be much better spent on a cheap 3rd option at QB and the remainder spread around to fund other draft picks.

After these moves it will certainly take some more creative cap maneuvers, but essentially what we are left with is a better defensive front and backfield as well as bringing back all of the important offensive pieces we had last year. Simmons and Joey Bosa should be the difference makers that will make our defense unstoppable. A healthy Hurd, McKinnon, and Taylor will be a big help to the offense. Hopefully Pettis could recapture the promise he showed in his rookie season and Bourne can build on production in the second half of last season. Samuel looked unstoppable at times last season, and being able to build off that will be crucial for the 49ers pass and run game. Additionally, the deep wide receiver class could provide a diamond in the rough with one of the three 5th rounders the Niners will have under this scenario. Jeff Wilson has improved each of the last two seasons and I fully expect him to continue that trajectory next season, which will bring together a solid backfield. A full offseason in Shanahan's scheme will do Sanders a lot of good, and another year removed from the ACL should allow Jimmy G to improve upon what ended up being a very solid 2019 campaign. While I fully expect that most of these moves will not be made, I believe that doing so will set this team up for a repeat Super Bowl participant. And this time we will win.