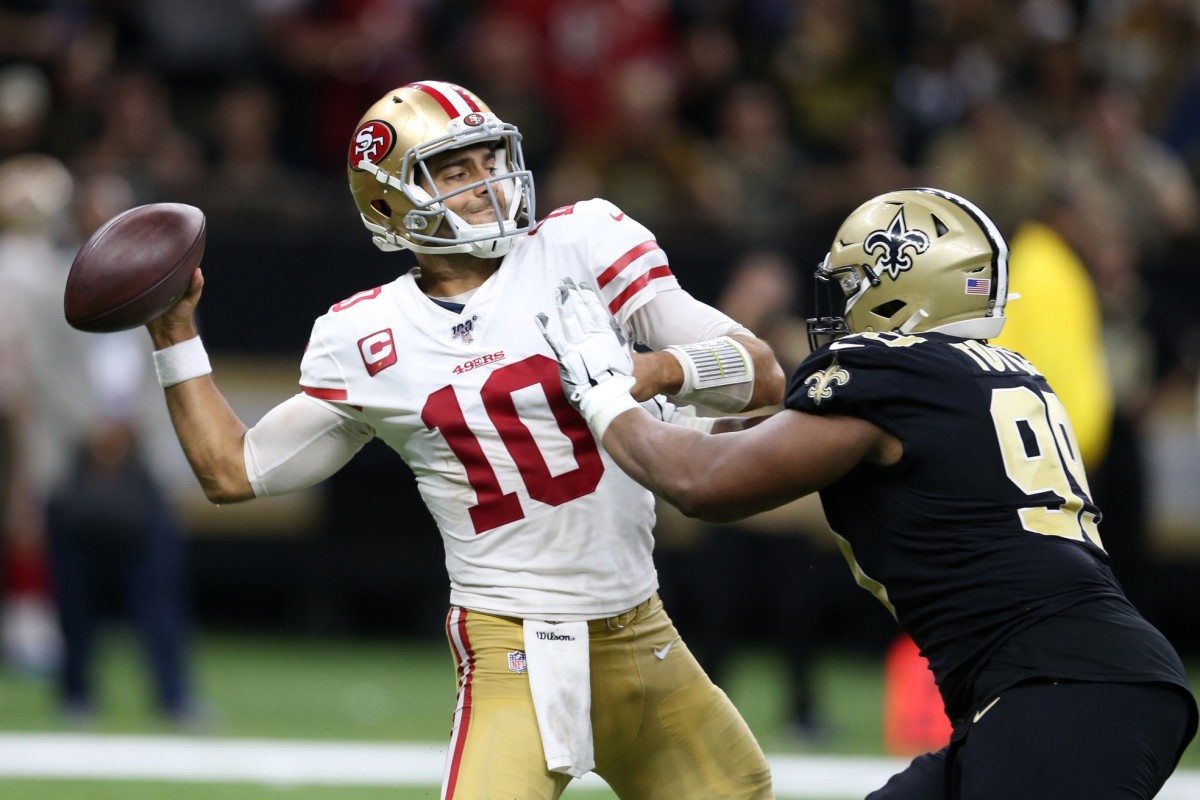 Jimmy Garappolo's recent play makes him increasingly marketable in the off season. When you consider that the Colts will pay 1st rounder (and a 3rd) for an oft-injured, horribly overpaid, and badly performing Carson Wentz, you begin to think that Jimmy might fetch at least that much.

Then there's the fact that the 2022 crop of college QBs is universally considered rather weak. If you're sitting high in the draft, like a Carolina or NYG, do you waste your pick on a QB of questionable worth? Or do you trade for a proven vet like Jimmy G.?

Different teams will answer that question differently, but it's quite likely that some team will see Jimmy as the far better option than reaching in the draft for a QB who may lack the ability to help.

As KP wrote and quoted here: "Ian Rapoport reported the Niners' plan to trade Jimmy Garoppolo during the offseason and hand the keys over to Trey Lance next season:"

"Absent a Super Bowl run, which at this point is still theoretically possible, this is the 49ers’ plan next season: start Trey Lance, trade Jimmy Garoppolo. Not a surprise there, they’ve been pretty up front about that," Rapoport said Sunday on NFL GameDay Morning. "What Garoppolo is doing now is increasing the value of picks the 49ers get in a trade involving him, and they make it more likely that a place he wants to go would want to take him."

For my money, I like Jimmy G going to New Orleans. Taysom Hill tossed four INTs vs. Dallas last night. We already knew he wasn't the answer, and he's going to prove that over the last stretch of the season. That's a team that could and should be in the playoffs. They just need a solid QB. They're currently sitting at #13 in the first round.

What about the Cleveland Browns? That's another team that should be in the playoffs, but are suffering behind Mayfield's crappy play and lack of leadership. At the moment, they sit at #15 in the draft.

Does Pittsburgh go into full rebuild mode? Or do they see a QB like Jimmy as a way to stay competitive with their current roster? They're slotted at #16 in the 2022 draft.

The Broncos--at #17--could certainly use the help that a Jimmy G. could provide. They too may see themselves as a QB away from contention.

Higher in the draft at the NYG and Philadelphia. The G-men currently would have two top-10 picks. Is Jimmy worth that? No sir. But what if some draft capital came back the other way? More intriguing are the Eagles, with what would be three top-15 picks! Wouldn't it make sense to let one go, if they're ready to move on from Jalen Hurts? They could have Jimmy and still have two very high picks in the draft.

There are other teams that could be sorely tempted to trade for Garappolo, especially if the price dropped to, say, a 2nd rounder and change.

But when one considers the weak QB draft class and the prices paid for QBs like Wentz and Sam Darnold (a 2nd, 4th, and 6th), it's reasonable to think of the 49ers might land some solid draft capital for 2022.

Considering that we lack a 1st rounder in the upcoming draft, getting one back for Jimmy would be a fantastic asset for our rapidly rising team.