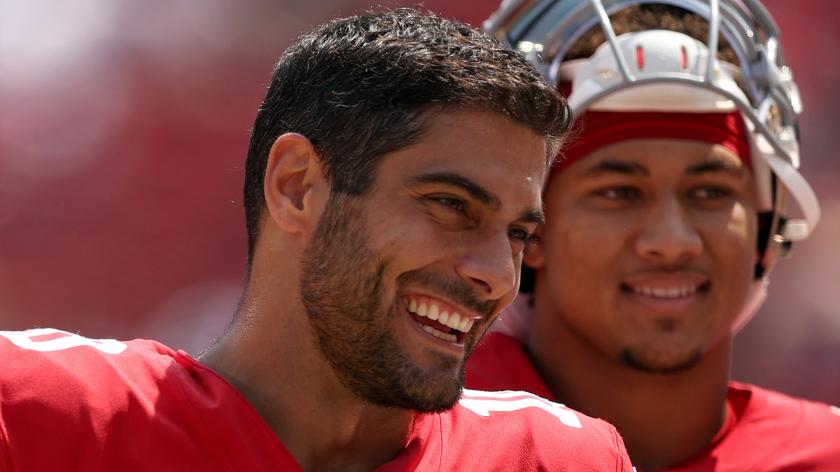 Last nights game was where a few things clicked for me. Just observations that really got cemented and also gave me some insight into past events.

And no, I'm not talking about Jimmy's 2 minute drill TD drive to give us the lead with 37 seconds left...nor am I talking about the defense giving up those two plays to Rodgers and Adams with no timeouts left. I'm talking about before the game even started.

This was supposed to be a GB team that was not good on defense. Couldn't stop the run. And was apparently missing their best pass rusher. Likewise, they were apparently on their 3rd string LT and RT and supposed to be ripe for the feasting for our D-line.

We have George Kittle. We have Deebo Samuel. We have Juice.

Our team never should've been down 17-0 in the first place. But we were.

And while not having our starting RBs in to play is definitely a part of that...a large chunk falls on Jimmy's shoulders.

He is limited though, and those limitations are becoming more and more clear to me. Kyle has to scheme up a lot of trickeration to make this offense work for him. He's not Matt Ryan. And he's not even Kirk Cousins.

Shanny was right, Lynch was wrong - we should've gotten Cousins. Kirk is Jimmy...who can complete the long ball. We win the SB in 2019 if we had Kirk Cousins.

Maybe part of it was watching Bucs/Cowboys Week 1 and Bucs/Falcons last week...or Rams vs Bears and Rams vs Bucs. But our guy can't do what Brady and Stafford can.

We can still win with him and I trust Shanny as to when Lance is actually ready to start, but we can't beat the best teams. Not playing like we did the first 3 weeks.

Teams have figured out some of Shanny's tricks, and you take those away - and Jimmy is not good enough to beat the best teams on his own. (This is probably something Shanny actually knows himself - hence the picks for Trey Lance, Banks, and Sermon and moving to more of a power running scheme with Lance that incorporates both play action and read option.)

We can beat the Bears, Jags, Colts, etc. Those kind of teams.

But we need to look at letting Trey have the 2 weeks of the bye and home game (SNF again) against the Colts week 7 to start...if he's ready. (plan B would be week 9 or 10 in our 2nd game against the Cards or first against the Rams)

I will root for Jimmy and the team to win every game he starts, always. My hope is that Lance doesn't need all year to sit...if he does, we might still make wildcard and maybe win one playoff game, depending on the matchup. But the writings on the wall.

Thanks for everything Jimmy, and for making this team relevant and a winner again. But it's time for us to move on.