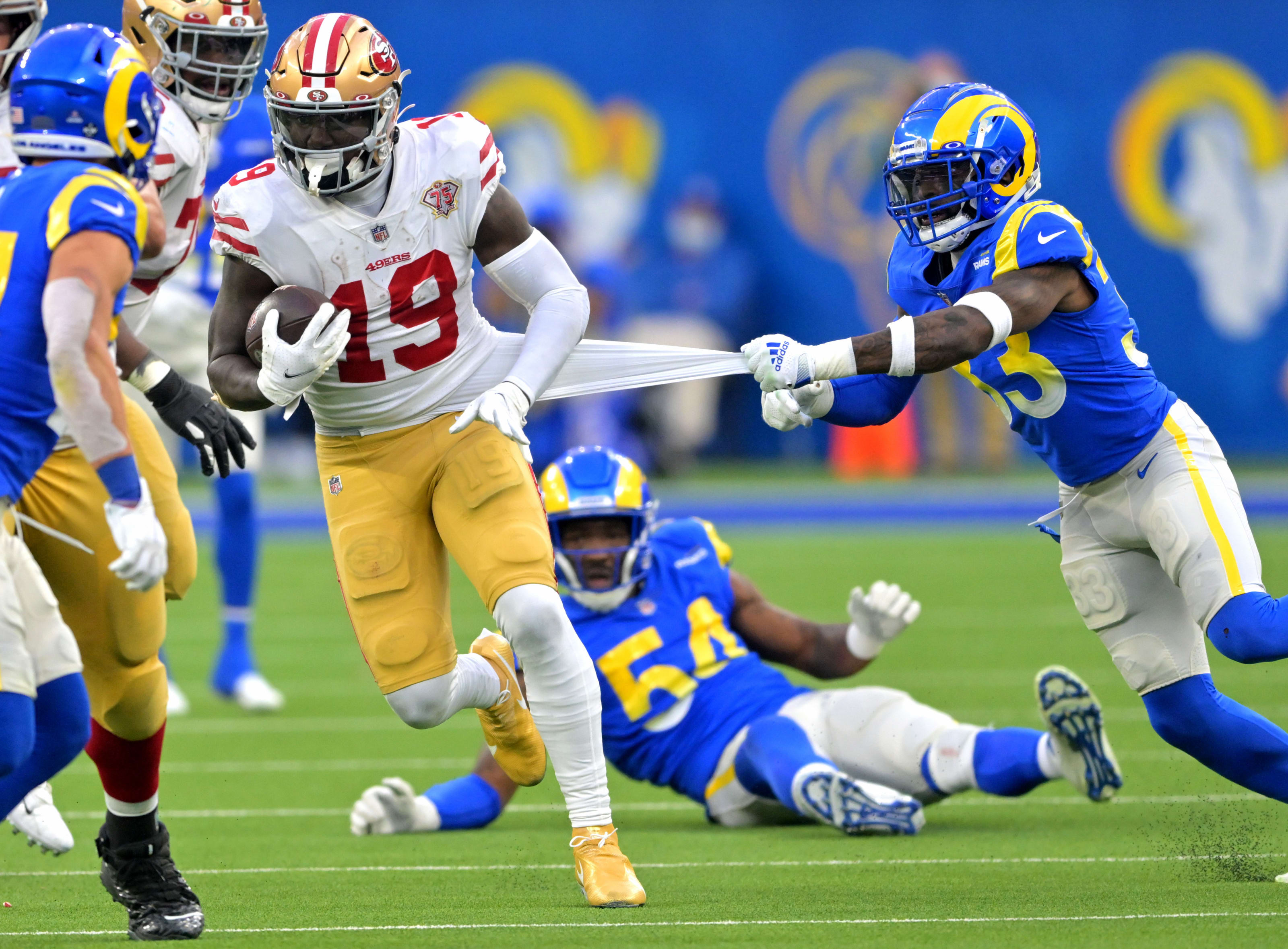 Deebo Samuel leads the charge against the Rams in Week 18

The 49ers were never Super Bowl favorites this year. Not without Richard Sherman and DeForest Buckner, two defensive stars that propelled their unit to dominance in 2019. Not when they held onto their incumbent $27 million quarterback after mortgaging a decent chunk of their future for a bright but raw prospect in Trey Lance. Certainly not when their best remaining cornerback and best running back took brutal exits in week 1. Credit everyone who made the season's final line of 10-7 look as pretty as it does. You still won't find anyone ranking the 49ers above the Chiefs and Packers and Bucs to win the Big Dance. But every season is built differently, and the biggest game isn't always the last one. This year, no matter what, the 49ers' biggest game will be Week 18 against the Rams, their own personal Super Bowl.

Sometimes, defining games are electrifying, like the 2012 divisional romp where Kaepernick left his mark by rushing a sizzling 181 yards against Green Bay. Some are an emotional Hail Mary, like the 2019 Clinch by an Inch game where Dre Greenlaw became the second coming of Dan Bunz. And some are referendums on the team in its entirety, where the fate of the franchise balances on every second of the play clock, every hour of preparation, and every organizational transaction made since the February prior. On Sunday, the 49ers needed every single one of those moments to pay off in order to finally tell us the story of who they really are.

From kickoff, this game was a microcosm of the 49ers' season. San Francisco started slow, trading punts for points, digging themselves into a deeper and deeper hole. This has not been a team fast on the draw. The 49ers' dismal start to the season mirrors the fact that 9 times this year, they failed to crack double digits in the first half. The agony was certainly familiar when a Matthew Stafford-led scoring drive jacked the deficit up to 17-0. It was only in the face of that desperation, that overwhelming pressure, that the 49ers finally began forcing their heads above the choppy waters of adversity.

The field goal drive at the end of the first half will be talked about for a long time, and rightfully so. The 49ers had just been picked off just outside the two-minute mark. Another score of any kind would have put the nail in the coffin of the 49ers' 2021-22 season. But right when things looked darkest, the 49ers were given a gift, another tilt at the Rams. A slow-developing pass on 3rd and 1. San Francisco struck back, wresting away control of the momentum. It was a small victory, just one mark in their favor towards a much larger goal, but they took that opportunity and ran with it. The 49ers roared back with a vengeance, piling on the points to even things up with plenty of time left to pull away. For a team that looked dead in the water, it's hard to believe that one simple pivot point could launch them back into the fray, but this 49ers squad never stopped believing.

But even with the wind at their back, San Francisco's incredible effort was only enough to provide them a chance, and squandering that chance was far more possible than our emotional highs would have had us believe. This team isn't, in fact, perfect. And while there are defensible, if not sensible, reasons for that, it still hurt to realize that the 49ers can be overcome, outplayed, forced to make backbreaking mistakes. So, the 49ers, forced into a position where their playoff survival required a razor-thin margin for error, had to prove they could stay in it. It wasn't always pretty. Punting away a drive right near the end made every 49er fan cringe, worrying about what this meant for the last sliver of the schedule. But they made a stop when they needed to.

This is where I break from the narrative for a second to concede that losing to the Titans and then winning against the Falcons is absolutely nowhere on the same scale of improbability as punting the ball with 1:57 on the game clock, down by a touchdown, and then forcing a three-and-out to get it back with time remaining. But this 49ers team stayed with it. Given one last shot, one last opportunity, they faced the Rams in their own house and dominated them, pulling out a little Jimmy Jesus magic to stay even once again. To give themselves one last chance. And with Sean McVay capitulating to bring both teams to a winner-stakes-all scenario, the 49ers had finally caught up. After 60 minutes of hard-fought football that grinded on both the physical and emotional level, the 49ers had shown just enough. They'd proven that after 17 games, they still weren't going home.

And thus, the 49ers playoff saga had begun. On Sunday the 16th, it will officially kick off, but a week before that was when the clock really started ticking. The playoffs have never been about the trophy itself; no one wants to win because the Lombardi Trophy is just too fashionable not to have in their display case this summer. Everyone wants to win because losing means going home. It means being told you're not allowed to stand on the same field as your peers. It means dejection for everyone except the ones who had to stop playing because there was no one left to beat. In that sense, the 49ers playoffs and their sprint towards their ceiling began the moment overtime started.

With the ball in their hands, the 49ers began forging the next chapter of their story, and they did it with the things they can do right now. They did it with explosive rushing gains that kept them ahead of the chains, and they did it with intermediate strikes from Garoppolo that let his receivers rumble for YAC. They did it with a defense capable both bending *and* breaking, but a defense that's nevertheless risen from one of the worst in the league to one of the best. In this way, they established their formula for continuing to play games this season. It's not a surprising formula, even if it's surprising that it worked, but it's what Shanahan and Lynch have been banking on this whole time. They scored with an efficient offense, and their defense stood tall with a devastating pass rush and a secondary that's building the railroad track in front of them as they steam forward. This time, they built themselves a path to a game-winning interception. And their potential very well may be the fate of this team, as we find out whether they'll continue to grow, or if this was them stretching out for the best they'll ever get. As a pollster might say, "So goes Ambry Thomas, so goes Niners Nation."

But make no mistake about what the 49ers did that fateful Sunday. With their backs against the walls, they proved their direction was just. This is no franchise ambling about, making reckless decisions and wanting to win, but not willing to put in what it takes. This is a team with the capacity to win against anyone, a team with stars and leaders, for whom the future is bright. When the ultimate prize is being able to say just that, being confident that you can compete for years to come, then yes- the 49ers just won their personal Super Bowl. 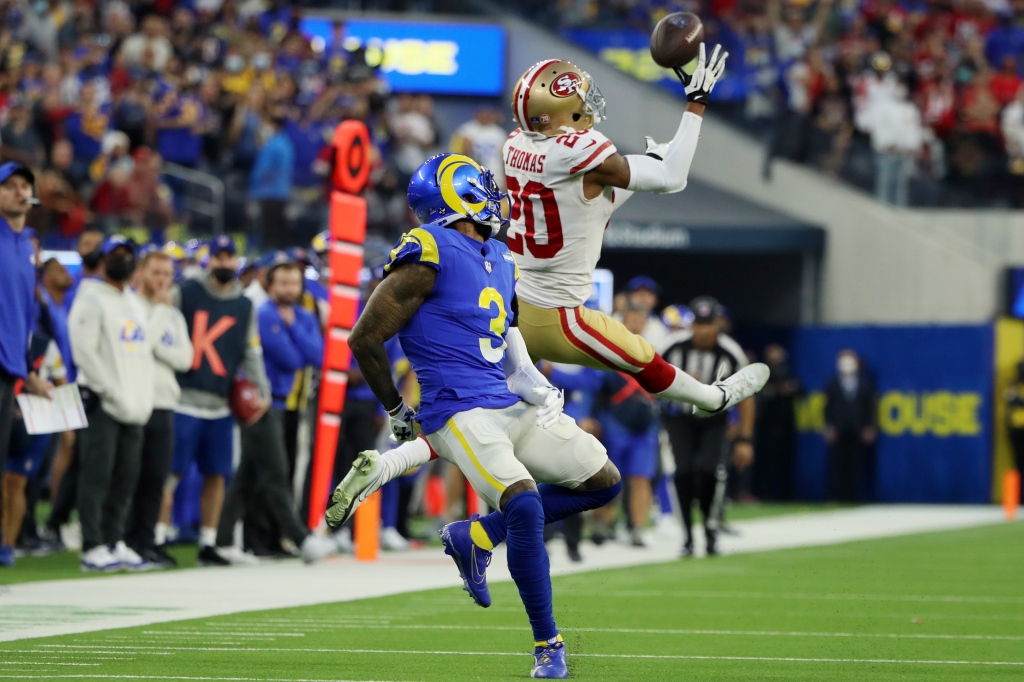 Ambry Thomas leads the 49ers to the playoffs with an interception against Odell Beckham Jr.