I got a gopher couple days ago... trap nailed it! True story. Pic to follow at the end of this post, so for those of you that are sensitive don't scroll down. haha

Brock Purdy. Now that's a story! Looked pretty good in that one game. Of course, we know how *that* can go either direction. Fun times. I fully expect at some point Shanny himself will go on the injury report cause he tripped over his headset cable or something stupid. Good grief.

A while back I had covid. Boy howdy that shit sucked. I'm not sayin' I'm all spooked about the vid, but I spent a long time just kinda rolling my eyes at it. It finally found me. And it wasn't a friendly sort, but I beat it. However...

My calling the GF names of my past romances while I was in the throes of a super high fever didn't help things. Fortunately I was able to fight off the pillow she placed over my face even in my weakened state. We've reconciled since, and no harm no foul.

Of course... I still had to get some semblance of revenge, so I put a piece of black electrical tape over the back-up camera on her car... still hilarious to hear her bitch that something's wrong and I'm like, "Read the manual, babe!"

Alright... why hilarity? Cause I'm busy 24/7 trying to eradicate gophers and moles and skunks... and what did we just recently get? An F'ng hamster. A very close relative of the shit I'm trying to send to the afterlife. Well, not the skunks. I just tried to relocate them. But still!

And the best part... the new hamster home is in our old fish tank... a tank that, btw, was a never-ending source of irritation. I don't get how people have multiple fish tanks and always have the water parameters perfect and clean the filters and deal with ick and... and... and... yeah. God that shit was annoying. Just wanted some fishies, not a lesson in chemistry and sludge removal. Fish tanks... or for you fancy people that actually do it correctly "aquariums"... can bite me. Seriously.

Ok... the gopher I caught in a trap. Look away now if you're sensitive! haha 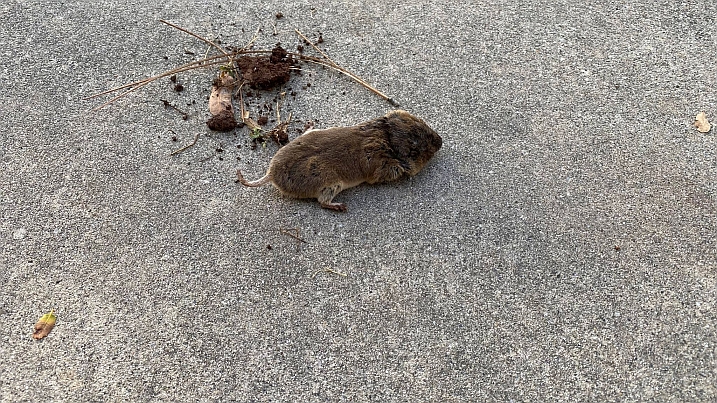